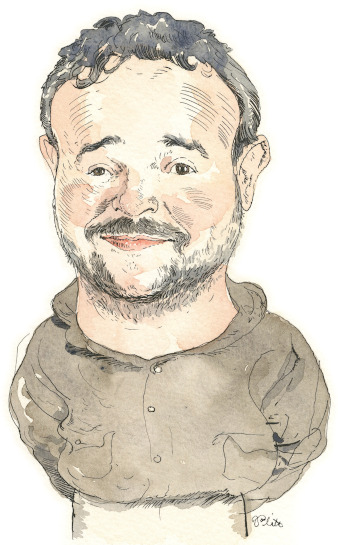 Years ago, as Highland Park film/video visionary Simon Leibovich prepared to videotape a Wood Family Foundation holiday gift event at a school in Chicago, a scene unfolded that surprised him.

Former Chicago Cubs fireballer Kerry Wood and his wife, Waukegan native Sarah—the altruistic couple behind the foundation—showed up early to do all kinds of heavy lifting. Kerry set up a Christmas tree on the stage while Sarah lugged bulging, boulder-sized duffel bags filled with gifts.

Not an elf in sight.

“The first thing I thought was, ‘Where’s the Woods’ team of helpers?’” says the 44-year-old Leibovich, a 1995 Highland Park High School graduate and the president of Vernon Hills-based Elevate Creative Group, a boutique digital marketing and web development agency.

“But, you know what?” he adds. “I found out, on that day, that Kerry and Sarah Wood are super-nice, super-committed people, as well as the first two to arrive, and the last two to leave, at a Wood Family Foundation event.”

Leibovich’s eye behind the camera has also captured the Wood Family Foundation’s Pitch In program for students in several Chicago neighborhoods, including North Lawndale and Humboldt Park. It’s an after-school model that employs high-quality mentoring relationships and exposure to unique experiences to ensure fourth-through-eighth graders develop the academic and social/emotional skills, mindsets, and agency necessary to transition to high school successfully.

“I got to shoot one of the Pitch In program’s remodeled classrooms,” says Leibovich, a content creator for the Wood Family Foundation for more than a decade. “You should see the investment the Woods and their foundation have put into the cause—at a cost of $0 for each student. It’s amazing. It’s wonderful. And they have plans to expand it in several other neighborhoods.”

Leibovich compiles moving footage at Wood Family Foundation events every year and then showcases the montage at the foundation’s Storybook Gala.

For two years he was the Society’s vice president. There’s a funny story behind that designation.

“I had to miss a meeting one year, and I found out, via email, that I had been named VP at the same meeting,” Leibovich, still stunned, says.

“Had I been there I would’ve voted a big nay for myself,” he cracks.

Each June, Leibovich travels to Camp Ojibwa in Eagle River, Wisconsin, to videotape the Brian P. Schwartz Basketball Tournament. The tourney was named in honor of Schwartz, who died from a heart attack at the age of 37 while playing basketball in Highland Park. Many of the participating hoopsters counted Schwartz as a good friend.

Leibovich films the fast breaks, the breakfasts, the alley-oops, and, perhaps, a few oops moments off the court.

All get to cherish Leibovich’s work afterward.

“I always knew I’d end up doing something behind a camera,” says Leibovich, who was active in theatre and took a directing class at HPHS.

One of his most memorable video ops had to be the time he spent with Highland Park neighbors JoBe Cerny and David Rudman. Cerny is the current giggly voice of the Pillsbury Doughboy, and puppeteer Rudman performs the Cookie Monster of Sesame Street fame.

Lucky Leibovich no longer has to imagine what animated conversations between the two characters sound like.

Years ago, in Vancouver, he began a considerably more serious project, this one centering on Insite, a legal and supervised injection site for drug addicts in the city’s Downtown Eastside and the first facility of its kind in North America. Leibovich interviewed then-Vancouver Mayor Sam Sullivan, among other figures.

The working title of the documentary he directed and edited is 100 Block.

“They’re now calling it a supervised consumption site,” Leibovich says. “I learned that one year 365 people died by overdose in a four-block area of British Columbia. One overdose per day. It was intense, some of the stuff I saw.

“The mayor of Vancouver told me, ‘The victims are suffering more from a disease than they are from addiction.’”

Born in Cleveland as the middle child of Leon, a former sweeper for the professional Russian soccer team Zenit, and Irena, Leibovich grew up in Lincolnwood (through eighth grade) before moving with his family to Highland Park in time for the start of two-a-day HPHS soccer practices in the summer of 1991.

“My father is super bright and a super hard worker,” Leibovich says, adding Leon delivered coffee before entering the field of mergers and acquisitions. “He hustled, was such the worker bee, and somehow got us a nice place to live in Highland Park. He was a great parent when I was young; so was my mom.”

In between soccer practices on an August day in 1991, he met a 14-year-old named Lauren, his future senior prom date. They attended school together at the University of Arizona—after she had relocated to Los Angeles and he had completed semesters as a film major at Columbia College Chicago.

Years later Leibovich, the owner of Flounders Bar & Grill in Chicago at the time, looked up from behind the bar one day and noticed Lauren had entered the establishment with friends.

The boys play soccer and basketball and have scurried atop the same Centennial Park fields that their dad did. Alexis is into hip-hop dance and has been tapped to teach at Sole 2 Sole Dance, Inc., in Highland Park.

“Sometimes,” Leibovich says, “I feel like an Uber driver for my kids as a father, but fatherhood, I have to admit, is the best.”

Yes, pinball. He must. Nine such machines, after all, stand at Elevate Creative Group’s office.

It says so on the company’s site.

So does this: 235—the average employee age in dog years.

And to inject a little levity along the way.