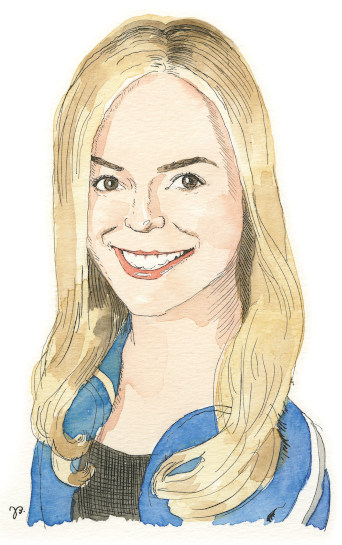 It doesn’t take much to remind Veronica Lilja Brugioni to make sure every day in her chosen profession is a stirring one.

A gander at the name on the door of her workplace in her native Lake Bluff—O’Hare Irish Dance studio—does the trick.

Brugioni, 30, named her studio, which opened in 2019, after the late Tim O’Hare, the Arthur Murray of Irish dance teachers who instructed, inspired, and mentored Brugioni for the entirety of Brugioni’s decorated competitive career (ages 5 through 18).

O’Hare died of stomach cancer at the age of 58 in 2019, months after Brugioni welcomed her first batch of students at O’Hare Irish Dance’s 1,900-square-foot space on Herky Drive.

“It’s still devastating to me that he’s gone,” says Brugioni, a 2010 Lake Forest High School graduate. “He was a second father to me, a teacher who truly cared about his students as people, not just as dancers. Those connections often continued after the final lesson for those who danced for fun, and after the final competition for those—like me—who loved to compete.

“My teaching style is similar to Tim’s, and my sense of purpose has been strong since his death. My studio survived the tough times during the pandemic; I found ways to keep it going. As long as Tim’s name welcomes our dancers at the entrance of my studio, I will not fail.”

Five of Brugioni’s stellar dancers, ranging in ages 10 through 18, will compete July 1 to 5 at the North American Irish Dance Championships in Montreal. Their names: Bridget McGovern, 10, of Lake Forest; Aly Mastracchio, 10, of Libertyville; Allison Kolber, 15, of Gurnee; Katie Bradley, 16, of Lake Bluff; and Sophie Puszynski, 18, of Lake Forest.

“All of the dancers that qualified,” Brugioni says, “are not just from North America. Most of the best Irish dancers in the world will be there. I’m excited for my girls. But I’m also thrilled for the up-and-comers at my studio, because the bar has been set high for them, and now they know what it takes to become an elite dancer—if that’s what they want to become.”

Brugioni says a little more than half of her studio’s 80 charges (ages 3-18) train to perform at prestigious events. The others are in it to have a blast and make friends for life, among other reasons.

“We work around the practice schedules of those who want to continue in their sports,” says Brugioni, who considered playing sports at LFHS but opted to focus solely on Irish dance because, she recalls, “I was an all-or-nothing person at the time.”

The daughter and youngest of three children of Larry, Northwestern University’s first director of strength and conditioning (1981-2011), and Kelly Lilja, Veronica was 3 when she took her first Irish dance lesson in the basement of the Church of St. Mary in Lake Forest.

It was love at first step.

A year or so later, Kelly researched highly reputable Irish dancers and discovered that a Tim O’Hare taught one of the most athletic dance disciplines at locations in and near Des Plaines.

“I observed one of Tim’s classes before becoming the youngest, by far, in a class of 15 to 20,” Brugioni says. “And I remember it vividly. The way he interacted with his students; how supportive he was … I went up to my mom and asked, ‘When do I get to start working with him?’

“That day I felt the same way I did when my grandmother (Vera) and mom took me to a theatre production of Riverdance. I became obsessed with Irish dancing.”

Brugioni was 8 when she made her first Midwest Championships appearance, in St. Louis. She won her first regional title at the age of 11 and her second three years later. She finished third in her age division at Nationals and 17th at the World Championships (in Ireland) as an 11-year-old.

A broken foot and severely damaged ankle couldn’t keep an 18-year-old Veronica from vying for the top prize at Nationals—and, incredibly, qualifying for Worlds.

Brugioni attended Purdue University in the fall of 2010, setting out to major in health and kinesiology. But the irresistible pull of Irish dance yanked her out of college and placed her in the field of Irish dance instruction along the North Shore.

“My year at Purdue was my first (since the age of 2) without Irish dance,” says Brugioni, the mother of Cassidy, 2, and Cody, 3 months, with husband and City of Lake Forest Streets Supervisor Matt Brugioni (LFHS, ’09), who’s also a real estate broker.

“I’d missed Irish dance so much. So much so that I’d return home on long weekends to catch up with Tim and watch him teach classes.”

Brugioni traveled to Limerick, Ireland, to earn her Teagascoir Choimisiuin le Rinci Gaelacha (TCRG) certification. The process lasted four days. She first taught Irish dance at the Lake Bluff Park District, before conducting classes at the Lake Forest Recreation Center. Youngsters signed up for Brugioni’s classes at the Libertyville Sports Complex, too. Private Irish dance lessons with Brugioni were held in her parents’ garage. Dad Larry—now the football strength and conditioning coordinator at LFHS— built a wall-to-wall dance floor for his daughter inside the former home of the Liljas’ vehicles.

“My parents have been so supportive,” a forever grateful Brugioni says.

Veronica and Matt got married in Mexico in 2018, after a courtship of about five years. Veronica danced with Matt and her father at the wedding reception.

Maybe he asked the bride, “Shall we dance?”