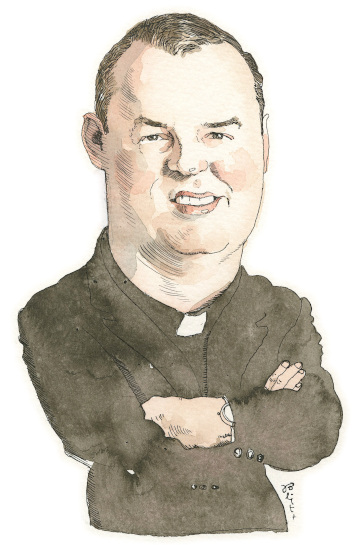 Forgive Rev. Gregory Ostdiek, SJ, if he shows up for the first day of his tenure as Loyola Academy president in head-to-toe runner’s gear and a racer’s bib on July 5.

The former cross-country runner and distance track boy at Carroll High School in Dayton, Ohio, is on his mark again and set to begin a challenging, and likely fulfilling, journey.

“Right now, I have the same pre-race feeling that I had in high school, on the day of my team’s first cross-country meet in the fall,” recalls the 6-foot-3 Ostdiek, who lives in Evanston and still runs between three and four miles every other day. “But it’s not a nervous feeling, because I’m at the start, thinking, ‘I’m well-trained, having put in the miles all summer.’

“I’ll be doing a lot of walking and listening in my first semester at Loyola, and I’ll ask questions, all kinds of questions. I like listening to people, hearing their stories. I’ll ask the students, ‘Why Loyola Academy?’ because they could be anywhere. But they’re here. I can’t wait to hear their answers.”

“Last November, after I had been appointed, Pat said to me, ‘Greg, you’re ready for this job. You can do it. And you’ll have fun doing it.’

“I’m tremendously excited to join Loyola Academy in its mission of forming women and men for others in service to the Church and the world.”

Ostdiek, who holds B.A. degrees in mechanical engineering and English from the University of Dayton, was a lieutenant commander in the U.S. Navy in 2008 when it hit him—he’d been called to navigate another vocation.

“I basically realized I was in the wrong uniform,” says Ostdiek, who, after a career in the Navy spanning 12 years, joined the Jesuits in 2008, teaching physics, coaching athletics, and serving positions in campus ministry at several Jesuit schools during his novitiate.

“That’s the one-sentence answer to what actually was several years of discernment and then mustering up the courage to make the right decision.

“God,” he continues, “sometimes makes it abundantly clear to you what his plans—or expectations—are for you, and then you either make the gut check or you don’t.”

Loyola Academy was one stop (2014-2016) on his path to ordination in 2019. Ostdiek taught physics and served as an assistant coach for a state-qualifying Science Olympiad team at the home of the Ramblers.

He has served as a parish priest and a prison minister.

Ostdiek knew, as a senior in high school, that he’d pursue the unusual Englishmechanical engineering double major at Dayton.

“Engineering appealed to me because I like knowing how things work, and I’d always loved English and admired those who had the ability to communicate well,” Ostdiek says. “Math, to me, is a subject you can use as a language and as a tool.”

Fritz and the late Rita Ostdiek raised Greg and his twin, Gary, in Beavercreek, the second-largest suburb of Dayton. Fritz was an all-state center and nose tackle in football-mad Nebraska in the 1950s. He somehow played his entire senior season at those demanding positions with one good arm and one dislocated shoulder. Fritz served as a bomber pilot during World War II and worked as a research engineer at Wright-Patterson Air Force Base in Green County, Ohio.

“My dad was a jet engineer—a really cool job,” Ostdiek says. “He’s smart, knows how things should be done, and wants them done that way. Dad learned soccer and became a soccer coach at the age of 40. He coached my seventh-league soccer team to a 14-0 record and a league championship.”

“My dad was the coach of our household, while my mom was the captain. Mom kept the house clean, organized, together.”

“I didn’t know who he was, but the seniors on my team sure did,” Ostdiek says. “He was approachable, loved the runners, and loved running. He’d complete workouts with us at every practice and then work out on his own after practice, going a hard 10 miles. Coach Agnew was a mentor and almost my third parent.”

More mentors provided guidance for Ostdiek in the Navy. He served on a variety of ships, including as navigation instructor; a reactor training assistant on the USS John C. Stennis; and an executive officer and navigator on the USS Dextrous, which was deployed twice in the Arabian Gulf.

“Two men in particular taught me so many elements of leadership,” Ostdiek says. “Captain Craig Langman had this gusto for life that was contagious. He’d bike to work and play water polo, hard. He was loud and passionate about life. Then there was Jim Kilby, second in command. He led by love, with a deep respect for his fellow sailors.

“I learned a great deal from both men.”

“Gratitude,” Ostdiek says, “is a key part of Loyola Academy’s mission. I’m grateful that our school has so many top-notch qualities.

“I can’t wait to help our students take advantage of what Loyola Academy has to offer.”

Founded in 1909, Loyola Academy (located at 1100 Laramie Avenue in Wilmette) is the largest Jesuit high school in the United States. It annually enrolls approximately 2,000 students, who come from all over the Chicago metropolitan area representing more than 90 ZIP codes. For more information, visit goramblers.org.