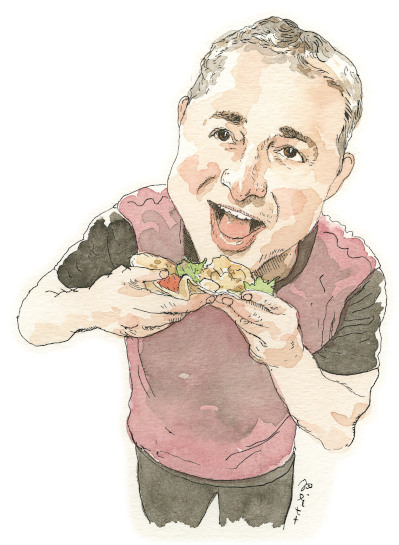 The butterflies in the stomach of the owner of Max’s Deli in Highland Park have been flitting incessantly since he committed to spend the month of July at the Hope House Orphanage in Cambodia, where he’ll teach cooking to the youngsters, encourage them to eat healthily, and build working kitchens.

“Of course, I’m scared,” the amiable and highly animated Morelli, 52, says. “I’m scared right now, just thinking about it. But you know what? I like uncomfortable. I’ll let the universe guide me. The universe won’t let me let those kids down in Cambodia. The person who’s in charge of the orphanage’s kitchen is a 14-year-old girl.

“I was made to cook, and the ability to share my skills with disadvantaged youth will certainly change lives—including mine.”

The Hope House Orphanage is a subsidiary of Hope For the Silent Voices, a nonprofit founded by former Deerfield resident and first responder Eric Lyons to bring attention and resources to the severely neglected, disadvantaged, abused, and discarded globally.

Morelli, a 1988 Highland Park High School graduate and the owner of Max’s Deli since 2011, met Lyons at a local fundraiser last year. They hit it off, instantly.

Both men will be at Joey’s Food Fight launch event and fundraiser at Max’s Deli (191 Skokie Valley Road, Highland Park) on May 24, from 5:30-7:30 p.m. Joey’s Food Fight was created to fund Morelli’s travel chef residencies, and the family-friendly event at Morelli’s high-volume, New York-style deli will feature fun build-your-own food stations, such as taco and macaroni-and-cheese bars, a salad chopping block, a Vienna hot dog cart, and a S’mores bar.

DJ service will be provided by Deerfield-based Bizar Entertainment. Founder Jeff Bizar and Morelli became good friends while attending the University of Illinois in Urbana-Champaign.

All money raised will go directly to Hope House Orphanage in Cambodia.

“I plan to a travel blog to let everyone know how I’m feeling at all points during the mission—the first of many,” says Morelli, a Chicagoan who’s a board member of Stand Up For Kids, an organization that empowers homeless youth. “Right now I’d like to complete a total of 10 missions like this, perhaps one a year. My life is all about food; I knew I wanted to be a chef at a young age. I’m a worker. I love working. I put my head down and work.

“After meeting Eric at that fundraiser, I knew—just knew—that I had to propose to cook, and cultivate a lifelong skill, for the Hope House residents in Cambodia. I’m going to do the best I can over there.”

Morelli was hooked on cooking as soon as he made a frittata at home one day. He couldn’t escape food as a Sunset Foods bag boy in high school. He also couldn’t stick as a defensive end on Highland Park High School football teams.

“I was terrible,” admits Morelli, who had visions of donning a toque while turning in his football helmet after two seasons.

Morelli majored in Restaurant Management at Illinois (Class of 1992) and, after time spent in Colorado, earned his associate degree in Culinary Arts at Kendall College when the college was located in Evanston.

One of his first post-Kendall jobs was line cook at Gordon Sinclair’s famous fine dining restaurant in the Loop, where he eventually served in the pastry kitchen (his specialty: soufflé cake).

His first day was a harrowing one.

“I was asked to cook two cases of lobsters, or about 30 to 40 of them,” Morelli says. “I’d never done that before. I had to kill the lobsters.

“I cried the whole time.”

His next stints were at city restaurants Spruce and Marche.

“I built my foundation for cooking while working those first few jobs after Kendall, right down to cooking broccoli right,” Morelli says.

In 1996 he worked at Wright’s, an upscale restaurant at the Arizona Biltmore, before heading to California to toil as a butcher and sous chef.

He then headed east—way east—to serve as executive chef at Citrus Bar & Grill in New York.

Morelli returned to Chicago and opened Joey’s Brickhouse in the Lakeview neighborhood in 2003. He sold it after eight years and acquired ownership of Max’s Deli shortly thereafter.

“I’m still evolving as a boss,” Morelli says. “You have to be nice to all employees at all times. We’re a team, and I’m no more important than a server or a dishwasher.”

Among his passions before and after work hours are pickup basketball games at LA Fitness, scuba diving, skiing, and golf outings with his 81-year-old father, Frank.

“My father is the best repair guy I know,” Morelli says. “I can’t tell you how many times he’s helped me at the restaurant. And he still works out in the gym; he’s one of those who believes, ‘Move it or lose it.’ He’s a rock star.”

Nothing amps up Joey Morelli more than an intense game of hoops does. He typically battles with, and against, athletes half his age and more than holds his own as a shooting guard who underwent a fourth knee surgery to repair a torn anterior cruciate ligament at the age of 36.

“A basketball court is my happy place,” Morelli says.

“Busy breakfast here at the restaurant, and I’m slinging corned beef,” Morelli says. “It’s a summer day, with our patio area busy, too. My workday ends. I play basketball. My team wins.”

He has no idea what each day in July will be like in Cambodia.

But count on the positive-to-the-core Morelli to shoot for slam dunks—and shed a butterfly or two along the way.

For more information about Joey’s Food Fight (847-997-0407) and Hope For the Silent Voices, visit joeysfoodfight.com and hopeforthesilentvoices.org, respectively. To RSVP to the launch event and fundraiser at Max’s Deli on May 24, or to donate, visit the former website.