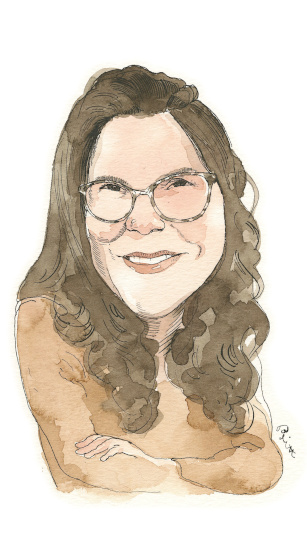 The Kenilworth Cookbook Club has never been just about a cookbook.

So says the founder, Winnetka resident Allison McEntee, 42, who is as frank and as fun-loving as they come.

“Food and drink bring people together,” she says. “They always have. That’s why I started this (in 2018). People love to talk about a dish they found in a cookbook. But we’re mostly about connecting with neighbors and people from other North Shore towns. It’s a ‘gateway’ to making new friends. There’s a thirst for casual conversation in an informal setting.

The Kenilworth Cookbook Club (KCC) is a group of women (323 and counting) that meets once a month in a home. Some are new moms. Others are first-year empty nesters, heads of households, or highly successful professionals—like McEntee, a mother of four and an marketer who has a background in broadcast sales and buying, integrated marketing, digital content, and e-commerce-led initiatives.

“What continues to be consistent—and my favorite part of the KCC—is that no matter where we are in life, where we come from, or what we do, we all come together for one moment, one common interest: to gather, to connect, and to feast … together,” McEntee writes in KCC’s 2019 Community Cookbook, Kenilworth Cooks!

The second annual “Ladies Night” is in the planning stages. McEntee and her husband, Patrick, moved from Chicago to Winnetka in 2018 after Allison, a huge Christmas fan, checked out the Home Alone home on Lincoln Avenue.

“If you know me, you know how much I love Christmas,” an animated McEntee says. “It’s my favorite season. It’s my season. As soon as I saw the Home Alone home, I thought, ‘This village is ideal, beautiful. I then told my husband, ‘This is where we need to raise our kids.’ ”

McEntee and eight of her friends met for the inaugural KCC gathering four years ago, with Ina Garten’s cookbook selected as the night’s inanimate star.

Each month in 2022 is already booked with hosts for KCC get-togethers. KCC’s gathering this month, set for May 19, won’t be held at a home. But that hasn’t tempered McEntee’s enthusiasm in the least. “Home” for the night, beginning at 7 p.m., will be Jen Morrow’s new JenMarie Interiors studio near the event’s partner, Great Coast Commons (414 Green Bay Road), in Kenilworth.

Morrow opened the studio in April.

“Our club is an outlet for moms, allowing them to bond while just being themselves,” McEntee says, adding KCC’s moms hail from all over the North Shore, including Wilmette, Highland Park, Evanston, Glencoe, and Northbrook. “You know what else the club does? It helps women find their crew.”

McEntee grew up as an only child in Marietta, Georgia, and was an accomplished setter for Walton High School’s volleyball team. A self-described nerd who was into science and space camps between volleyball matches, she could have easily continued her athletic career at the college level but instead chose to prioritize academics and “have a life” at Penn State University.

She started as a pre-med major, hoping to one day become an OB/GYN. But chemistry class in her freshman year dashed that goal.

“I knew I was good at talking in front of a large group, so I started thinking about business and communications,” McEntee says. “So many people have a fear of public speaking; I don’t. I consider it an opportunity to connect with people and be creative.”

She met her future husband at a party in New York. He, like Allison, was buying TV ads at the time. They got married on December 27, 2009, two days after Allison’s most joyous day, and lived in Brooklyn Heights.

Allison’s employer then is her employer today: BDG, a leading global media company with a portfolio of distinct digital and experiential brands that shape culture. She has developed successful partnerships with Fortune 500 companies, and she wrote Little Black Book: Asking for Money, a tactical, hands-on “how to” resource targeted to several audiences, from those in business to those in fundraising to those about to ask for a raise.

“Treat this little black book,” she writes in the preface, “as your insider’s guide to asking for what you want, and what you deserve.”

Patrick and Allison moved to Chicago in 2013.

Patrick has moved on from the advertising game and plans to enter the field of education. He’s working on earning a master’s degree at DePaul University and will student-teach social studies at Loyola Academy in Wilmette.

“He’s self-sufficient, and he jumps right in as a father,” McEntee says. “Amazing … he’s amazing.”

Her favorite recipe in that Kenilworth Cooks! Cookbook is “The Best Sloppy Joe Recipe” by Joan Jackson Woods.

“Tastes delicious, and every one in my family loves it,” she says. “You can’t go wrong with a recipe like that.”

“I love making memories, love soaking up every one of them.”

She’s making plenty of them—at home and at the homes of KCC members.