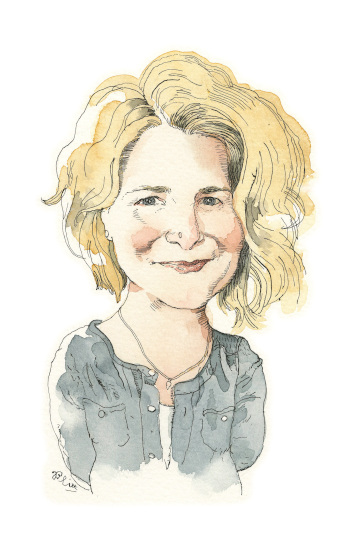 The Fortini-Campbell Company’s clients were large corporations, Hewlett-Packard among them, and Burns—with a master’s degree in integrated marketing communications from Northwestern University—thoroughly enjoyed helping clients understand their consumers’ needs.

“Figuring out what makes consumers tick was an exciting part of my job,” Burns says. “Everything I did, while working there for one of my Northwestern professors, was a delight.”

But another love, her first child, Ryan, made Burns walk away from her cherished senior consultant position.

“I had a heart-to-heart conversation with my husband (David) when Ryan was 4,” Burns, now 50 and a Kildeer resident, recalls. “I wanted to be home with Ryan. He was my No. 1 priority.”

She would later homeschool Ryan and the couple’s other two children, Bradley and Nicholas, who was adopted 10 years ago.

Burns put her marketing acumen to good use again in 2004, when she launched H.E.A.R.T. (Homeschool Enrichment Achieved Respectively Together), a nine-month, weekly enrichment program for students that employs passionate, Christian instructors in the areas of art, science, Spanish, physical education, music, and more.

Based in the Village Church of Barrington, H.E.A.R.T. provides students with all the “extras” that round out the education parents provide at home.

“The homeschool community in Barrington was tiny at the time,” Burns says. “But I felt there was a need for a product that would meet the needs of such a community. So I developed one.

“There I was, in another phase in my life, doing some of the things I did when I was working at Fortini-Campbell.”

In early 2005 Burns’ wheels in her head started to near a Formula One Grand Prix speed. A vision for something bigger for homeschoolers (kindergarten through 12th grade) formed, and in 2006 Classical Consortium Academy (CCA) opened its doors at the Village Church of Barrington and introduced students to creative learning through classical methods and subjects.

Founder Burns serves as head of school and teaches Critical Thinking, Formal Logic, Classical Rhetoric, and Fundamentals in Professionalism. CCA is a classical, Christian hybrid school that combines the expertise and accountability of a rigorous classical school and the flexibility and nurturing of homeschooling.

A total of 180 students have attended CCA at least once a week (some attended on Mondays and Wednesdays) this academic year since August 2021, with several churches and denominations represented in the student body; 212 students, Burns notes, have applied for enrollment in the 2022-2023 academic year.  And Burns plans to open a CCA East campus on the North Shore—at a site to be determined—this fall. CCA’s site (classicalconsortiumacademy.org) points out the irony of the academy’s hallmark—the best way to prepare students for the ever-changing world is by following an ancient philosophy of education. Classical education, it continues, believes that by teaching students the grammar or foundation of all subjects, guiding them how to think about those subjects (like logicians, mathematicians, scientists, artists, and authors) and coaching them on how to articulate themselves well orally and in writing, students will develop the fortitude and tools to handle the complexities of life.

“The overall philosophy of Classical Consortium Academy is that kids are capable, so much more capable, than what the world thinks they can achieve,” Burns says. “Our kids are certainly doing some heavy lifting, intellectually. They have the downtime needed to thoroughly read Dante’s Inferno and The Federalist Papers. Our seventh-graders are reading college-level textbooks, and our juniors in high school are presenting 30-page theses before panels. That level of work, time and time again, produces really good kids.

“I adore,” she states on the academy’s site, “being in the classroom with our amazing CCA students and teaching them how to think logically and critically about the world around them.”

If it sounds as if Burns has found her purpose in life, it’s because she has. Two Bible verses (Galatians 6: 9-10), she says, encapsulate her calling: “And let us not grow weary while doing good, for in due season we shall reap if we do not lose heart. Therefore, as we have opportunity, let us do good to all, especially to those who are of the household of faith.”

Burns grew up in Palatine and Buffalo Grove and, while living in Long Grove, attended Stevenson High School in Lincolnshire. The daughter of John (who adopted Jennifer when she was 14 and now lives in Barrington Hills) and the late Debbie, Jennifer graduated in 1989 from what now is a school with a sprawling campus and an enrollment of nearly 4,300.

“Stevenson had only one building when I went there,” Burns says, adding she was a painfully shy high school student. Debbie was a dynamic matriarch, with a vivacious personality.

“Selfless,” Burns says. “What he did, taking on someone else’s daughter like he did … how wonderful is that?”

Burns shed layers of shyness at the University of Kansas by “blossoming and getting involved in everything,” including the Panhellenic Council, for which she served as vice president.

“UK students who knew me at Stevenson didn’t even recognize me,” says Burns, who started out as a speech pathology major and ended up as an advertising major.

An avid learner since birth, Burns likes to walk and listen to audio books and podcasts in her free time.

She’s also one of the most notable soccer moms in Lake County.

Son Nicholas, a 13-year-old central defensive midfielder, was selected to train under Major League Soccer coaches at FC Cincinnati Academy. That put him on a professional track.

“David and I have grown to love and appreciate soccer, from the team aspect to the sport’s dynamic nature to the players’ ability to think on their feet,” Burns says. “It’s a complex and elegant sport.”

CCA, meanwhile, is a unique and old-school education alternative.

“We’re happy to provide Christian families with an education they want, and we’re more than pleased to have established a place that has a good reputation,” Burns says. “We’re cultivating a love of wisdom and learning in our students.

“This has been such a blessing for me, being able to do this.”