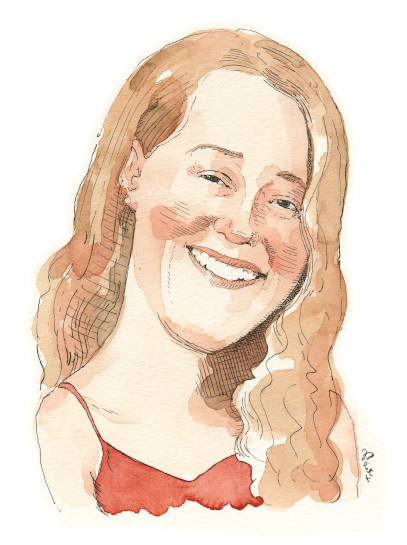 The Wondrous Whirlwind from Winnetka, also known as Jenny Oelerich, has to sit still, finally.

It’s a recent midafternoon at the Community House in Winnetka, where the Winnetka native and 2015 New Trier High School alumna serves as a dance teacher and the Children’s Theatre of Winnetka assistant director of choreography.

Oelerich, 25, also works as a personal trainer and yoga instructor at Sona Fitness in Evanston and performs for the Chicago modern dance company Khecari.

Having to sit in a chair while patiently answering questions about her life and the upcoming Children’s Theatre of Winnetka (CTW) production of Matilda the Musical must feel downright bizarre for someone who typically moves nearly as often as she blinks each day.

But she’s more than a good sport about the 0 mph to-do item on her busy day and powers through the sedentary get-together.

“I started dancing at the age of 2,” Oelerich says as her eyes, triggered by a contagious smile, begin to bop. “I loved dancing, right away. Jazz, musical theater, contemporary, hip-hop, modern, and ballet… learned them all. My favorite was contemporary. The more I danced, the more confident I became in an environment that harbored positivity. One of the things that truly excites me today, as a dance teacher and as a choreographer, is watching a child’s confidence grow during a lesson, or a rehearsal, or a performance.

“So much of the good that comes out of dancing spills over into other aspects of their lives,” she adds. “They’re learning life lessons and teamwork. They’re finding success in the classroom because of dance, and they’ll find more success when they get the opportunities to express themselves in settings like a college interview and a job interview.”

One of the milieus in Matilda the Musical is a school. The CTW cast (fourth-grade through eighth-grade) will perform in six shows from April 28-May 1 at Matz Hall in the Community House in Winnetka. The musical is based on the 1988 children’s novel of the same name by Roald Dahl. Matilda is a 5-year-old girl with the gift of telekinesis who loves to read and faces difficulties caused by her family and school.

“Matilda,” she adds, “helps her classmates and a teacher (Miss Honey). I’m loving how the kids in our ensemble are inserting their personality into the choreography. They’re being creative and increasing their self-esteem at the same time.”

A daughter of Kurt and Gwen Oelerich, Jenny began her career in performing arts in her family’s basement and back yard. Gwen—the stage left manager of Matilda the Musical—runs Oelerich Productions, which produces shows featuring neighborhood children. Performances of The Sound of Music, Beauty and the Beast, Mary Poppins, The Wizard of Oz, and Frozen, among others, have showcased budding stars and delighted local audiences.

“My mom loves the theater,” says Oelerich, adding Gwen made an Amanda Thripp doll that will be used as a prop in Matilda the Musical. Jenny Oelerich took full advantage of what New Trier High School’s Kinesis Dance Company had to offer from the fall of 2011 until the spring of 2015.

“There’s such an amazing performing arts program at New Trier,” says Oelerich, who lives in the Chicago neighborhood Lake View but plans to move to Winnetka next month. “My main dance teachers, Christopher Rutt and Johannah Wininsky, were super inspirational and encouraged me to pursue dance in college and as a career.

In 2019, a year before landing her current position at CTW, Oelerich earned her Bachelor of Fine Arts in dance at the University of Illinois Urbana-Champaign, where she met her fiancé, Sam, who took dance lessons from Jenny on campus. South Side native and huge White Sox fan Sam and huge Cubs fan Jennifer attended a White Sox home game against the Tampa Bay Rays last weekend.

They plan to get married next summer.

In the meantime, Oelerich is also fully engaged in each of her many jobs. She arrives at Sona Fitness before 6 a.m., Monday through Friday, and leaves for the Community House a little after 3 p.m. If the dance artist isn’t teaching a form of dance to a wide range of students (from 2-year-olds to local Fred Astaires and Ginger Rogers) at the 111-year-old center, she’s guiding and inspiring an ensemble of enthusiastic children before the opening of a show.

“A lot of kids out there want to be the lead in a play or a musical,” Oelerich says. “I never performed as a lead in my youth, and I was fine with that because I absolutely loved being a part of an ensemble. I always found it challenging and fun, and I hope the kids I work with now discover that as well.

“There’s value in each performance of an ensemble member,” she adds. “These kids are finding purpose, in addition to meaning. They’re experiencing the benefits of being a part of something bigger than themselves.”

Children’s Theatre of Winnetka’s production of Matilda the Musical opens April 28 at 7 p.m. and continues April 29 at 7:30 p.m.; April 30 at 1 p.m. and 4 p.m.; and May 1 at 1 p.m. and 4 p.m. Performances take place at Matz Hall at the Community House, 620 Lincoln Avenue, Winnetka. Tickets for reserved seats can be purchased at childrenstheatrewinnetka.com for $15 each. For more information, visit childrenstheatrewinnetka.com or call the Community House at 847-446-0537.