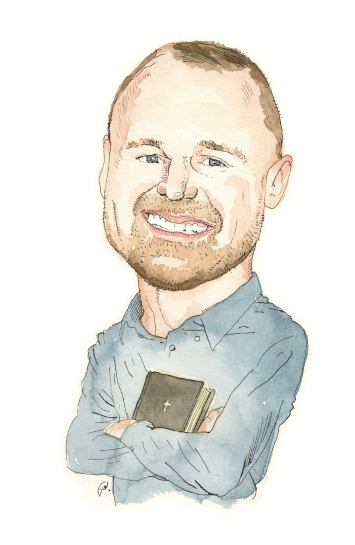 Joe Torgerson was born in Hong Kong, moved to Taiwan at the age of 12, attended colleges in St. Paul, Minnesota, and Deerfield, worked and studied in Missouri, returned to Taiwan to work, and lived in Park Ridge for a spell before moving with his family to their current residence in Libertyville.

Where in the world does the 39-year-old Torgerson work today?

In Northfield, as the middle and upper school principal at Christian Heritage Academy (preschool-12th grade), which has been ranked the No. 1 Christian high school in Illinois by niche.com every year since 2018.

“This feels like home,” a smiling, no-longer-peripatetic Torgerson says a little more than a week before Easter and about three months before taking on the role of head of school at CHA.

“I’m surrounded by faculty and staff members who genuinely care about each other and for our students. Our teachers believe they are disciples of Jesus, and the founding commitment of our academy is to partner with parents and churches in the educational process.”

The mission of CHA—established as an independent school in 1984, with current representation of 55 communities and 145 church congregations—is to offer an exemplary education based on Biblical values to children of Christian families, equipping them to be lifetime followers of Jesus Christ.

What moves Torgerson at this time of the Christian calendar is the meaning of Easter. A son of missionaries Steve (an Evangelical Free Church pastor) and Merrilee, he remembers, as a boy living in Taiwan, waking up early on Easter in a beach town to watch the sunrise with other families.

“I also recall being outside and listening, noticing the beauty of nature around me,” Torgerson says. “I felt … renewed. Renewal is one of Easter’s essential messages. It’s powerful, as is love. Easter is rooted in love—God’s love. It’s a love that is foundational.

“Wrongdoing, interestingly, also has to be a part of any discussion about the meaning of Easter, because it’s what Lent is all about. We are broken.

“The world is broken,” he adds.

“Hope,” he says. “The power of the Resurrection gives hope to all who believe in Jesus. Conquering death means eternal life for His followers, that they would also triumph over death and join Him in Paradise.”

Kim was a volleyball player, while Joe played soccer and majored in history. They got married in 2005 and lived in St. Louis for six years, where Joe (who had earned a master’s degree and teacher certification) taught English at Whitfield School, a private, college preparatory middle school and high school.

“That had been a plan of mine for years, to teach at an international school and work with kids who were experiencing things I had experienced in my youth,” says Torgerson, whose parents retired to Southern Minnesota recently after having lived in East Asia since 1983.

“For a while I was was confused, culturally, all those years ago. My thinking was, I’d be able to teach—a profession I love—and help others overcome the challenges of attending an international school.”

Torgerson, the student, suited up for Morrison Academy’s soccer teams as a cat-quick wing who loved to serve crosses on pitches and amassed way more assists than he did goals. Junior year he also performed as the music man in The Music Man musical, played the clarinet and piano, and sang in the choir.

Torgerson, the adult, and his family returned stateside after eight years in Taiwan. Joe, thinking he might pursue a vocation as a pastor, took PhD courses at Trinity International University in Deerfield while serving Student Life positions. He later chose not to attain a PhD. He then answered the call to become the middle and upper school principal at Christian Heritage Academy in 2021.

“Pre-pandemic, a robust parent culture existed here and contributed greatly to CHA’s firm foundation,” Torgerson says. “But, that said, these last two years or so have been hard on all of us, our students and their families in particular.

“We intend to rebuild that parent culture, and I look forward to further developing the holistic student experience at Christian Heritage Academy—prioritizing not only what students know but helping them understand who they are in Jesus and how they can grow in mission and service to the world.”

A week before Spring Break in late March, most of CHA’s students left the 15-acre campus to either grow as leaders or enrich the lives of others as leaders. Middle school students helped various local philanthropic organizations; freshmen and sophomores attended a leadership retreat; and juniors and seniors travel to Nashville, Tennessee, to participate in a service project.

“Knowing, being, doing … all three are vitals parts of our holistic student experience,” Torgerson says. “We’ve been excellent in knowing and being. As head of school (effective July 1), I want to see more doing.

“As a school we need to look outward, not just inward.”