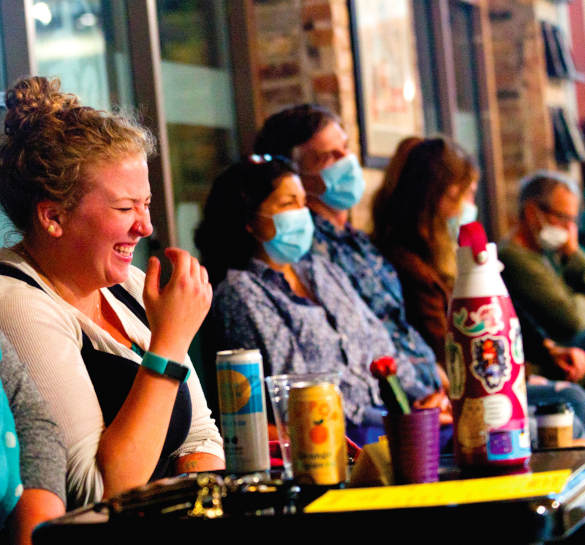 In 2014, Highland Park resident and professional comedian Larry Bloom noticed there weren’t enough laughs on the North Shore. With the closing of the closest comedy club in Vernon Hills, Bloom saw an opportunity to bring professional comedians to the area. He launched Funnier By The Lake to showcase national talent and help laughter seekers avoid a trip to the city for a funny night out.

“I started doing stand-up professionally about 10 years ago and before that I was doing a lot of public speaking,” Bloom says. “Back then, there were no venues for comedy on the North Shore, so I started producing shows locally then kind of adding venues along the way.”

With 10 years of successful experience under his belt, Bloom hosts some long-standing, ongoing shows and, even during the pandemic, was able to move outdoors to keep up and running. It currently hosts regular shows at Madame Zuzu’s in Highland Park, The Laughing Academy, Spirit Water Distillery in Cary, and “The Comedy Nosh” at Max & Benny’s Restaurant and Deli in Northbrook. He also puts on private and corporate shows. 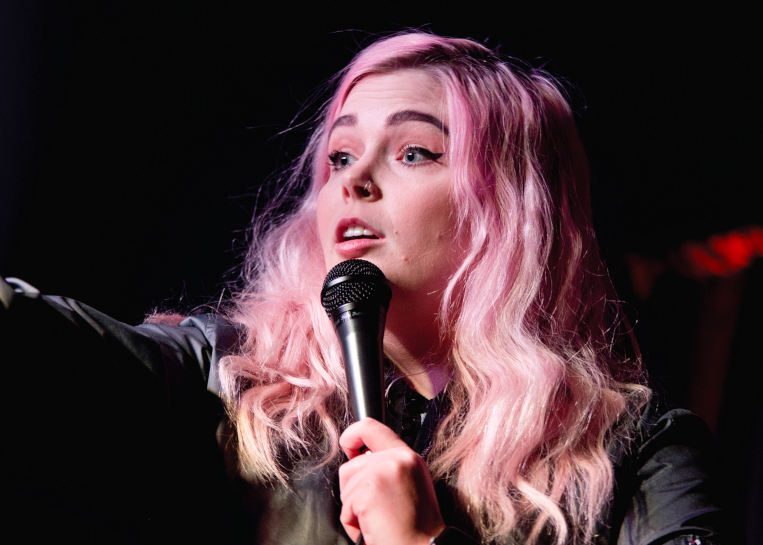 Sarah Perry gets laughs at The Laughing Academy in Glenview.

“I’m a comedian so I get back to the city a lot and around the region but for people who want to go see comedy who are in the north suburbs what I really wanted to do is bring that classic Chicago comedy club with a lineup with real professional comedians who you might see at Zanies or Laugh Factory to the North Shore,” he says

Bloom says he wanted to provide an experience where people could have a night out listening to quality comedy without the hassle of having to go into the city.

“One can enjoy the show without everything involved in going to the city, which takes a lot of planning. You’ve got to drive down there, and you’ve got to park, and then it’s like, ‘Oh well, if we’re going to the city, we should invite these people and we might as well go out to dinner’, and it just turns into this whole thing,” Bloom says. “I just wanted people to be able to go enjoy an eight o’clock show and be home by 10.” 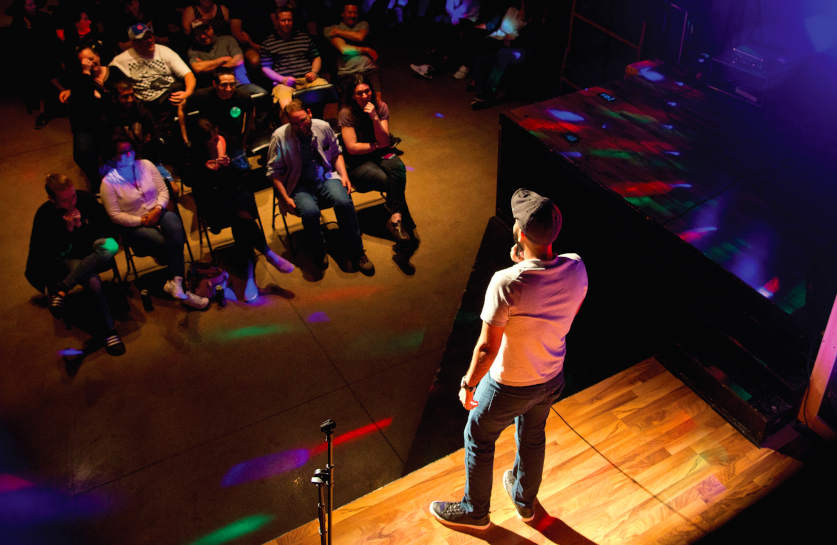 Sharup Karim performs at The Other Side in Crystal Lake.

Bloom emphasizes the importance of booking professional comedians who have proven track records of providing high quality entertainment at his and other venues. Presenting a diverse group of performers is also a goal.

“It’s an ongoing issue with comedy, not just in Chicago but everywhere, If you look at the lineups of my shows, my goal is always to make it extremely inclusive and diverse, not just white guy comics,” he says. “Not that I have anything against white guy comics, but what actually sets Funnier By The Lake apart is we book people of all different races and cultures and genders.”

Bloom says there’s been a standard practice at some venues to hold one spot for a “female comedian”—a term female comedians dislike—but he doesn’t operate that way. 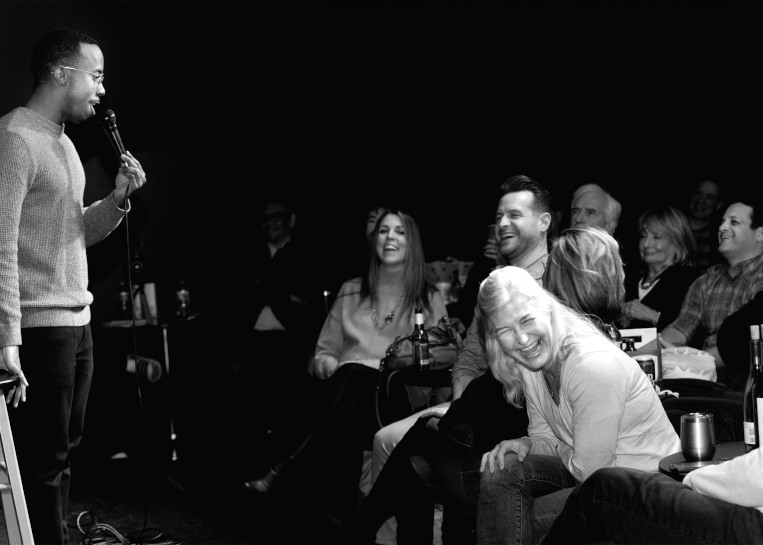 Mike Atcherson entertains the crowd at The Laughing Academy in Glenview.

“They know that if they reach out to get booked, assuming they’re funny and their clip is good, they’ll get booked. It’s not like we have to squeeze them in,” he says. “I’ve never found that we’ve had a shortage of really funny, talented women to book on our shows. I’d say we’re making an effort but to me it’s not that much of an effort because there’s just a ton of great talent out there.” 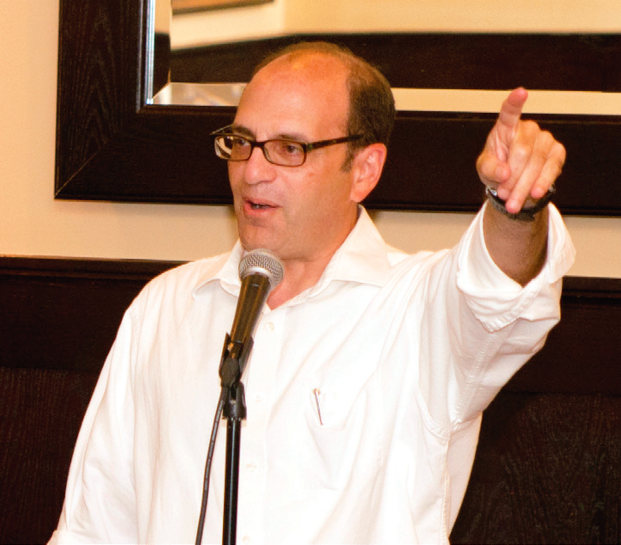 Larry Bloom does his stand-up act at Maggiano’s in Vernon Hills.

Success hasn’t come without its serendipitous moments. Years ago, Bloom reached out to staff at the old Madame Zuzu’s in Highland Park, the tea shop owned by Smashing Pumpkins front man Billy Corgan, to inquire about hosting shows there. It wasn’t until he ran into Corgan at a music show there and explained to him what he was wanting to do that the relationship kickstarted. His relationship with the new Zuzu’s continues to this day.

One thing Bloom has learned during his near 10-year run with Funnier By The Lake is that people on the North Shore have a sense of humor. Finding an audience for the acts he books for his shows has not been a challenge. 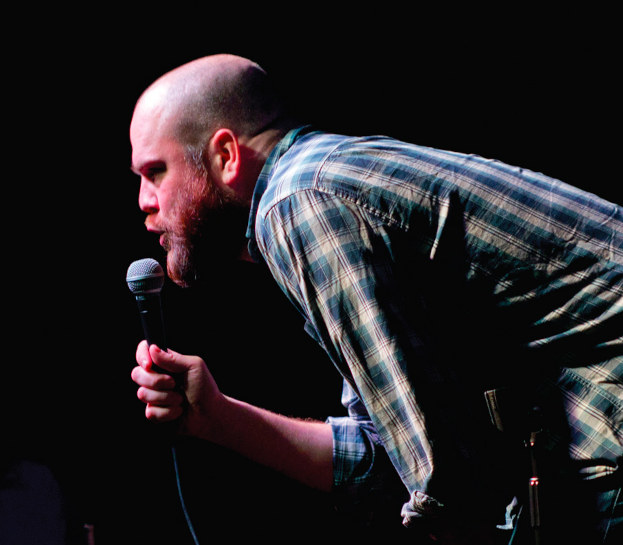 Kevin Kellam leans in for a joke at The Laughing Academy in Glenview.

“I think every show we’ve done, even the outdoor shows during the pandemic, we’ve sold every one of those out. The Zuzu’s shows I think we started back up about a year ago in 2021 and I think every show has sold out,” Bloom says. “There’s a huge, huge appetite, I notice other venues and restaurants doing comedy nights and I’m just going to accept that. What is it they say? Copying is the greatest form of flattery.”

For more information and tickets to shows, visit funnierbythelake.com.