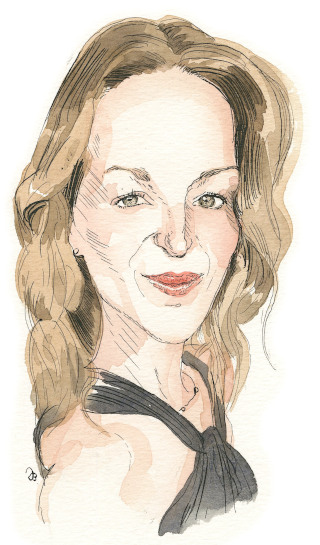 When Karen Firsel was an associate producer of The Oprah Winfrey Show in 2004, she came up with an idea that she hoped would punctuate the latter part of the show’s “Great Car Giveaway.”

You remember the episode. Winfrey gifted Pontiac G-6s to 11 audience members and then informed the rest that one more would get to leave the set with a new set of wheels. Show staffers distributed small boxes, each adorned with a red ribbon, to more than 270 audience members.

“Inside one of these boxes is a key,” Winfrey told them. “If your box has a key, you will be the last person today to get one of those cute G-6s.”

Everybody got a car that day.

The box idea was Firsel’s.

“I remember thinking, ‘If my idea didn’t work, I’d get fired,’” says Northbrook’s Firsel, now 46 years old, a mother of two (Emma, 14, and Eli, 11), and a TV personality and lifestyle expert who creates segments for WGN’s Daytime Chicago, NBC Chicago’s Tech Trends, and Canada-based Breakfast Television, among other shows.

Her idea worked sensationally 18 years ago. Bedlam, the good kind, ensued, as new car owners popped out of their seats, danced, and unleashed piercing, happy screams.

Winfrey’s Harpo Productions kept Firsel, who had started working for the show in 2003, on its payroll.

But she shifted gears to embark on a new career path about a year after the memorable auto show.

“I needed my life back—that’s exactly what I told my husband (Adam),” Firsel recalls. “So, I left The Oprah Winfrey Show. Friends of mine wondered, ‘Why would you do that?’ It was time.

What a ride it was for the Buffalo Grove native and go-getter-since-birth—the daughter of David, a lawyer, and Maureen, a teacher. Firsel truly loved being a Stevenson High School student (Class of 1993) in Lincolnshire every day and played goalkeeper for the Patriots’ varsity soccer team for several seasons. Early in her senior year she declared, “I want to be the next Katie Couric,” to her guidance counselor.

Had the counselor had reins that day, she would have used them gently on Firsel while blaring, “Whoa!” The advice Firsel received was to temper her ambition.

“My guidance counselor was great, and I liked her, but I wanted to prove her wrong,” Firsel says.

Firsel majored in broadcast journalism at the University of Illinois in Champaign and, in the summer before her junior year, worked as an intern at ABC’s World News Tonight with Peter Jennings in New York. Sorority sister Robyn Kaplan introduced Firsel to her father, Rick Kaplan, who was serving as the executive producer of the newscast.

“I made sure to let my guidance counselor know about that opportunity,” a smiling Firsel says. “I remember calling my parents up and telling them, ‘Guess what? I’m going to New York for the summer.’ I did research. I observed. The employees loved to eat pretzels and drink orange juice before the newscast each day.

“It was there,” she adds, “where I fell in love with behind-the-scenes work.”

The next summer found her answering the phones in New York as an intern for Executive Producer Rob Burnett of CBS’s Late Show with David Letterman. A security guard dubbed Firsel “Chicago.” A William Murray called often to speak with Burnett.

“I finally met William Murray in person one day,” Firsel says. “It was (actor/comedian and Wilmette native) Bill Murray.”

Firsel returned to New York after graduating from college and dropped off her resume “everywhere, even on tables in coffee shops, hoping someone would pick one up and contact me.”

The syndicated newsmagazine Inside Edition hired Firsel as a story coordinator in the mid-1990s, when she made $500 a week.

“I had to learn how to build stories,” Firsel says, adding she covered the Clinton-Lewinsky saga and the Columbine High School massacre, among other stories. “I had to pound the pavement and make a ton of phone calls. No Google back then. No email.”

Next up was a 1999-2001 stint as an associate producer for MSNBC News. Her first day was an eventful one, to say the least. John F. Kennedy Jr., his wife, Carolyn, and her sister, Lauren, died in a plane crash. Firsel also produced documentaries for the cable channel.

“After Harpo Productions called and arranged to fly me to Chicago for an interview, I wanted to come up with a presentation that would differentiate me from the other candidates,” says Firsel, who worked with Connie Chung and Anderson Cooper at CNN from 2001-2003. “So, I shared the documentaries that I’d produced.

“I wanted to showcase my storytelling abilities. Storytelling—writing, actually—has always been my core. Keys to effective storytelling are authenticity, relevancy, and timeliness; I certainly keep those in mind as I put together my local segments and my segments for shows in Canada (Firsel also creates content for Cityline, a daytime talk show in Canada).”

The other gifted writer in her family is daughter Emma, who penned a cookbook for her Bat Mitzah project. Whenever Firsel reads Emma’s prose, she hears Emma’s voice.

“I want my TV segments to be conversational, like I’m talking to an audience of my friends,” Firsel says. “But, again, the segments have to be real, with an aspect of problem-solving included. It’s also important to me that I leave the decision-making to each viewer.”

The paramount time in the Firsel household is dinnertime. All four eat together, always, often after watching TV news together. They sit at the table. They look at each other. They breathe. They dig in.

“My husband and I are raising children who aren’t entitled,” Firsel says. “We want them to be organized and to show leadership, empathy, sympathy, kindness—executive skills. As parents, to sit down with Emma and Eli for dinner and discuss our days as well as hear all about their days, to converse with them and enjoy their company over a meal … that’s a win every night.”

Visit karenfirsel.com for more information about the TV personality and lifestyle expert. Firsel, 312-909-0355, can be found on Instagram: @KarenFirsel.