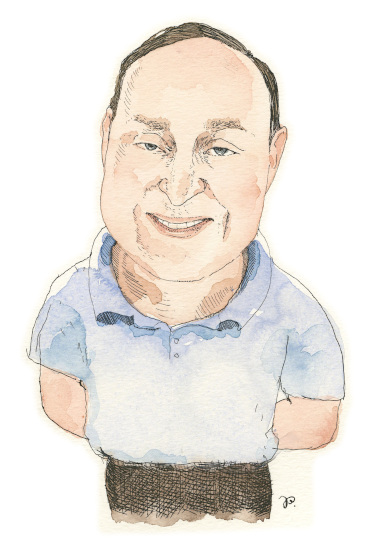 Glen Roberts sits inside a Starbucks in his hometown of Barrington. It’s mid-afternoon. Earlier, in Rosemont, the former AbbVie director of international distribution had practiced with members of his senior softball team.

The 65-year-old will play mostly centerfield this year.

The subject of injuries surfaces.

“It’s a good thing,” the easygoing, engaging Roberts says, “our league has a no-slide rule.”

He could’ve noted that the best way to avoid the temptation to hit the dirt near a base or the plate is to hit nothing but no-doubt-about-it home runs. But Roberts isn’t here to talk about his baseball swing with a scribbler.

He’s here to go to bat for Bravo Waukegan! Roberts started his three-year term as chairman of the board of directors for the Lake Forest-based organization in 2020. Founded 11 years ago by the selfless, delightful Pat Sikorovsky, Bravo Waukegan! began as a grassroots effort to help boost music programs within the 21 schools in the Waukegan School District.

It supports students in the highly diverse and underserved district by partnering with the fine arts administration to find opportunities to grow through music.

Bravo’s snappy tag line: “Empowering children through music, one note at a time.”

“When people hear Bravo’s mission,” Roberts says, “they immediately think, ‘That’s phenomenal.’ I know that was my initial thought. I realized how powerful music can be when I traveled to many countries in my position at AbbVie. It’s true that music is the universal language; it enables you to connect with others, instantly. It’s also inspirational, motivational, soothing.

“It’s nice,” he adds, “to see the development of students, as people, as they prepare to perform on stage. The confidence they gain as musicians, especially after seeing and hearing reactions from audience members, often carries over into the classroom and into their jobs.”

Bravo Waukegan! and The Donna Curry Studio Violin Academy will co-host an in-person fundraising concert, “Sounds: Bravo Bravo Music Festival,” at the Gorton Community Center on April 24, from 3 to 5 p.m. The festival, billed as a “Comeback Concert,” is for families, music lovers, and the community at large.

The afternoon will showcase the talent of 90 students, representing dozens of schools. Waukegan students and Donna Curry’s students will share the stage. A variety of solo and small group performances will be featured, including Waukegan mariachi and small ensembles, ranging from the Beatles to classics.

“When I was young I had bangs because of the Beatles,” Roberts says. “I also really like music by The Who. But my love of music began when I was in middle school and I’d dance to Motown songs in the basement of one of my brother’s friends. The Temptations, the Supremes, early Michael Jackson, the Four Tops … I enjoyed listening to all of them.”

A son of Arnie, a World War II veteran and avid outdoorsman, and Joan, who marched in Chicago with Martin Luther King Jr., Roberts attended Evanston Township High School. A “fairly quiet teen,” he played soccer for a year and wrestled for a year.

Roberts then majored in psychology and minored in sociology at Miami University in Oxford, Ohio, where he also served the Sigma Alpha Epsilon fraternity in many leadership roles.

During his 40-year career in supply chain management, he worked with health care manufacturers Baxter Travenol (now Baxter International Inc.), Abbott, and AbbVie. Roberts met his future wife, Maureen, in New Jersey when Baxter bought out the company for which Maureen worked as a manager.

Maureen nudged Glen to get an MBA, and he earned it—at the age of 36— at Rider University in Lawrence Township, New Jersey.

The couple have two children, 32-year-old Patrick and 29-year-old Caitlin.

Roberts was working for DSC Logistics in Des Plaines when his family moved to Barrington 28 years ago.

In 2017, co-workers at AbbVie suggested Roberts attend an open house for nonprofits at Independence Grove in Libertyville, where he met Bravo Waukegan! Executive Director Karey Walker.

“I was able to check a lot of boxes as we spoke and as I learned about Bravo that day,” recalls Roberts, who retired in 2019. “I love music. Check. As a volunteer for Bravo, I’d get to use some of my strategic planning skills. Check. That certainly interested me. Bravo’s mission impressed me. Check.

“So did Karey’s magnetic personality,” he adds.

Ten days later, Roberts started serving as a Bravo volunteer and later spearheaded a Saturday-morning workshop—focusing on strategic planning for the next three to five years—for the Bravo Waukegan! Board. In 2019, at Onwentsia Club in Lake Forest, he organized the bulk of “Music Connects Us to the World,” a benefit to support Bravo’s music programs.

Bravo Waukegan! impacts 7,000 students each year. Think about the number of those youngsters who’d be adrift without having had the outlet—the haven, in many cases—of learning music and them moving audiences via their performances.

“We want to expand the awareness of Brave Waukegan! beyond Waukegan and Lake Forest,” Roberts says. “We want more involvement from small businesses across the North Shore. We’re helping children turn their lives around. Our enrollment increases ever year.

“I’ve seen the joy of these young musicians when they perform on a stage. I’ve also seen parents as they listen to their children. Those parents’ faces, all of them … beaming with pride.”

Bravo Waukegan’s office is located at the Gorton Community Center, 400 East Illinois Road, in Lake Forest. For more information, call 847-722-5821 or visit bravowaukegan.org. Tickets for the Bravo Bravo Music Festival (April 24, 3-5 p.m.)— “A Comeback Concert”—are $10 and will be sold at the door or through Gorton’s event website, gortoncenter.org.