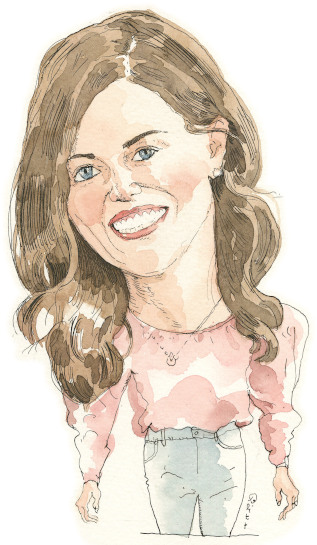 Three-year-old Chloe Stolman asked the question in the presence of her siblings, 9-year-old Ari and 6-year-old Brooke.

The older children each jumped at the chance to provide the answer.

“Uncle Ira does talk—with his eyes,” one said.

“And with his smile and his hugs,” the other chimed.

Hearing the wonderful exchange that day was the children’s mother, Deerfield resident and Shirley Ryan AbilityLab speech pathologist Shelley Stolman, whose brother, Ira, is nonverbal and has severe intellectual disabilities and a seizure disorder.

“To hear Ari and Brooke talk like that and enlighten my youngest made me smile and brought me so much pride,” Shelley, 39, recalls the day after she and her husband, Salesforce Regional VP for New Business Sales Ken Stolman, co-chaired Keshet’s biggest fundraiser of the year—the “Voices of Champions” virtual event—on March 9.

Keshet (Hebrew for “rainbow”) turned 40 this year. The internationally known nonprofit serves children and adults with disabilities and creates a community of belonging where people of all abilities learn, play, work, live, and grow together. It serves a combined 600 participants in Chicago and the city’s suburbs.

Keshet believes children and adults with disabilities deserve to be part of the wide community in ways that they choose to be involved. Keshet provides the support for people to access opportunities to live full and meaningful lives in their home communities.

Ira, 34, has been embraced by Keshet since he was 4 years old.

“My parents (dentist Michael and former grade-school teacher Renee) were at such a loss at what to do for Ira, who had not been successful in school or at camps,” says Shelley Stolman, who grew up in Buffalo Grove and attended Stevenson High School in Lincolnshire, where she served as Student Council President in 2000-2001. “They felt stress. There was a cloud over my family (including Shelley’s younger sister, Karen, now a lawyer) for several years.

“Then my parents found Keshet,” she continues. “It provided relief, immediately. Angst and worries disappeared. It transformed our family, giving us hope and confidence. Ira attended a Keshet camp first and was paired with an inclusion facilitator; he later enrolled in Keshet’s school programs.”

For 30 years, and counting, Stolman and her family have appreciated Keshet’s commitment to inclusion. At Keshet, inclusion is a mindset, not a program, that shapes values, culture, and decisions.

Shelley Stolman became the first sibling of a Keshet participant to spearhead the funder, which, for the second year in a row, raised more then $800,000 to sustain and expand Keshet’s educational, recreational, adult, and residential programs. More than 30 percent of this year’s 800-plus donors were first-time Keshet contributors.

And they weren’t just local givers.

Stolman heard from folks living in New Jersey and Oregon.

“People from all over the country were touched by Keshet’s programs,” she says. “I love highlighting the magic of Keshet.” NBC5 reporter Jen DeSalvo emceed the “Voices of Champions” event. Special vocal guests included the Keshet Choir performing alongside the Chicago Children’s Choir, Broadway’s Miguel Cervantes (Hamilton), America’s Got Talent’s Jacob Valezquez, and the Ravinia Ramblers.

“We celebrated 40 years of champions. But we also recognized what I think is the most amazing thing about Keshet—the positive impact it continues to have on the community as a whole, in addition to the variety of ways it lifts the participants’ spirits and puts them on the path to a sense of belonging.”

Stolman was 12 when she first volunteered as a Sunday School teacher for Keshet. Sister Karen volunteered, too. The pair also helped out at Keshet summer camps, at Buddy Baseball games, and at Special Olympics.

“Our parents,” Stolman says, “never pressured us to sign up to volunteer. I have to give them credit for setting such a positive tone for our family and maintaining it. Keshet has been such an invaluable part of our family for three decades now. A lot of parents who have children with disabilities worry about what’s going to happen to them after they turn 21. They wonder, ‘Then what?’

“Not at Keshet,” she adds. “When you’re a parent of a Keshet participant, you find comfort in knowing how helpful its Adult Day and other adult programs are.”

Stolman—whose mother-in-law, Maureen, was her fourth-grade teacher—majored in speech and hearing science at the University of Illinois in Champaign and earned her master’s degree in speech and pathology at Rush University in Chicago.

Everything about motherhood heartens Stolman, especially when her children interact with Ira. Uncle Ira savors McDonald’s and pizza and time with Ari and Brooke and Chloe. When he makes a buzz sound, he’s announcing his happiness.

Yet another way Ira communicates without talking.

“Ira,” Stolman says, “is affectionate and sweet. He’ll walk up to you and put his arm around you. And I love it when my youngest walks with Ira, or when one of my kids feeds him snacks.

“Knowing the meaning of inclusion, at their ages—that’s such a precious gift.”