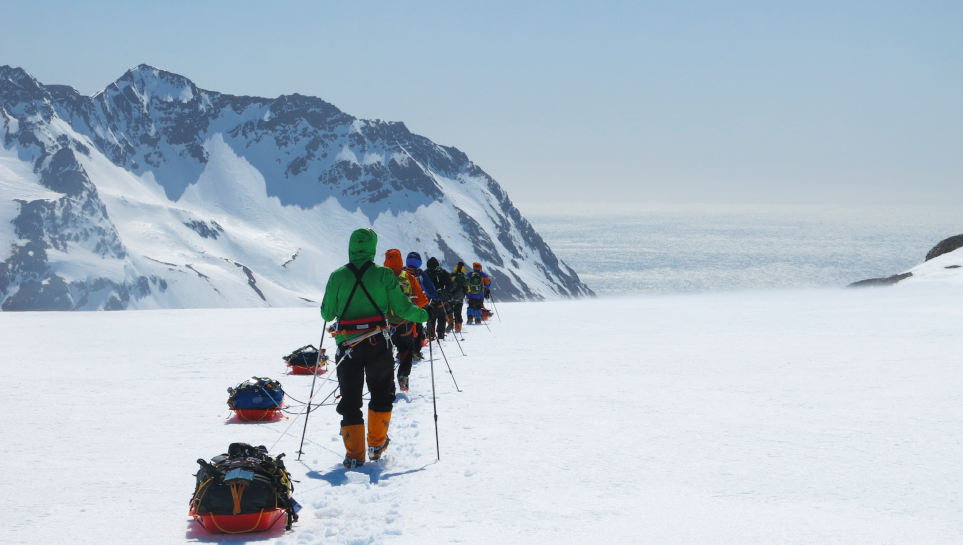 PolarExplorers adventurers ski across the Fortuna Glacier, South Georgia Island (near Antarctica), in 2015. PHOTOGRAPHY PROVIDED BY ANNIE AGGENS OF POLAREXPLORERS

A young Annie Aggens probably had a hard time falling asleep whenever her father, former geology teacher Lorenz, read aloud from a certain book at bedtime.

But not because the Wilmette native and former North Shore Country Day School student was frightened under the covers.

Annie was wide-eyed and enthralled while learning all about the exploits of an early 20th century Anglo-Irish hero and a harrowing adventure from the pages of author Alfred Lansing’s Endurance: Shackleton’s Incredible Voyage. 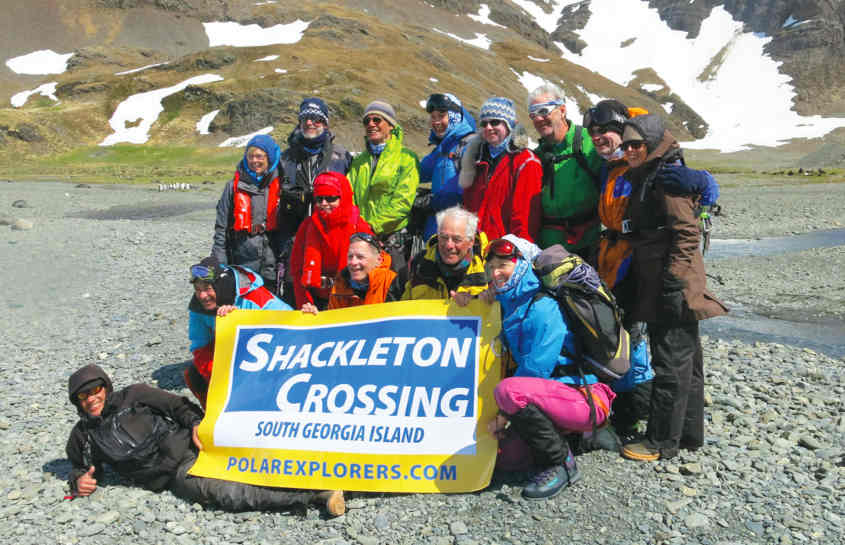 Team members from Wilmette-based PolarExplorers celebrate after completing the Shackleton Crossing of South Georgia Island in 2015. PHOTOGRAPHY PROVIDED BY ANNIE AGGENS OF POLAREXPLORERS

Her two sisters found themselves captivated, too, as Lorenz sat on the northernmost step of a stairwell and shone a flashlight on Lansing’s moving prose.

Sir Ernest Shackleton led the ill-fated Imperial Trans-Antarctic Expedition that saw the sinking of the ship Endurance in the Weddell Sea in 1915 but ended—astonishingly—with Shackleton rescuing his entire crew.

The expedition leader and his 27 men somehow survived months on ice and a diet of fresh water, albatross eggs, seals, and penguins.

“When you mention the ship Endurance to adventurers around the world, they get goosebumps,” says Aggens, now director of Wilmette-based PolarExplorers, which was founded in 1993 and creates exceptional and unique adventures for the intrepid traveler and explores the ends of the earth (“and all the cold places in between”).

“And Shackleton,” Aggens continues, “was a phenomenal, charismatic leader.”

Adds PolarExplorers Founder Rich Sweitzer, also of Wilmette: “They called Shackleton ‘The Boss,’ and his motto was, ‘By endurance we conquer.’”

Aggens and Sweitzer had 107 reasons to celebrate wildly on March 9.

That’s when Endurance was discovered resting upright some two miles below the surface of the Weddell Sea, near Antarctica, and nearly 107 years after sea ice had consumed the wooden vessel, prompting Shackleton, surrounded by his disheartened crew, to declare, “She’s gone.”

In 2015 Aggens and Sweitzer and several other Chicago-area adventurers traveled to South Georgia Island, where Shackleton, with four of his 27 crew members, traversed—after navigating about 800 miles on a narrow lifeboat—during his legendary rescue odyssey that featured help from Chile and a return to ice-covered Elephant Island off the coast of Antarctica.

“So exciting,” Aggens says. “Our team got to walk in Shackleton’s footsteps and experience the glaciers and mountain descents that he did. Shackleton is a hero to many of us.

Another Wilmette connection to Endurance was the author Lansing, who attended Northwestern University’s Medill School of Journalism (but did not complete the program) and worked for a Wilmette newspaper before the 1959 publication of Endurance: Shackleton’s Incredible Voyage.

Aggens, passionate to the bone about polar expeditions, might know more about Shackleton than any of his Endurance mates did. She also could teach a riveting course on the Imperial Trans-Antarctic Expedition that began in August 1914 and ended nearly two years later.

“Shackleton,” Aggens informs, “had been urged by South Georgia Island whalers not to sail because the sea ice was too heavy. He didn’t take their advice, because he was determined to guide an expedition that left England and traveled to Buenos Aires before heading toward Antarctica. Endurance had two masts, and it was a gorgeous ship.

“Endurance,” she adds, “is perhaps the most iconic ship in the history of exploration. It has come to symbolize hope, courage, fortitude, and resilience—all qualities embraced by Sir Ernest Shackleton and his crew.”

What they had to endure more than a century ago still stuns former Peace Corps volunteer Sweitzer, who, as a student at Howard Junior High School in Wilmette, learned the Winter Olympics sport of curling in a gym class before enrolling at New Trier East High School in Winnetka.

“Once Endurance sank near Antarctica, the 28 men were completely on their own,” Sweitzer says. “How they survived months on the ice, an 800-mile lifeboat journey, and finally a ‘Hail Mary’ crossing of an unmapped, glacier-covered island, all to get help … it’s beyond comprehension.”

Shackleton led a total of three British expeditions to the Antarctic. He died of a suspected heart attack in 1922, at the age of 47, at the beginning of a voyage.

“Of course, our expedition (in 2015) could never recreate Shackleton’s,” Aggens writes in There Are Strange Things Done in the Midnight Sun: A Collection of Stories Celebrating PolarExplorers’ 25th Anniversary. “He made the crossing in 33 hours in the last-ditch effort to save the lives of 27 men. We took four days.

“We talked about Shackleton’s grave (on South Georgia Island) and how perfect it is that Frank Wild (Shackleton’s right-hand man) is buried only a few feet away. And we shook our heads in amazement at Shackleton’s luck—a full moon, no wind, good visibility, no crevasses, and the audible sound of a steam whistle. Then we became quiet with personal reflection. Silence has a way of sharing feelings not so easily conveyed by words.”

Aggens and a team of fellow adventurers will head back to South Georgia Island for an expedition starting on October 18. It’ll last until November 7.

“Annie,” Sweitzer says, “is the heart and soul of PolarExplorers. No one would deny that.”

The bigger picture that accompanied the big news about Endurance on March 9.

“The announcement that the Endurance was discovered after 107 years reminds us that adventure is a critical part of the human experience,” Aggens says. “And just like Shackleton, many people today know that adventure can lead to a deeper and richer life.”

PolarExplorers is located at 1130 Greenleaf Avenue in Wilmette. It organized the first-ever North Pole Dogsled Expedition. PolarExplorers’ sister company is The Northwest Passage, also in Wilmette. Call 847-256-4409 or visit polarexplorers.com for more information.