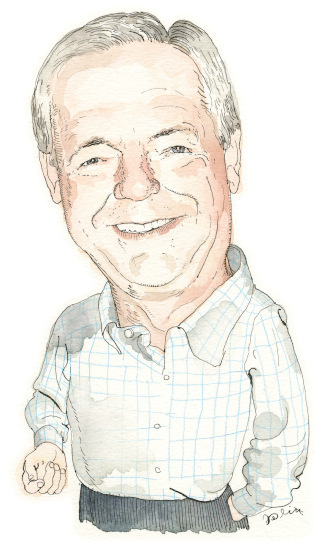 Did you hear the one about the Civil War veteran from Wilmette who headed to work one day, lunch pail in hand, and went missing for more than 20 years?

John Jacoby did, and he’s about to flesh out the true story for an audience of one at a Starbucks near Loyola Academy in Wilmette.

“Frank Alles,” the former Village of Wilmette President begins, “had a bunch of kids, all young, when he disappeared. Months went by, then years, then decades. His family thought he might be in California. A child of his traveled to California and found Frank working in an orange grove. He then brought his father home.

Jacoby, 80 years old and a Wilmette resident since 1974, has a ravenous appetite for such stories and for all things Wilmette. For 10 years he wrote columns—“ strange stories, amazing stories, and human interest stories, all about Wilmette,” he notes—for the Wilmette Beacon, which folded right before Jacoby’s completed 500th column would have been published.

He also penned a book, Wilmette at 150 (Amika Press, 403 pages), in 2021, a year ahead of the village’s Sesquicentennial Celebration and a year after he was named one of four former village presidents to co-chair the 14-member committee overseeing the yearlong celebration.

Jacoby’s book is a collection of illuminating stories that feature and celebrate the people, places, and events that have shaped the village named in honor of Archange and Antoine Ouilmette.

“I love the community’s history and what distinguishes Wilmette from other North Shore communities,” Jacoby, a retired labor lawyer, says. “I’ve always been interested in the character of the village—and the village’s characters. Researching Wilmette history still interests me. (Bank robber) Baby Face Nelson has a connection to Wilmette: He was on the FBI’s most wanted list when he sought refuge in Wilmette, where he was killed.

“His body,” Jacoby adds, “was dumped, conveniently, at a cemetery.”

Look for Wilmette, incorporated on September 19, 1872, to come alive like never before on September 10, 2022, when Wilmette’s 150th birthday party will be staged at and near the Village Center (1101 Lake Avenue). That community festival will cap a year-long fete that began with a speaker series (Jacoby served as one of the orators in January), followed by a winter carnival.

Other observances in 2022 will include art shows and projects to enhance public spaces in the community, along with 150th anniversary-themed events sponsored by the Wilmette Park District, the Wilmette Public Library, local school districts, the Chamber of Commerce, the Wilmette Historical Museum, and Wilmette’s pair or Rotary Clubs, among other civic groups.

“All of it will give the community a shot in the arm,” Jacoby says. “Our purpose, as a committee, is to engage and unify people through events, and to buttress a sense of community that exists in Wilmette and strive to expand it along the way. When I think of Wilmette, I think of the wonderful schools, the educated folks and intelligent conversations, the beautiful lakefront, the excellent facilities. People in our close-knit neighborhoods are nice, genuinely nice.

“And extremely kind people,” he adds, “have a way of generating more kindness.”

Jacoby, who grew up in Western Springs, produced copy for the student newspaper at Lyons Township High School in LaGrange before becoming the publication’s editor in his senior year. The promotion forced Jacoby to delete his plan to become a second-year cross country runner for the Lions.

“I had a very good journalism teacher (Katherine Keefe) in high school,” Jacoby says. “She loved her job. She was very patient but had high standards. Journalism prepared me well for the writing I did as a lawyer (at the Chicago firm now known as Vedder Price, PC). I had to present the facts coherently in my post-hearing briefs. My philosophy was to write a brief as a speaker would tell a coherent story.”

Jacoby’s father, Arthur, died at the age of 38, leaving his wife, Ruth, to raise John and his older sister on a junior high school teacher’s salary. John was 7 when his father departed.

John Jacoby completed his undergraduate and law school degrees in a combined six years at the University of Illinois in Champaign.

John and his wife, Muggsy, lived in Hinsdale before moving to Wilmette 48 years ago. Muggsy grew up in tiny Ladd, a village in Bureau County, Illinois. The couple raised Suzy, Sarah, Matt, and Mazy, all of whom played tennis at New Trier High School.

Suzy was a two-time state runner-up in doubles for the Trevians.

The four netters had an in-house tennis instructor in their left-handed father, a steady, tireless baseliner who had founded the Wilmette Men’s Tennis Association. Jacoby spent countless hours on the courts—mainly those at Thornwood Park in Wilmette— with his children, conducting a variety of drills.

Jacoby stressed control more than anything else to his charges.

“I wanted them to develop consistency,” recalls Jacoby, the grandfather of 13, including New Trier twins and George Washington University lacrosse recruits Emma and Grace Curry. “My challenge to them was, ‘OK, how many groundstrokes in a row can you keep in play?’ We did a lot of counting.”

The clock Jacoby received after serving his two terms (1989-1997) as Village of Wilmette president. Among the projects he supervised during his tenure was the creation of the Wilmette Veterans Memorial, which recognizes the 110 Wilmette men and women who perished while serving the U.S. military.

“I plugged it, got the ball rolling,” Jacoby says. “We formed a committee and found a designer, Martin Wolf. Martin did it for free.” Similar altruism spurs Jacoby and his fellow Sesquicentennial Celebration Committee co-chairs—Christopher Canning, Nancy Canafax, and Vern Squires—in 2022.

“Wilmette residents are proud of a lot of their village’s characteristics,” Jacoby says. “Those distinctions deserve to be celebrated. Unfortunately, there have been recent diversions and distractions and realities, such as social media and COVID, that have divided communities.

“This year, Wilmette’s 150th, is an opportunity to honor our special village and bring people together at the same time.”

For more information about the Sesquicentennial Celebration for Wilmette events, visit wilmette150.org.