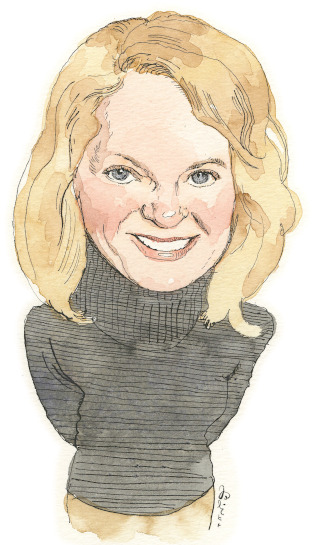 Garrison Keillor got lost in Lake Forest in February 2020.

The author, singer, humorist, radio personality, and engaging storyteller couldn’t find his way—on foot—from the Deer Path Inn to the Gorton Community Center, where he was scheduled to entertain a sold-out John & Nancy Hughes Theater.

The distance separating the two locations?

Two-tenths of a mile.

Mr. Keillor parked his 6-foot-4 frame in front of the Walgreens on Deerpath and then called Gorton.

Gorton Community Center Director of Events Ann Wildman hopped into her car to rescue the creator of the radio show A Prairie Home Companion—and to save the day.

“You should have seen him when I arrived at Walgreens,” Wildman says, flashing a smile as she recalls the details of an unforgettable scene. “Garrison was standing alone on a sidewalk, with his head covered by a blanket of snow. And he was singing… singing opera. Quite an eccentric man.

“He got into my car, and we made it to Gorton on time.”

Wildman, 52, has been steering all kinds of Gorton events—after securing them—since 2016, when GCC hosted maybe nine main bookings. This year? Four to five main events each month, at a gathering place that strives to educate, entertain, and inspire, as well as bring a touch of the city experience to Lake Forest.

“We’re bringing in musicians and bands that you’d usually find at City Winery in Chicago and similar venues,” says Wildman, a mother of two (Jack, 22, and Kate, 19, with husband Mark) and a Lake Bluff resident since 2005. “We like to make it easy and convenient for members of the Lake Forest and Lake Bluff communities to experience such entertainment in their back yard.

“The variety of talent we get to perform in our Gorton Center Live series is something I’m proud of. But there’s no way I’d be able to pull any of this off without the help of our collaborative staff or without the trusting, hands-off leadership of (GCC Executive Director) Amy Wagliardo, who knows how important a range of programming is to the vitality of a community center. I’ve never been around a more supportive, positive group of colleagues than this one.”

The second oldest of Bill and Mary Ann Bray’s four children, Ann grew up in downstate Alton and, as a sixth grader, trained a horse named Golden Boy for a 4-H project. She and the equine won Best Novice honors at a horse show. Wildman cheered and played four years of varsity tennis at Marquette High School, before hitting the books at Marquette University in Milwaukee, majoring in journalism and minoring in public relations.

“He was well-liked, incredibly kind, and helpful to others,” Wildman says. “My father had a good heart.”

When Wildman was a recruiter for the career placement firm Richard-Michael Group in Chicago, she met her future husband on a blind date in Evanston. Ann and Mark, a Minnesotan (like Keillor), dined at Dave’s Italian Kitchen and then headed to an ice arena, where Mark and fellow Northwestern Kellogg School of Management alumni battled in a hockey game.

Mark, a wing, scored a goal.

Ann entered the field of executive search after three years at Richard-Michael, landing an associate position at A.T. Kearney in Chicago for a year before working for three years—and rising to senior associate—at Heidrick & Struggles in Chicago.

“My time as a recruiter was stressful,” Wildman admits. “Executive-search work wasn’t as cut-throat, and it gave me opportunities to learn and grow. My mentor at Heidrick & Struggles was (the late) Fred Kahn, a managing partner who lived in Winnetka. He loved to teach; I loved to learn. He taught me how to deal with people, how to be diplomatic, and how to remain calm and work effectively under pressure.

“Fred,” she adds, “was such a classy, upstanding man.”

In 2016 she searched for professional, part-time work in a local setting. Gorton had an open position. The bonus? A couple of Ann’s friends worked at the community center.

“I didn’t want a pressure-cooker, and I wanted a job that would give me joy,” Wildman says. “I was really, really lucky, getting the opportunity to not only work with such a wonderful staff in a beloved place but to also help make it a robust place for a special community.

“I love my job. It’s so different, compared to what I did in my previous career. I get to work to fulfill the mission of an essential nonprofit instead of constantly shooting to hit a certain number or to make a certain amount of money. Gorton’s good purpose energizes me.”

Gorton’s annual Block Party, held in mid-September and dubbed “summer’s last hurrah,” was created by Wildman in 2016. It’s a free event. It features a movie on a 35-foot outdoor screen (and attendant costume contest), live entertainment, fare from local restaurants, and booths set up by Gorton’s nonprofit tenants.

“People gather at the party, bump into a neighbor or two, enjoy entertainment,” Wildman says. “It’s all about family and community. If you’re looking for an example of an event that showcases our department’s collaboration, attend our Block Party.

“It’s also the perfect example,” she adds, “of a mission-based event.”