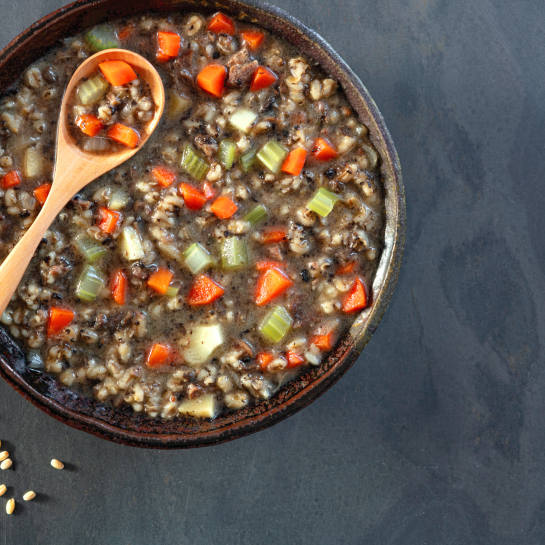 A great soup is three things at once—nourishing, tasty, and easy on the budget. This beefy mushroom barley soup lassos that golden triad. The stock is made in the oven, with meaty beef neck bones. Combined with barley, sweet parsnips, carrot, and onion in the soup, it makes a hearty meal.

FOR THE BEEF STOCK:

FOR THE MUSHROOMS AND BARLEY:

Preheat oven to 400 degrees. Rub each portion of beef with salt and pepper. Sprinkle the chopped onion in the bottom of deep casserole or large Dutch oven. Place beef bones and carrot chunks over onion, drizzle with olive oil and place in the oven for 40 minutes until well browned. Reduce oven heat to 325 degrees. Add parsnip and celery chunks, garlic cloves, peppercorns, and bay leaf to the beef; cover all with water. Roast in the oven until meat is falling off the bones, about three hours. Scrape contents of the casserole into a large colander over a large stock pot, catching the stock in the pot. Simmer the stock over medium low heat. Remove meat from the beef bones, discarding any fat or gristle and cutting meat into small pieces. Discard bones. Cut cooked parsnip, celery, and carrot into small pieces and add to the stock pot. Add meat and cooked diced onion to the stock pot. Cook barley according to package directions.

Note: If you want a looser soup, add less of the cooked barley to the soup pot.