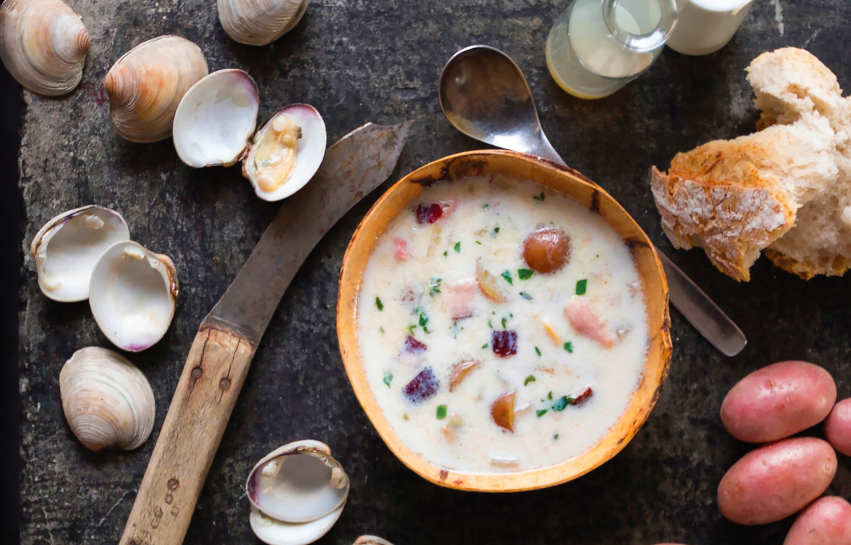 America loved him for his street-smart tough-guy mannerisms and his Academy Award-winning portrayal of George M. Cohan in Yankee Doodle Dandy. But actor James Cagney loved the outdoors and country life, leaving his birthplace of Manhattan for a farm in upstate New York, where he raised horses. Cagney also apparently loved clam chowder. In 1958, he went on the record with this recipe for his version of the soup. In it, he specified that a generous three-dozen raw clams be boiled after shucking. During our testing, this yielded a tasty broth, but some rather chewy clams. We’ve adapted/augmented the recipe to include more clam juice, and to hold off on cooking the clams ’til the very end for a more-tender result. The result is a deliciously flavorful brothy chowder, seasoned with herbs, onion and bacon.

• Tiny red potatoes, cut in half or sliced to make 1 cup

• 1 sprig of fresh thyme, leaves only

SHUCK CLAMS: Fill your sink with ice water. Heat another 6 cups water to boiling in a large pot. Immerse clams in boiling water for a scant 20 seconds. Using a slotted spoon, immediately scoop clams out of the hot water and into to the ice-water bath.

The clams will have opened a bit. Insert a knife into each clam to open the shell. Scrape the clam out of the shell, discarding any impurities. Gather clam meat in a bowl. Set aside. Discard shells.

In a heavy-bottomed soup pot, heat 1 1/2 cups water to boiling. Add potato pieces, reduce heat and simmer until you can pierce the potatoes with a fork. Turn heat off. Leave potatoes and water in pot.

In a medium sized heavy skillet over medium heat, sauté the diced bacon. Remove the bacon, leaving the rendered fat in the pan. Transfer the bacon to the pot of potatoes and water.

Over low heat, cook the diced onion in the fat left in the skillet until onions are soft, but not browned. Transfer the onion to the bacon and potatoes pot. Add herbs, salt, pepper, and clam juice. Heat soup to boiling; immediately reduce heat to a slow simmer. Add milk. Add reserved clams. Simmer for five or six minutes until all are heated through. Adjust seasoning. Garnish with a bit more parsley and a smidgeon of butter. Serve soup with crusty bread and butter.