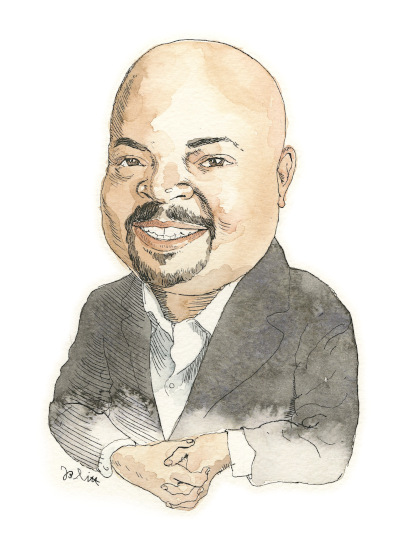 Avid fisherman Eudell Watts IV has quite a tale for you—but it’s a true one.

And it has nothing to do with the length and weight of a largemouth bass.

It’s a story about a former slave from Missouri named Arthur, who became free at 27, served as a paid barbecue pit master at an event attended by 11,000 people in downstate Kewanee, and lived to … 108. That’s right. A century, plus the age of a third grader.

“He also was still working behind a plow horse on his small farm at the age of 107,” says the 54-year-old Watts, who still fishes twice a year with childhood friend Mike Corrigan. “He was a pretty gruff man, no-nonsense, with not much of a sense of humor.

“But ‘Old Arthur’—that’s what they called him—was an absolute legend,” he adds. “He was the foremost pit master in Central Illinois after manning fire pits and creating barbecue sauces and seasonings as a slave. Kewanee back then was considered the hog capital of the world, and Old Arthur and his sauces made the city’s Hog Festival special every year.”

Watts, a resident of Evanston, would have loved to have had the opportunity to meet Old Arthur, who died in 1945.

He’ll have to settle for regaling others with compelling anecdotes in the lengthy life of his great-great-grandfather instead. And—with the help of his business partner/father, Eudell Watts III, and son/right-hand man Eudell V, 21—producing and selling Old Arthur’s Barbecue Sauce products along the North Shore and beyond.

Old Arthur’s heirloom recipes (Kewanee Red BBQ Sauce and Smokestack BBQ Rub, to name a couple) were made commercially available last fall in Mariano’s and other local stores, including Backyard Barbecue in Wilmette, Homestead Meats in Evanston, and Al’s Meat Market in Wilmette.

Eudell Watts III, 82 and living in Rock Island, has been in charge of making sure the shelves of Hy-Vee stores in Western Illinois and eastern Iowa have displayed Old Arthur’s to-die-for flavorings for years.

“It’s a point of pride, sharing the legacy of my great-great-grandfather Arthur and my family’s brand story,” says Eudell IV, who also works in the pharmaceutical division of Johnson & Johnson as a regional business director.

“We found Arthur’s recipes in a beat-up box. Arthur was illiterate and relied on his four children to write down the recipes and protect them from being used by someone outside the family; today we hold fundraisers and earmark money for children’s literacy organizations.”

Old Arthur’s Barbecue Sauce, initially sold online only, won the inaugural “Peapod’s Next Best” Gourmet Food Product contest in 2016. It beat out some 400 other entrants, prompting calls to Watts from restaurateurs and independent grocery owners.

“My wife (Julie) had heard about the contest while watching TV one night,” Watts recalls. “It was fairly late, and once I’m asleep, it’s hard to wake me up. But she managed to do that. The next day I found out the deadline to enter the contest was that day.”

The sauce earned rave reviews from celebrity judges, including American Master Sommelier, restaurateur, and television personality Alpana Singh, who noted, “It’s a story 100 years in the making … [it] needs to be tasted to be believed.”

Watts earned the opportunity to sample judo at a high level after graduating from Alleman Catholic High School in Rock Island. A seven-time Illinois champion judoka, Watts trained with Olympians and Olympic hopefuls in the sport of judo in Colorado Springs.

“I’ve always been competitive,” Watts says. “Judo is physically and mentally demanding. Every match is like a chess match.”

Watts returned to Illinois to study communications, with a focus on business, at the University of Illinois-Chicago. He paid for every cent of tuition, while working two jobs per semester, each year.

“I told my professors, ‘Look, I’m going to miss some of your classes because of my jobs, but I’ll turn in every assignment and show up to take every exam,’” Watts says. “One professor told me, ‘Well, you’ll never get an ‘A’ from me.’ My response to that was, ‘Then I’ll take the ‘B.’”

Watts worked in customer service/inside sales for three years with Inland Steel before starting his tenure at Johnson & Johnson in 1996.

“My years at Inland Steel were grueling ones,” he says. “It was a highly stressful job; it was also a great job. I loved the job’s responsibilities, as well as the accountability. Responsibility and accountability—those are two major components of my personality.”

Eudell and Julie are parents to two other children, 17-year-old Simone and 14-year-old Christian, in addition to Eudell V.

“I’m a big-picture, big-idea guy, and my wife is the voice of reason and someone who’s good at paying attention to details,” Watts says. “Our mission as parents is to raise people better than ourselves. It’s important that they’re all capable of having compassion for others and are aware of how vital it is to give back to the community.”

The major influences in Watts’s life, when he was growing up, were his father and grandfather. Each had an admirable work ethic. Each displayed the kind of character an Admiral would salute.

“I was 8 or 9, when I wanted to buy a radio,” Watts says. “So I asked my grandfather if I could do odd jobs for money around his house. He made a list of things for me to do on a piece of paper, front and back. I remember edging the flowerbeds, but I didn’t clean the shovel afterward. My grandfather then told me a shovel should last the better part of your life and showed me how to wipe it down, how to apply oil to it.

“I remember him taking a cigar out of his mouth and telling me, ‘All you have, at the end of the day, is your name. People will either speak highly of you or laugh at you.’”

For more information about Old Arthur’s products, and to order barbecue sauces and rubs, visit oldarthurs.com or amazon.com.