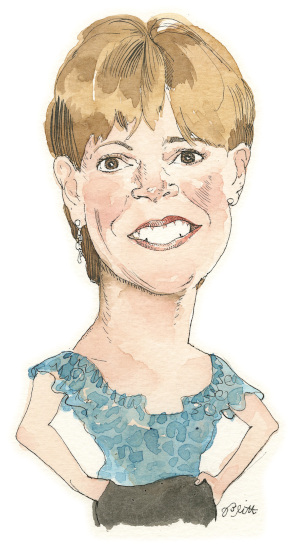 Renee Baldwin sits in a squishy, comfortable couch at Libertyville-based Upscale Rummage, the nonprofit re-sale shop she launched at the Montessori School of Lake Forest in 1999.

The white couch is one of 100,000-plus items for sale in a 10,000-square-foot warehouse. Baldwin, a 61-year-old from Lake Bluff, shifts her frame slightly in order to dangle her legs over an arm of the couch—in the middle of a highly animated recollection of her days as an inspector of shock absorbers at a die-cast Ford shop in Glenview.

“Did that job for one summer in high school,” says a beaming Baldwin. “Sat on a bucket as I worked. During breaks, though, I danced, or did pirouettes. I had to get up and move.”

Baldwin then elevates her legs and churns them, quickly. Moments later, an Upscale Rummage employee and a woman interested in buying an attractive side table approach the white couch and stop three feet from Baldwin.

“How much for this table?” the woman asks.

“How about thirty?” she suggests.

“Sure,” Baldwin says, eliciting a smile from the Upscale Rummage customer.

Baldwin turns her head to face her interviewer, who’s sitting on a white couch across from her.

“Hey, that’s thirty dollars we didn’t have before the table arrived here,” she says.

Upscale Rummage, in a nutshell: priceless. It exists solely to help others. All proceeds from the shop go to local nonprofits in Lake and Cook counties. Through its Sharing Saturdays program, Upscale Rummage supports child and animal welfare groups, music and sports programs, the arts and education, and many organizations that serve adults with disabilities.

It also assists refugee families and people affected by house fires, medical emergencies, job loss, and homelessness, among other hardships.

“We give so much care to donated items, and that’s one of the reasons ‘upscale’ is in our name,” Baldwin says. “We clean toasters and blenders.

One of my super, big-hearted volunteers, Glory Wynsen (of Milwaukee), who’s been with me all 23 years, insists on washing and ironing every piece of children’s clothing.

“We aim to give everyone who sets foot in here a dignified shopping experience.”

Among the other items in the warehouse waiting for a new home are books, accessories, jewelry, artwork, linens, rugs, luggage, lamps, collectables, and sporting goods.

Baldwin’s days as a serial do-gooder began at Glenbrook North High School in Northbrook, if not before. Her visits to nursing home facilities as a volunteer, along with the countless service projects she completed in four years inside the high school, garnered commendations galore. Earned certificates doubled as wallpaper in her room.

Renee was only 18 when her father, Ed, died. Ed was a Realtor who loved hosting garage sales—even if he displayed only two items because, “Garage sales allowed him more opportunities to talk with neighbors,” his daughter says.

Ed’s trips with Renee to the Cubs’ 1:20 p.m. games at Wrigley Field always began at 7 a.m. They would eat breakfast together near the ballpark and be sure to show up in time for batting practice.

“Dad had Tuesdays off, and he taught me how to change the oil, how to change a tire,” Baldwin says. “He taught me a lot of things. I regret not having an adult relationship with him. My mom (the late Lorraine) … everyone absolutely loved her. My parents were great ballroom dancers. I loved to dance, too. I did tap, and I took jazz dance lessons in Evanston.

“I remember constantly entertaining my parents’ guests at our home.”

Baldwin got her telecommunications degree at Indiana University and wanted to be the next Jane Pauley. She became a commercial music producer at Opus III instead, for 10 years, after working for two years as the department head of accessories at Crate & Barrel in Northbrook.

“Best job ever,” Baldwin says of her tenure at Opus III. “There I was, in a recording studio, with the best musicians. We produced ad jingles for McDonald’s, United Airlines, Betty Crocker, State Farm, and others.”

Renee met her future husband, Chris, thanks to Chris’s little sister, Leslie, who set them up on a blind date. They got married in 1988 and raised Brendan, now 28, and Brede, 23. Both sons are graduates of Montessori School of Lake Forest—Upscale Rummage’s birthplace and home for seven years—and accomplished musicians.

“I knew a lot of people who wanted to get rid of nice things,” Baldwin recalls. “I figured, ‘Why not try to find new homes for those things and benefit others at the same time.’ We started holding one rummage sale a year, for a weekend, at Montessori.”

That grew to two weekends a year. Then to four weekends. Proceeds from each sale, between $35,000-$40,000, funded school scholarships.

Upscale Rummage’s home base moved six times since 1995, before settling in Libertyville, at the site of an O’Reilly’s Furniture store, four years ago.

“We’re here to provide items at low cost or no cost to those with needs, to those who are underserved,” Baldwin says. “But we’re also here for anyone interested in simply buying high-quality, low-priced items for their homes. We are so blessed to help so many.”

Baldwin shares another story from her spot on the couch. This one occurred between 13 to 15 years ago. A women entered Upscale Rummage and browsed here and there but looked longingly, several times, at a framed sheet of lyrics written in calligraphy. They were the lyrics of Celine Dion’s “My Heart Will Go On,” the love theme from the movie Titanic.

“I was watching her as she shopped,” Baldwin says. “She bought a couple of items and headed toward her car. I then took the framed lyrics off the wall and caught up with her outside. I told here, ‘Here, take this. It’s a gift with purchase.’ ”

Upscale Rummage is located at 801 East Park Avenue in Libertyville. Hours are 10 a.m. to 4 p.m. Tuesday through Saturday, For more information, call (224) 440-5658 or visit upscalerummage.org.