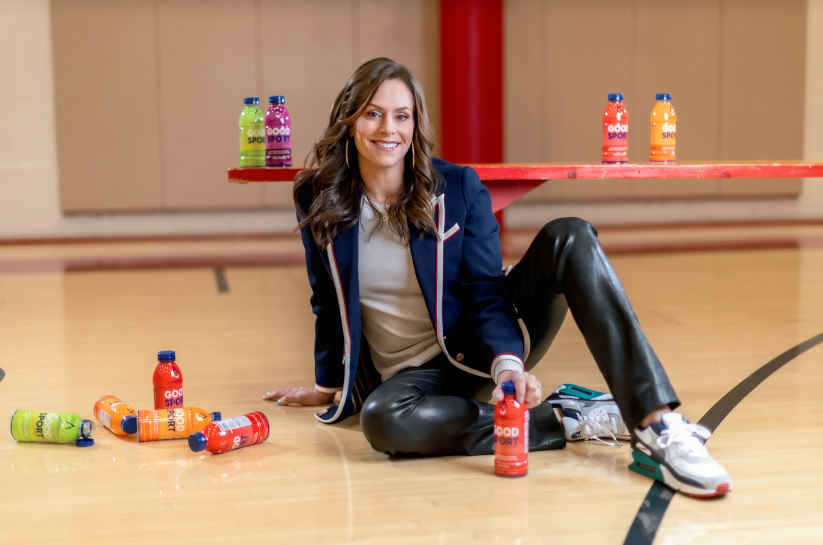 GoodSport Nutrition founder Michelle McBride happens to have a background in law, not health and fitness as one might expect. She began her career as a trial attorney in Chicago before transitioning to a legal start-up and, later, to a non-profit focused on translational cancer research and then to Chicago Ideas.

But when her son, one of her three children, started playing competitive baseball, she knew she had to find an alternative to the sugary, artificially sweetened sports drinks offered at nearly every game. So, she launched GoodSport, a natural milk-inspired sports drink with a goal of shaking up the saturated sports drink landscape and disrupting the dairy industry.

“I had read about athletes who drank chocolate milk to recover and bought it for my son as a healthier alternative after his games and workouts,” says McBride. “It wasn’t the thirst-quenching hydration solution we wanted, but it provided the inspiration to look at milk as a source of hydration during physical activity.”

A first-of-its-kind natural sports drink, GoodSport has been scientifically proven to provide rapid and long-lasting hydration by harnessing the electrolytes and carbohydrates found in milk. With a clear, water-like consistency, it’s available in four flavors: lemon-lime, fruit punch, wild berry, and citrus.

McBride and her team—including partner Andy Friedman, the founder and former CEO of SkinnyPop popcorn—spent nearly five years in research and development to crack the code on how to extract milk’s hydration benefits, eventually landing on an ultrafiltration process. The result? Three times the electrolytes and 33 percent less sugar than traditional sports drinks, plus no artificial flavors, sweeteners, or dyes. 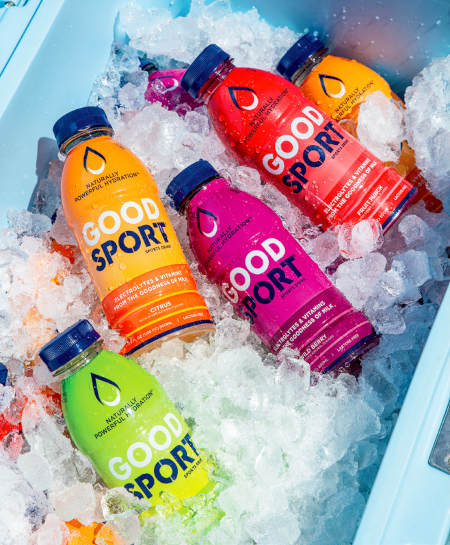 “Many people don’t know that milk is packed with electrolytes and that studies have shown milk is more hydrating than traditional sports drinks and water,” explains McBride. “When I learned that, I figured there had to be a way to harness the electrolytes, vitamins, and carbs from milk to make a natural sports drink.”

Now, teams in the NFL, NBA, MLB, and WNBA, including recent WNBA champions the Chicago Sky, provide GoodSport for their athletes. GoodSport invests significantly in rigorous product testing, so athletes can trust it will help them perform better and stay healthy. Studies have shown that GoodSport provides rapid and long-lasting hydration and also improves exercise performance.

“We are an official hydrator of the Chicago Sky,” adds McBride. “I’m not going to lie, it was pretty special seeing Wintrust Stadium lit up with GoodSport graphics during the winning game of the WNBA finals. It was such an exciting time for the team and our city. It was thrilling to be a part of it.”

However, McBride’s son is still the brand’s biggest fan.

“Could you imagine if I went through all of this trouble and he didn’t want to drink it?” laughs McBride. “All three of my kids have been resident taste testers with every version, every tweak, every new flavor. If it doesn’t pass their test, it doesn’t go any further. My son drinks GoodSport every time he plays or works out. I caught him packing several bottles in his baseball bag the last time we flew out of town for a tournament, but I had already beat him to it.”

Also important to McBride and the GoodSport team is creating a more positive sports culture and supporting programs aimed at getting more people in the game. With that in mind, GoodSport has partnerships with national nonprofit organizations including Project Play, an organization that believes in the power of sport to build healthy children and communities, Dare2tri, one that removes the barriers to sports and fitness by serving individuals with physical disabilities and blindness, and RISE, a national nonprofit that harnesses the power of sports to eliminate racial discrimination in our country.

“There are many notable benefits that come from participating in sports and fitness, but a win-at-all-costs mentality and lack of accessibility are causing an alarming decrease in youth participation,” says McBride. “Being able to positively impact the sports community, both on a national and local level, is truly a highlight. We are a mission-driven brand and keep ‘good’ at the core of everything we do.”

With that in mind, GoodSport is also committed to doing good for the planet through a sustainable supply chain. Instead of purchasing an abundance of milk and ultrafiltering it to extract what they need, GoodSport works with dairy processors who are already ultrafiltering milk and have no use for the part of the milk GoodSport uses. GoodSport then essentially rescues and upcycles this component of milk.

The brand is already available in grocery and convenience stores throughout Chicago—including Jewel this spring—and in gyms, fitness centers, and on Amazon.

“In sports, greatness implies a level of excellence few have achieved,” says McBride. “The word great is often tied to the winner, the highest point scorer, the most championship ring-wearer. We define winning differently—to us it’s about the good inherent in sports and the life lessons learned from the experience. You can’t achieve true greatness unless you’ve built upon a foundation of goodness. Goodness is what makes true greatness possible, in sports and beyond.”