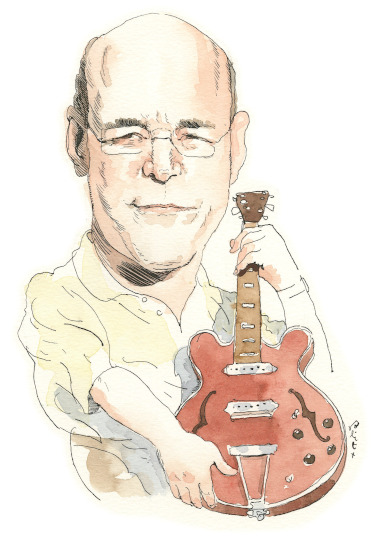 Lifelong Highland Park resident Jeff Gerchenson was 9 years old and the thrilled owner of an acoustic guitar—given to him by his mother, Bernice—when the thought of practicing the instrument was akin to a chore.

“My mother also arranged for me to take once-a-week guitar lessons in our living room,” recalls Gerchenson, now 73. “My instructor was Chick Johnston, an old guy who was legally blind. He had this all-maple guitar, with blonde sides. Took lessons from him for years.

“But I wasn’t into practicing. My mother forced me to practice.”

Decades later, as a rhythm guitarist and singer for the Basement Band, a rock ‘n’ roll cover band comprised solely of Baby Boomers with Highland Park ties, the same Jeff Gerchenson couldn’t wait to practice for hours with his band mates in his Highland Park basement.

They jammed on Tuesday nights. Gerchenson—a co-founder of the group, with Bill Fiely, in 1988—had turned his basement into a rehearsal studio, sound system included.

“I loved practicing, so much so that I’d sometimes fly home from business trips on Tuesdays,” says Gerchenson, who, for nearly a half-century, worked for his family’s business, a non-pharmaceutical company. “I still love practicing; missing a Basement Band practice session is never an option. We all love to play—music is a constant in our lives, an anchor. It’s also therapy for us, because when we’re playing, we’re having a blast.”

And performing iconic ‘60s, ’70s and early ’80s rock songs for nothing. The Basement Band has donated every cent of every dollar figure it would receive for entertaining at a variety of venues since redirecting a gig fee to a pediatric AIDS foundation in the 1990s. Other organizations that have been recipients of the band’s yearly generosity include Wounded Warriors, St. Jude’s Children’s Research Hospital, Keshet, and a group committed to brain cancer research.

Tens of thousands of dollars, Gerchenson notes, have filled the coffers of charitable entities rather than the pockets of Basement Band members.

“In some instances, we write band checks, 100 percent of funds received, to an organization, and in other instances we ask that checks be written directly to the charitable institution,” Gerchenson says. “Some events are straight fundraisers, where we donate our services. The band has never been about me, the oldest guy—the band’s ‘Charlie Watts’. I’ve always been grateful to be a part of something special.

“We’re performing strictly because of our love of music … and love of being together in a band, enjoying constant camaraderie, and doing some good along the way.”

“Bill sat in with us on a Tuesday night session,” recalls Gerchenson, a 1966 Highland Park High School graduate. “As soon as he started playing, it was like nirvana. What a fabulous guitarist. Plus, he’s a good guy with a good personality.”

The Basement Band, now a septet, last performed in August at its third Food Truck Thursday—organized by Noah Plotkin, of Life Rhythms, Inc. —at Jens Jensen Park in Highland Park.

The band has also elicited toe-tapping and head-nodding and impromptu dancing from audiences at a slew of other venues, including the now-closed Bertucci’s in Highwood, Lake Shore Country Club in Glencoe, Hyatt Regency O’Hare Chicago, Multiplex Athletic Club (now Sachs Recreation Center) in Deerfield, Norton’s Restaurant in Highland Park, and Park West in Chicago.

The Basement Band opened for the rock band Turtles at Park West nearly 15 years ago, in an event staged for Highland Park High School alumni celebrating their 60th birthday. Among the former 59-year-olds that year was Gerchenson.

“Members of the Turtles could not have been nicer to us,” Gerchenson says. “They treated all of us like real musicians.”

Gerchenson became a first-time band musician after passing an audition for the garage band Del-Vetts in the early 1960s. He was a Highland Park High School freshman at the time—and a rookie tuba player for the school’s band. Members of the Del-Vetts attended either HPHS or Deerfield High School and performed at the O’Hare Inn, after local basketball games, and at North Shore teen clubs, including Winnetka-based Rolling Stone (aka “The Stone”), which closed after a three-year run in 1967.

The Del-Vetts cut a demo and appeared on the cover of the Deerfield Review in 1963, when each issue of the newspaper cost 15 cents.

Gerchenson left the band to attend the University of Denver, where he majored in psychology.

“I was glued to the radio in Denver, listening to the Rolling Stones and the Zombies and other rock groups,” says Gerchenson, an avid fan of the Eagles. “I’d loved music ever since I was a kid listening to WCFL and Dick Biondi’s shows on WLS. Before the Beatles I admired music by Elvis, Carl Pickens, Chuck Berry, Little Richard, Buddy Holly.

“My favorite songs? ‘Roll Over Beethoven’ (Beatles) and ‘Peaceful Easy Feeling’ (Eagles) are up there. But my all-time favorite song is ‘Johnny B. Goode’ by Chuck Berry.”

Gerchenson met his future wife, Chicago South Side native and pianist Jodie, on a blind date. They got married in 1972 and raised four children: Shelbi, 46; Micah, 44; Kate, 41; and Jaclyn, 37.

“That can’t be normal, a band being together for that long and still going, with all of its members connected to the same town,” Gerchenson says. “Music got me juiced; that’s why my basement became a rehearsal studio for the band all those years ago. You know what we all did? You know why we’re all happy today? We found out what we love to do, and then we did it.