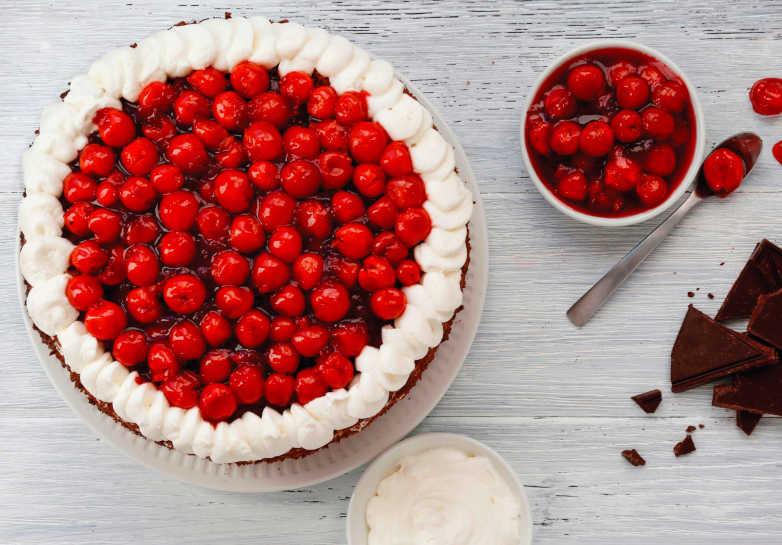 Chocolate fudge and tender yellow cake layers with vanilla cream and cherry fillings, and cherries on the top! This beautiful cake is one fancy Valentine. The recipe makes a four-layer cake, but we often make it with three as shown in the photos, saving one of the chocolate layers for another time.

Strain cherries over a bowl for at least an hour, catching the juice. Reserve 1/2 cup of the juice; refrigerate the rest for another use. Once cherries have strained for an hour, place them on several thickness of paper toweling and gently press to remove any remaining juice without squashing the cherries. Set aside to top the finished cake. Place cherry preserves in a small sauce pan over medium low heat, stirring occasionally for three minutes. Stir cornstarch into the 1/2 cup cherry juice you strained from the canned cherries. Whisk cornstarch juice mixture into the cherry preserves and continue cooking, stirring until the resulting cherry gel is cooked and clear. Remove from heat. Refrigerate cherry gel while you make the vanilla pudding and the cakes.

• 1 vanilla bean, cut in half lengthwise

METHOD: In a medium-sized bowl, whisk cornstarch into milk; add egg yolks and whisk well. Set aside. Place the sugar and salt in a second medium-sized bowl. Using the tip of a knife, scrape the vanilla bean seeds into the sugar. Use a whisk or fork to evenly mix the seeds with the sugar.

Put a ⅓ cup measure near your stove top. Place the vanilla sugar in a medium-sized heavy-gauge pot and add the cream and the scraped vanilla bean halves. Whisk over medium heat until boiling. Remove from heat. Scoop ⅓ cup of the hot sugared cream into the reserved egg yolk mixture; whisk to combine. Place the cream pot back on your stovetop and whisk all of the tempered egg-yolk mixture into the cream. Continue whisking for up 3 to 10 minutes until the mixture thickens into a pudding. Remove from heat; remove the vanilla bean. Place a mesh strainer over a large bowl, pour the pudding into the strainer and using the back of a wooden spoon, press the pudding through the strainer. Immediately cover the top of the pudding with a sheet of plastic wrap, pressing to ensure there is no air between the pudding and the wrap. Set aside to cool to room temperature. Once room temperature, place pudding in refrigerator while you make the cakes

METHOD: Preheat oven to 350. Prepare two, 9-inch baking pans by greasing them and lining them with parchment paper circles. (Note: you can also cut the circles out of clean paper grocery bags.)

In the bowl of a standing mixer, beat sugar and eggs for three minutes until fluffy and lemon colored. Blend in oil, sour cream and vanilla and beat two minutes more. In a medium-sized mixing bowl, combine boiling water and cocoa powder, whisking to insure there are no clumps. Mix in the soda and salt: the mixture will foam up. Pour into the batter and incorporate. Add flour at low speed and mix just until blended and smooth, scraping sides of bowl as necessary. Pour into the prepared pans. Rap each one sharply on the counter to release air bubbles. Bake at 350 for 35 minutes until cake springs back when lightly touched on the top. Remove from oven let rest in pans for ten minutes. Turn onto cooling racks and cool cakes completely. Note: If just using one of the layers to make a three-layer cake, wrap one of the chocolate layers and freeze for use another time.

METHOD: Place rack in the center of the oven and preheat to 350˚F. Prepare two, 9-inch baking pans by greasing them well with the butter and lining them with parchment paper circles. (Note: If you don’t have parchment paper, you can also cut the circles out of clean paper bags.)

In a small bowl, whisk egg yolks with 1/4 cup of the milk, the sour cream and all of the vanilla. Set aside. In the bowl of a stand mixer with whisk attachment, combine the sugar, flour, baking powder and salt, whisking at low speed for three minutes. Add the butter cubes and the remaining cup milk. Whisk for about 2 minutes at low speed, scraping the sides of the bowl as needed, until you have a smooth batter. With mixer on low speed, add the reserved egg yolk mixture to the batter in three parts, mixing each until just incorporated, before adding the next. Evenly divide the batter between the two buttered cake pans. Bake for 25 to 30 minutes until the cake springs back when touched at the center. Remove cake pans to a cooling rack; cool for 10 minutes. Turn cake layers out of pans to finish cooling.

METHOD: Sprinkle 1 1/2 teaspoons of unflavored gelatin over 2 1/2 tablespoons of tepid water. Allow to bloom while you work with the cream. Place three cups of heavy whipping cream in the bowl of a stand mixer fitted with whisk attachment. Add a pinch of salt. And 2 to 3 tablespoons powdered sugar. Whip cream until it begins to thicken, but does not yet hold a peak. Stop mixer. Heat the bloomed gelatin in the microwave in 5 second increments just until melted and clear (about 20 seconds.) Stir in the vanilla extract. Turn mixer on medium speed and in whip in the melted gelatin in a steady stream. Increase mixer speed to high until cream holds peaks. Turn off mixer. Remove 1/2 cup of the cream to whisk into the vanilla pudding to make the Vanilla Diplomat Cream for the cake filling. Remove another 1/2 cup of the whipped cream for the top of the finished cake.

• 1/2 cup of the stabilized whipped cream

• 3 cups of the vanilla pudding

METHOD: Using a gentle over and under motion, fold the whipped cream into the pudding until incorporated. Chill in refrigerator until ready to assemble cake.