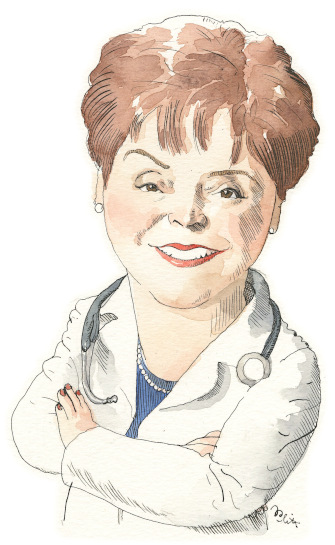 Teri Dreher has an airtight excuse for not remembering exactly how many times she and her family moved before her 18th birthday.

The number, after all, is somewhere north of 30.

“Around 37 times,” says the 60-something Dreher, a daughter of the late Dick Frykenberg, a U.S. Marine for 20 years. “I was good at making friends. I had to be, because I moved every three or four months.”

But they have nothing to do with U-Hauls and everything to do with her clients. Dreher represents patients’ interests in discussions with hospitals, doctors, nursing facilities, and insurance companies.

One of her recent patients had sustained a nasty fracture and found herself in a nastier nursing home.

“She’s a delightful, classy, lovely, educated woman,” Dreher begins. “The nursing home wasn’t a high-quality one. A doctor yelled at her, and the nursing care there was horrible. They treated her like pond scum. I worked on the case for about a week and found her an assisted living place in Oak Park. The place took care of all of her needs.

“She was so happy,” adds Dreher, a critical care nurse for 30-plus years before the launch of NShore Patient Advocates in 2011. “Her first night in Oak Park, she woke up three times and cried (happy teardrops). She thanked me three times the next day. As a nurse patient advocate, I’m a voice for the oppressed; I rescue patients. I’m part nurse, part lawyer, part guard dog.”

Disenchantment with the health care system triggered Dreher’s decision to leave nursing and pursue patient advocacy more than 10 years ago. Senior orphans—elderly people without family support—falling through the cracks of the system dismayed her.

“Modern health care was changing for the worse, becoming more and more fractured and leading to medical errors and miscommunication,” Dreher says. “Nurses and doctors were frustrated and overwhelmed. I didn’t feel right, in my heart, to continue as a nurse. But what I knew then, and what’s true today, is that patient advocacy is at the heart of quality nursing.

“Starting NShore Patient Advocates,” she adds, “was the best career decision I’ve ever made.”

Dreher—author of the book Patient Advocacy Matters: The Ultimate How-To Guide to Protect Your Health, Your Rights, Your Life and Your Loved Ones in Today’s Era of Modern Healthcare (2016)—also founded Seniors Alone Guardianship & Advocacy Services (SAGAS) in 2019. Its mission is to provide advocacy services for senior citizens and adults with disabilities who don’t have the means or capabilities to arrange their own care.

“Right now, patient advocates can be counted in the hundreds, not the thousands,” says Dreher, who created an online training program, Nurse Advocate Entrepreneur, targeted to nurses and social workers who want to help people more directly than the system allows. “There is more demand from patients than the industry can meet. Staffing shortages, especially in nursing, and Covid-related challenges have contributed to the erosion of quality in healthcare.

“What I’ve noticed in too many ERs is how little time doctors spend with patients. Too often they’re in and out of the room in less than a minute. I’m there to speak up for my patients, to point something out to a doctor in some cases. Our advocates at NShore strive to take the fear and frustration out of navigating modern healthcare.”

A fearless Dreher marched into her junior high school’s principal office when she wanted to play tennis for a school that fielded only a boys tennis team.

“I told the principal, ‘This isn’t fair,’ ” Dreher recounts.

The principal listened. The tennis team became a co-ed team in no time, with Dreher serving as the squad’s lone female.

Several family moves later, Dreher enrolled at Tantasqua High School in Sturbridge, Massachusetts, and eventually ran for Student Council president in her senior year. “Vote for Teri” lollipops blew away the campaign posters created by the other candidates.

Dreher won in a landslide.

“I was kind of shocked,” she says.

A sweeter feat would come later. Dreher earned the school’s prestigious Leadership Award in 1973. The previous honorees? All males.

“I had a can-do attitude,” says Dreher, the oldest of Dick and Phyllis’s nine children. “I also believed in myself. My father was a charismatic speaker, an inspiring man, a loving father. He valued leadership.

“I’ll never forget what he did after I received the award in our school’s auditorium. He stood up and clapped—for three to four minutes.”

Dreher attended the Massachusetts School of Nursing in Worcester and paid for the three-year program by working weekends as a nurse’s aide. In the late 1970s she moved to Chicago, where she worked as a nurse at the University of Illinois Medical Center.

“Those were exciting times,” Dreher recalls. “I worked rounds with famous doctors.”

She moved to Denver with her first husband and continued her career as an ICU nurse. They raised children Charles and Kelton. Teri and her second husband, retired IT professional Dean Dreher, have a daughter, 28-year-old Emma.

“ICU nurses,” Teri says, “are highly respected by doctors because, in addition to their knowledge and skills, they provide emotional and spiritual care for patients. I had always wanted to be a nurse. But patient advocacy is in my heart now, fully; it’s my purpose in life.”

The Alliance of Professional Health Advocates awarded Dreher its highest honor just a few years after NShore Patient Advocates held the trembling hand of its first client and didn’t let go until it had calmed down.

“If 2020 has taught us anything,” Dreher says, “it’s that if you don’t have a doctor or a nurse in your family, you need someone to advocate for you.”