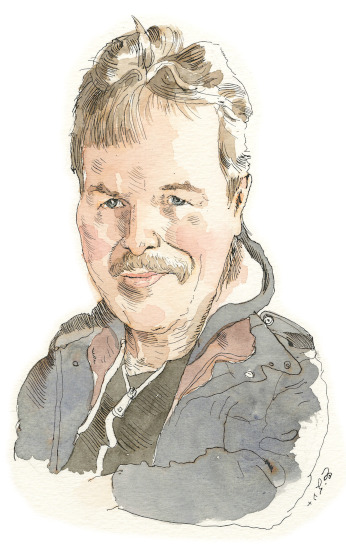 Gerry Lekas and his wife, Noreen, enter a movie theater in 1982. Night Shift, directed by Ron Howard and starring Michael Keaton, Henry Winkler, and Shelley Long, is about to start.

It’s a good bet that only two of the moviegoers—the Lekas couple—know that one of the soundtrack’s songwriters sits in the darkness.

None other than Gerry Lekas had written the lyrics to the country-and-western parody “They’re Tearin’ Down Tim Riley’s Bar.”

“I had no idea when we’d hear my song in the movie,” recalls Lekas, now 73, a Glenview resident, and a retired schoolteacher since 2011.

“In an early scene, the song starts to play, and a character yells, ‘Turn that awful music down!’ My jaw dropped. Then Noreen and I started laughing.

Not his bucket list. That wasn’t even a thing in the 1960s, when he devised his list and attended Lane Tech High School in Chicago. Among the other ambitious goals on The Gerry Lekas List: write a play, create a marketable board game, and author a book that he’d be able to spot on a library shelf someday.

“I’m just a guy,” says the self-deprecating Lekas, who, at the age of 62, sang and played the guitar, piano, and harmonica for The Rubys on the rock/country/Broadway-esque CD Down in Uptown. “Whatever I’m doing in life, it’s just me, playing a role I had set out to play.”

The role of author—his latest role—started out shakily. Lekas, who taught at Jack London Middle School in Wheeling and at Friendship Junior High School in Des Plaines, tried his hand at fiction. One problem: crafting a paragraph took longer than he’d expected.

But he took some simple and sage advice—“Write what you know”—and pivoted smoothly thereafter, needing only six months to complete Where the Tour Buses Don’t Go: Chicago’s Hidden Sites of the Mysterious, Macabre, Ghostly & Glamorous (2020, Black Lyon Publishing, LLC, 222 pages).

“What I have tried to do here is to create a self-guided auto tour for you that takes you to the more eclectic Chicago area sites largely unknown (or at least little-known) to most folks,” Lekas writes in the Introduction. “I am after a more quick-hit, fun read kind of thing here.

“In short,” adds the aficionado of all things mysterious and bizarre, “I have attempted to provide kind of a whirlwind guide to the people, places and events comprising many of the darker (and, in the case of the celebrities/movie stars, glammy) aspects of the Chicago area.”

Lekas, a huge fan of the Beatles and Green Bay Packers great Jim Taylor while growing up on Chicago’s Northwest Side, kicks off his work with a “Creepy Sites” chapter, which includes a spine-tingling section devoted to Marion Lambert, the purported “Lonely Ghost of Sheridan Road” (between Westleigh Road and McCormick Drive) in Lake Forest. Lekas also provides details of what allegedly happened inside and outside the allegedly haunted Schweppe Mansion in Lake Forest after the death of Laura Shedd Schweppe in 1937.

Interested in checking out where gangster John Dillinger had his face altered by plastic surgery before FBI agents killed him near Chicago’s Biograph Theater? Or where actor and Wilmette native Bill Murray learned to play golf?

Or a chilling account of Laurie Dann’s meandering, murderous rampage in Winnetka, in 1988? Lekas claims the community hasn’t fully recovered from the shooting death of 8-year-old Nick Corwin and wounding of five other students at Hubbard Elementary School.

Interested in where a young Marlon Brando worked as a movie usher in Lake County, before getting fired?

Then flip through the easy-to-navigate Where the Tour Buses Don’t Go.

Lekas’s journey to a teaching career began at Wright Junior College (now Wilbur Wright College) in Chicago, though the 1967 Lane Tech graduate and Army National Guard Soldier had no idea what he wanted to do for a living at the time. He first met his future wife at a party held at Northern Illinois University and decided to enroll at the DeKalb school to study and woo Noreen, presumably in that order.

Lekas transferred to Northeastern Illinois University in Chicago after a semester at NIU and double-majored in English and History.

Gerry and Noreen got married in 1972 and raised children Elizabeth, 43, and Joe, 40. They’ll celebrate their 50th wedding anniversary in November.

“The star I have always set my course by,” Gerry writes of Noreen on his book’s dedication page.

“I liked telling stories in the classroom,” Lekas says. “I know a lot of weird stuff, so I’d throw ‘weird’ at my students; the subject matter usually held their attention. Teaching is an art, not a science. It’s an art of people, specifically an art of reading students, and recognizing what’s best for each student.”

A former student who had read Lekas’s book paid Lekas quite a compliment not too long ago, telling him that he writes exactly like he talks.

Another former student, this one having caught up with Lekas at a recent Jack London Middle School graduation ceremony, had this to say: “Mr. Lekas, I can’t explain what you gave me, what you did to inspire me in your role as a teacher, but I do know that it was important. Thank you.”

“There’s nothing crawling around in my head,” Lekas admits.

But one aim remains on the original Gerry Lekas List, and Lekas—who briefly envisioned a career as a sponge diver—reveals it on the back of his book. It’s not as concrete as songwriter or as playwright or as author.

The perpetually jocular Lekas wants to attain enlightenment before he kicks the bucket.