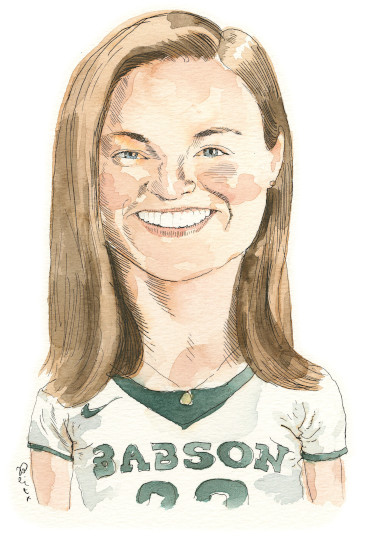 Field hockey’s pull was too strong to resist for Ellie Bisceglia.

Even in the face of a seemingly mightier force—the pandemic.

It was the summer before the start at the 2020 field hockey season at Babson College in Wellesley, Massachusetts, when Bisceglia—a 2017 New Trier Township High School graduate and 2015 state field hockey champion—learned that her senior season as a BC Beaver had devolved suddenly from hopeful to canceled because of COVID-19 concerns.

But, instead of turning in her stick and uniform for good at the NCAA Division III school some 16 months ago, Bisceglia, a Kenilworth native, listened to her heart.

“I loved field hockey, and the team, so much,” she recalls. “So much so that I was willing to sacrifice the start of my business career to play one more season.

“I wasn’t ready to let go of field hockey.”

Months before graduating with a degree in business with a concentration in marketing in spring 2021, Bisceglia applied for admission to Babson College’s Graduate School. She was accepted and started a Master of Science in Management and Entrepreneurial Leadership program last fall. Bisceglia then jumped at the opportunity to compete in a fourth field hockey season; the NCAA had granted an extra year of eligibility for athletes whose senior seasons were scrubbed because of the pandemic.

“I talked with my field hockey coaches about my graduate-school plans and my desire to return to field hockey, and all were enthusiastic and supportive,” the two-time co-captain says. “But I wasn’t just excited about getting to compete again in the sport I love; I was also excited for an academic reason—going to grad school would help me narrow, and clarify, my career goals.

“Junior year,” the 22-year-old adds, “I’d taken an elective course in marketing management, as well as a brand management class. I fell in love with learning all about consumers’ perceptions of brands and why they stay loyal to certain products. I wanted to study more about those topics. Stuff like that fascinates me.”

Bisceglia’s stifling defense and array of abilities to excel on penalty corners? Stuff like that invigorated Babson College’s field hockey squad in 2021. A right back with poise and speed and sharp passing skills, the 5-foot-5 Bisceglia helped the New England Women’s and Men’s Athletic Conference champion Beavers (21-2) amass a 17-game winning streak after a 4-1 start and reach a national quarterfinal game in the NCAA Division III Tournament.

“As soon as that game ended, I got emotional … good and bad,” Bisceglia remembers. “Good because I was grateful for the chance to represent Babson field hockey for a fourth season. Bad because I wanted to keep advancing. Every teammate of mine had a lot of passion and drive, from the start of our preseason in August until that national quarterfinal. I was lucky, getting to be a part of an incredible field hockey family and a super-special team.

“We weren’t the most skilled team, but we were gritty, fast, and we pushed each other. We stayed humble. I could not have been more proud of the way we came together and battled in every game.”

The daughter of Sean and Jennifer Bisceglia and primarily a soccer player before turning 10, Ellie first gripped a field hockey stick in the sixth-grade as a student at The Joseph Sears School in Kenilworth. Volleyball at Sears was the other fall sports option for female students at the time, Bisceglia notes. Jennifer had played some field hockey in her youth.

“I liked field hockey right away,” says Ellie, who also picked it up quickly. She has a twin brother, Chris, and an older brother, 25-year-old Jack. All three Bisceglia siblings are highly competitive.

“I wanted to win, in everything,” says Bisceglia, also a sailing buff. “Just like my brothers did. That helped me tremendously as an athlete, growing up with Chris and Jack.”

Bisceglia played lacrosse, in addition to field hockey, at New Trier. But she focused on field hockey and powerlifting in her senior year at the Winnetka school.

“I got to play for a legendary field hockey coach (Stephanie Nykaza), who built such a great team culture, year in and year out,” says Bisceglia, whose sports inspirations include tennis megastar Serena Williams and former World Cup alpine ski racer Lindsey Vonn, who won four World Cup overall championships.

Bisceglia then threw herself into staying fit as a freshman at Babson, in part because a classmate and good friend never stopped suggesting, “Let’s walk,” or, “Let’s run,” or, “Let’s lift.”

Bisceglia played in six field hockey games as a Babson freshman in 2017, a year after the program reached the Final Four of the NCAA Division III National Tournament. She saw action in 13 games, three as a starter, in 2018, before earning a starting nod in all 24 games as a junior, when she had two assists and helped the Beavers record seven shutouts in a 19-5 season.

Bisceglia wouldn’t mind making another return—this one having nothing to do with field hockey—in the near future. It would involve a job.

And a special part of the country.

“I would absolutely love to land a job in brand management in the Chicago area after completing my graduate work,” Bisceglia says. “Who knows? Maybe I’ll get to work in the consumer packaged goods industry, not far from my hometown.

“It would be exciting and scary at the same time,” she adds. “But I know I’ll be ready for whatever’s next for me. I’m super happy now, and I’m in a good place.”

Suiting up for Babson College’s memorable 2021 field hockey season put her there.