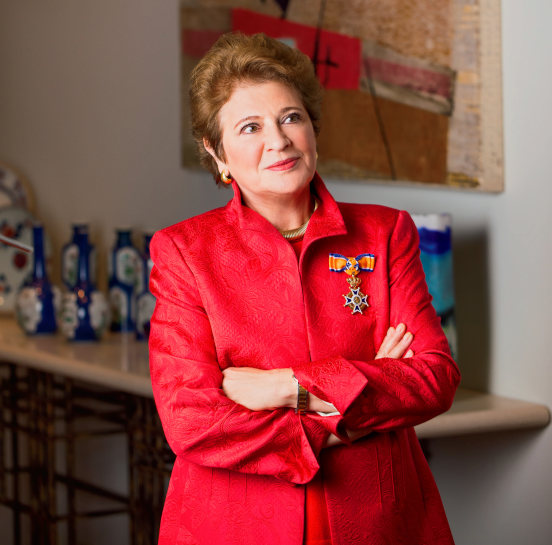 Ambassador Fay Hartog-Levin wearing a medal signifying her status as Officer in the Order of Orange-Nassau awarded to her by the King for her work to strengthen the bilateral relationship between the United States and the Netherlands.

The year was 2003. Winnetka’s Fay Hartog-Levin and her husband Daniel Levin were asked to enhance visibility and support for a little-known Illinois State Senator who had ambitious plans to run for the U.S. Senate.

“Just meet him,” she implored to friends, some of whom she saw spontaneously, at the East Bank Club. Not only was this the site of the informal meet and greet, East Bank Club was founded by visionary leader and widely respected real estate developer Daniel Levin, founder and chairman of The Habitat Company, and Hartog-Levin’s husband.

Who was the focus of the meet and greet? None other than Barack Obama, who won his U.S. Senate race, beginning his term in January 2005. In 2008, he was elected the 44th president of the United States.

All ships rise, as they say, and Hartog-Levin’s star rose as she supported Obama’s campaign, sharing her formidable network and leadership along the way.

Hartog-Levin’s career was already in full swing, as she had served as Vice President of External Affairs at the Field Museum, a role she essentially created, following 20 years in private legal practice representing primarily school boards, private and public colleges, and social service agencies.

Fast forward to the call of a lifetime in March of 2009. The call from the White House came on her mobile while she was on vacation in California: “Would you consider representing the United States as Ambassador to the Netherlands?” With a resounding “Yes!” 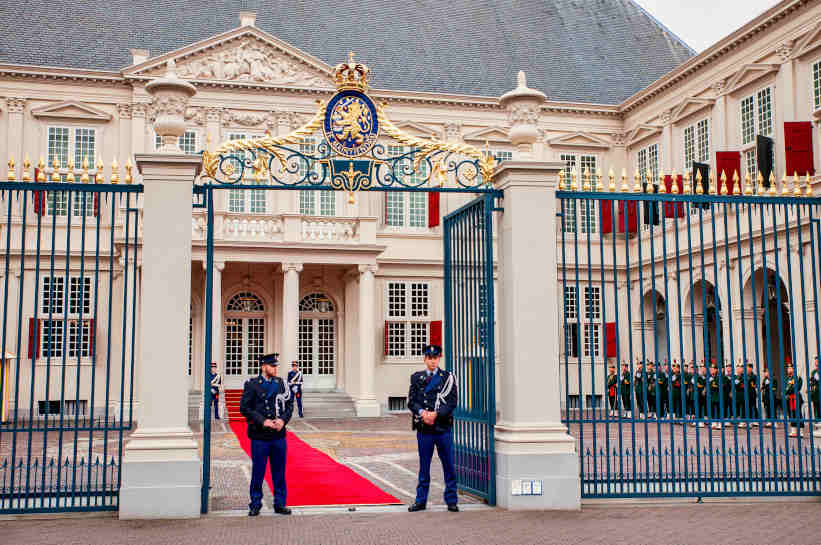 Hartog-Levin dove into the role of a lifetime: being named Ambassador of the United States to the Kingdom of the Netherlands. She presented her credentials to Her Majesty Queen Beatrix on August 19, 2009, and served until September 2011.

Her two years serving as Ambassador were without question, as she says, “True Cinderella moments, complete with a horse-drawn carriage, and a red carpet for my first meeting with the Queen. I was wildly aware that this very special time in my life, and that of my family’s, was fleeting and would come to an end.” 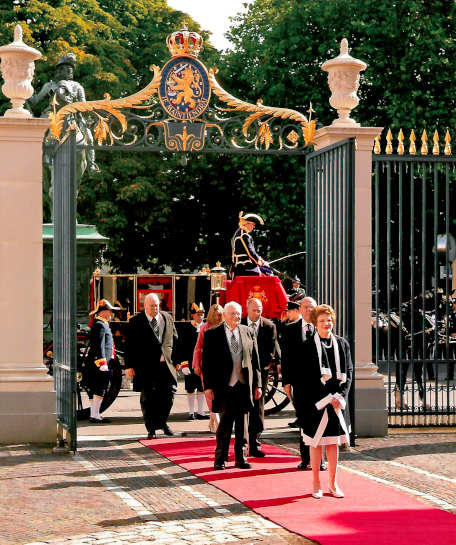 Fay Hartog-Levin arriving at the Royal Palace for her first meeting with Her Majesty Queen Beatrix.

An official envoy, an ambassador has the highest diplomatic rank for a U.S. official in that country. This point was underscored during a visit to the Netherlands by General Petraeus, who confirmed to a staff member that, “She (Hartog-Levin) outranks me in this country.”

Among the many peak memories from her ambassadorship, Hartog-Levin recalls when as she was presenting her credentials to Queen Beatrix, the royal band played the “Star Spangled Banner.”

“I wondered what my parents, Dutch Jews who fled from the Netherlands to Suriname in 1942 and emigrated to the United States before I was born, would have said. It was an incredibly special time,” she says.

By all accounts, Hartog-Levin’s role as Ambassador of the Netherlands was a highly recognized and celebrated one. The Office of the Inspector General reported that “The non-career Ambassador brings strong political instincts, high energy, a talent for public engagement, and personal warmth. Her legal background fits nicely in The Hague, which she has described as ‘at the center of the rule of law and the search for peace.’”

“I took the role very seriously to ensure that my efforts and that of my team in the Netherlands resulted in improved relations between the two countries and that we advanced U.S. foreign policy goals,” she explains.

“We did this by making sure that every day we were there, we served with professional excellence, the highest standards of ethical conduct, and diplomatic discretion. We focused on public outreach and cultural diplomacy, actively bringing people together. We hosted a Passover Seder at the Ambassador’s residence along with countless diplomatic events, large and small. We also made official visits to all 13 provinces of the Netherlands,” she notes. 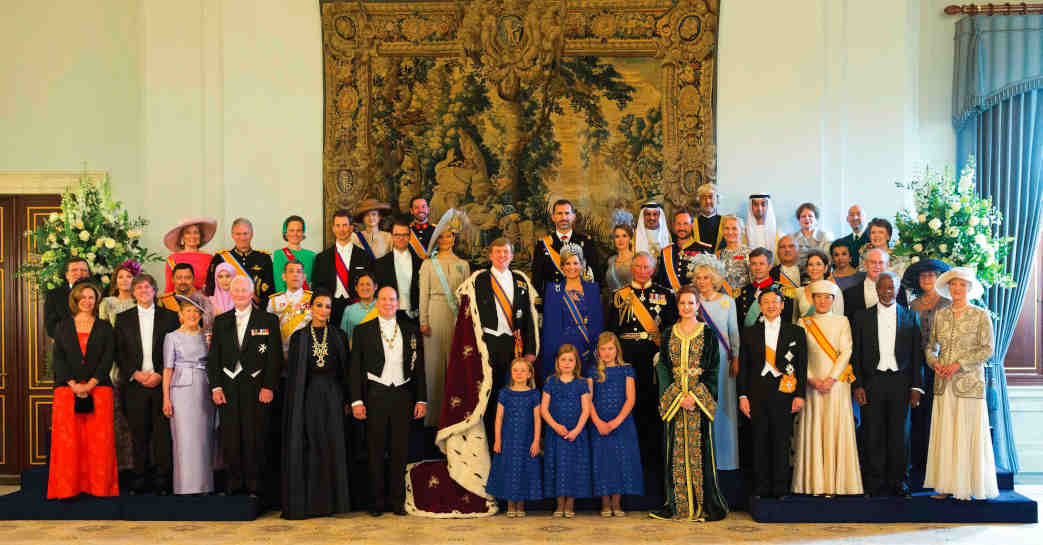 Dutch King Willem-Alexander and his wife Queen Maxima pose for a group photo with their Royal guests inside the Royal Palace in Amsterdam in 2013. Ambassador Fay Hartog-Levin attended the Investiture of the Dutch King and appears against the wall, second from right next to General Stavridis.

THE HARRY AND JEANETTE WEINBERG FOUNDATION

Fay Hartog-Levin’s leadership work continues to accelerate as Chair of the Board of The Harry and Jeanette Weinberg Foundation, a three-year role that began in 2020.

“The pandemic and resulting economic crisis underscore the importance of the Weinberg Foundation’s commitment to supporting individuals and families experiencing poverty, which has become even more critical at this unprecedented time,” says Hartog-Levin. 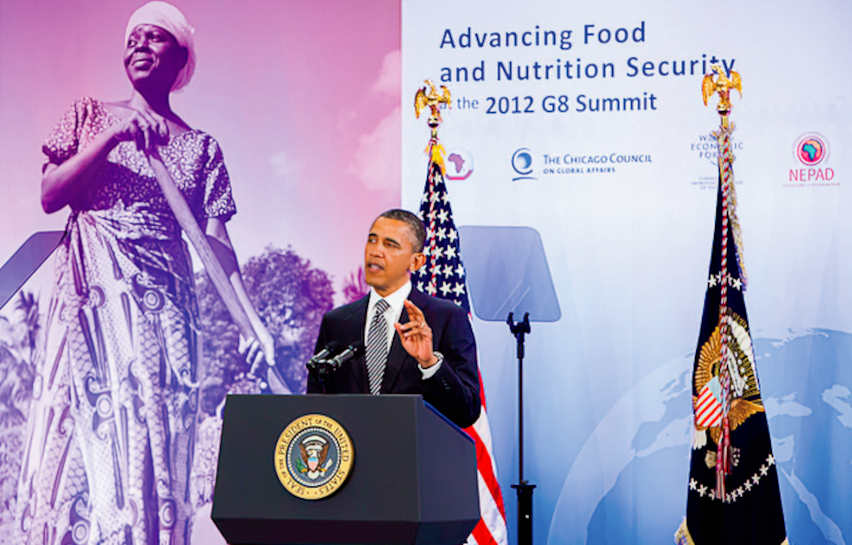 President Barack Obama at the Chicago Council on Global Affairs’ Symposium on Global Agriculture and Food Security in 2012.

In a role that combines her diplomatic experience, with her expertise in political, international, and environmental issues, Hartog-Levin is also a Distinguished Fellow at the Chicago Council on Global Affairs.

According to Chicago and the World: 100 Years of the Chicago Council on Global Affairs, in 1922, the organization was founded in the aftermath of World War 1, the Senate’s rejection of the League of Nations, and the influenza pandemic of 1918. “Today, at its centenary, it is both a forum for debate on global issues and a think tank working to influence those issues,” it continues. 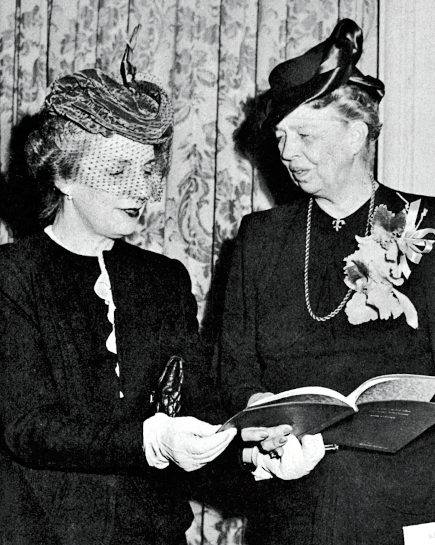 Eleanor Roosevelt spoke to the Chicago Council on Global Affairs on international human rights in 1947.

The 100th anniversary, concurrent to the current pandemic, COVID-19, emphasizes the Council’s commitment to the ideal of an informed citizenry at home and openness and involvement abroad.

With her vast experience and roles at both the Weinberg Foundation and the Chicago Council on Global Affairs, there’s no stopping Ambassador Fay Hartog-Levin. Her extraordinary life, marked by continued leadership, patriotism, and service, is an example for us all.

For more information about the Chicago Council on Global Affairs and its March 10 gala, visit thechicagocouncil.org.