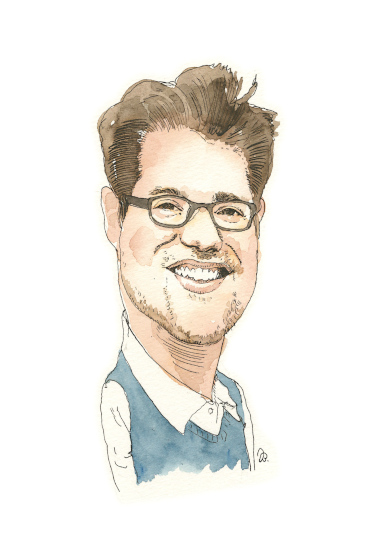 When a mutual friend introduced Josh Parsons and his future wife, fellow Minnesotan Sarah, at the University of Wisconsin-Eau Claire, neither Josh nor Sarah knew they had played together, sung together, and learned together, as tykes.

“Technically, you could say, we first met in preschool,” Josh recalls. “But I didn’t remember her, and she didn’t remember me. Here’s where the story gets fun. We found a photo of our class, and there’s Sarah, sitting right in front of me.”

Today — and every day—Jesus Christ is front and center in their lives. Josh Parsons has been the pastor at The Orchard-Northfield campus since 2016. The Evangelical Free Church exists to glorify God by multiplying God-centered, Christ-exalting, world-transforming believers through the Gospel in the greater Chicago area (the Northfield location is one of six sites in The Orchard network) and around the world.

“We are committed to the authority of the Bible as being Christ’s Word and the standard of truth for life,” says the 33-year-old Parsons, who married Sarah in 2010 and moved to Illinois a year later. “We are glad to exalt the work of Jesus. The Bible is at the center of all we do. We believe Jesus is worth following and want others to find joy in following Him, too. We love talking about Jesus and what He said and did, and what He meant, after God’s act of love sent His Son to live among people.”

Which brings us to Christmas and its true meaning. “For God so loved the world, that He gave His only begotten Son, that whoever believes in him should not perish but have everlasting life.” (John 3:16).

The meaning of Christmas, like it did for most adult Christians, dawned on Parsons gradually. Parsons, the youngster growing up in the Land of 10,000 lakes, loved all the perceptible things (10,000, at least) associated with the holiday: presents, snow, Santa Claus’s merriment, ornaments, beautiful, moving music, inhaling cinnamon rolls on Christmas morning, and more.

“Fully embracing what’s at the core of Christmas happened slowly for me, kind of like water lapping across rocks, eventually eroding them and changing their shapes,” Parsons says. “I still love those noticeable elements of Christmas, and I always will. But there came a time for me when the meaning of Christmas grew weightier, heavier—understanding the significance of the birth of Christ. That God would become Man to save me, to save you, to save all of us, from sins.

How wonderful is that?

“It’s sometimes easy to lose sight of Jesus, to lose sight of his meaning, especially during Christmastime,” he adds. “There’s that tendency to view Him as a ‘sidecar’, nice and dandy, a part of our life, but only as a part a couple of times of year to lift our spirits. But Jesus is a great Savior, and He should be viewed as such every day. He’s a reason to be hopeful and joyful.”

Parsons recently spoke with someone who told him, “I’m so lonely.”

People lose sight of that, too, this time of year. That there might be as many people who feel isolated as there are those who feel cheerful and celebratory.

“Think about those who have lost loved ones this year,” Parsons says. “This holiday season for them is very, very hard. Just last year it was a time of joy for those same people. There are grieving, desperate, discouraged people all around us. But if they choose to tether their lives to the center of this holiday’s meaning—the birth of Jesus—they’d find love that’s not only substantive but also enduring. That’s what I said to that lonely person.

“A powerful love like that,” he adds, “can carry people through the hardest days of their lives.”

Josh and Sarah and their three children— Nora, 6; Quinn, 4; and Haddon, 2—moved from Deerfield to Des Plaines in May. As Christians and as parents, they seek balance, especially from the day after Thanksgiving until the glorious day that is December 25.

“You’d never want your kids to lose the delight that comes with opening gifts and decorating the tree,” Parsons says. “My wife and I want Christmas to be a wonderful, joyful experience for our children every year. But we’re also aware of the importance of making it about Jesus, too, because it has to be. At this busy time of year, you want to instill a lot in your children.”

The Parsons grew up south of the Twin Cities in Minnesota. The son of Bob, a corporate coach, and Pam, Josh Parson figured he’d take the career path his father took, having decided to major in Organizational Communication at UW-Eau Claire. About halfway through his junior year in college, Josh sensed a calling to another field.

“I kept hearing people say to me, ‘Have you ever considered (pursuing a vocation in the church?’),” Parsons recalls. “Sarah, she’d mention gifts I have that pastors have. I also remember my dad asking, ‘Josh, why aren’t you on your way to becoming a pastor?’

“I didn’t have an answer for him.”

Parsons enrolled in the Trinity Evangelical Divinity School in Deerfield, started attending The Orchard-Northfield campus in 2011, and was named pastor five years later.

“God uses people to help us, to guide us, to enlighten us, to stir our hearts,” a grateful Parsons says.

The Orchard-Northfield campus, 847-531-9615, is located at 315 Waukegan Road. Visit theorchardefc.org for more information.