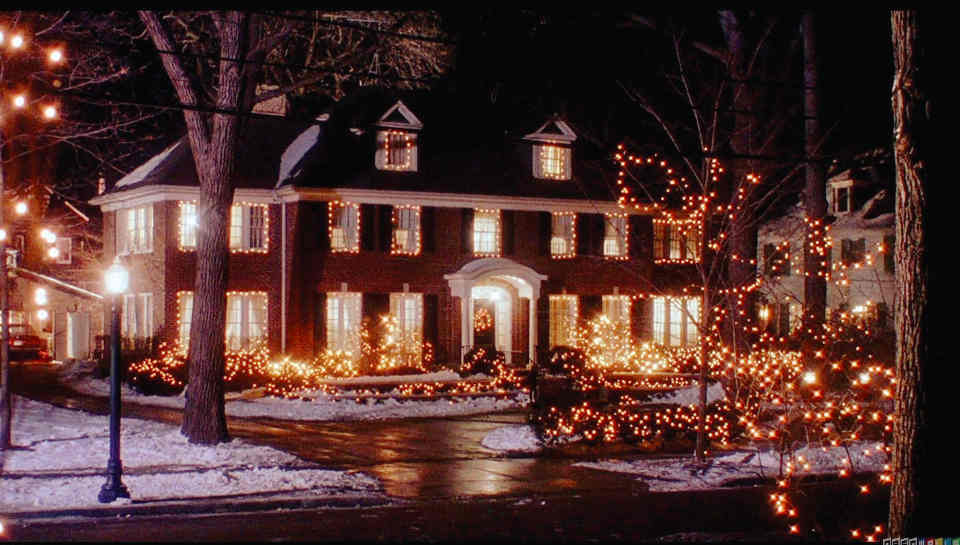 Tourists continue to make visits to the Home Alone house in Winnetka, more than 30 years after the movie premiered.

By chance or not, sometimes the setting for a film develops into a character all its own, as much as the human actors who inhabit it. One is hard-pressed to forget the Stanley Hotel in in Estes Park, Colorado—renamed the Overlook Hotel—in Steven King’s book and subsequent movie, The Shining. “Redrum,” anyone? Or the hallways of the old Maine North High School in Des Plaines that the writer/producer John Hughes deftly used to capture teenage angst in The Breakfast Club. Or the old house that was the backdrop for the movie The Big Chill, ostensibly set in Michigan, but is actually located where the film was shot, in Beaufort, South Carolina.

But movie sets for films with a holiday theme somehow stay with us. Home is for the holidays. There’s the Parker family home in Cleveland, Ohio, now a museum, that served as the setting for A Christmas Story, where Peter Billingsley’s character, Ralphie, did indeed almost shoot his eye out with his Red Ryder BB Gun. And who can forget Nakatomi Plaza, setting aside the ongoing, occasionally hostile, debate about whether Die Hard is really, really a Christmas movie?

So, it was with great fanfare earlier this month that Airbnb listed the iconic Home Alone house, 671 Lincoln Avenue, Winnetka, to be precise, available for one night only to four lucky Home Alone fanatics at the irresistibly reasonable price of $25. While the names of those who spent the night there were not disclosed by Airbnb, the home was aptly listed by Buzz McCallister, the abandoned Kevin McCallister’s prickly older brother. Surrealism at its finest.

“You may not remember me as particularly accommodating,” Buzz wrote in the listing. “But I’ve grown up, and I’d be happy to share my family home—my pizza, even—with you this holiday season. Just try not to let my tarantula, Axl, loose this time.”

Reportedly, the house was retrofitted to resemble the original movie set, paint cans and all, and even a supply of Kevin’s somewhat painfully applied aftershave. There was pizza as well, and Kraft Mac and Cheese. And indeed, Axl the tarantula was present, although contained.

“We may all be older and wiser now, but we’re never too old for holiday hijinks,” Buzz said. “So, this year, spend the holidays not-so-home-alone at my parents’ house.”

The North Shore, and Winnetka in particular, has a storied history as a backdrop for coming-of-age movies, due mostly to the late Hughes, a Lake Forest resident, who seemed to use the village as something of a muse. Along with Home Alone and The Breakfast Club, Uncle Buck, Risky Business, and Ferris Bueller’s Day Off are all reflective of Hughes’s vision of adolescence. This past June, the Winnetka Historical Society held its annual gala (virtually), titled “Home Alone Together,” which featured a presentation by documentary filmmaker and Winnetkan John Newcombe on the making of Home Alone and other films set on the North Shore. Attendees heard stories from family members who lived in the Home Alone house during the shoot, viewed never-before-seen video footage taken by a neighbor, and discovered the role local actors and extras played in the making of the film.

“It’s a pretty famous house and the house itself is really a character in the movie. It plays a critical role in that film, and I think that’s why so many people want to see it,” Winnetka Historical Society Executive Director Mary Trieschmann said at the time. “All of the indoor scenes were filmed in that house or in an identical replica they built on a set in Hollywood.”

While the “Home Alone House” remains privately owned, it’s not uncommon to see the street in front lined with cars, especially during the holidays, to catch a glimpse of the house where Kevin McCallister foiled the inept burglars Harry Lime and Marv Murchins, played hilariously by Joe Pesci and Daniel Stern.

Back in 2015, on the 25th Anniversary of the release of Home Alone, Stern reminisced to the Hollywood Reporter about the physical nature of playing his mostly inept burglar character.

“I can take a hit. It’s like sports; it’s good soreness because you had good fun doing it, as opposed to real injuries,” Stern said. “I got a bloody nose when I had to stick my head through the doggie door. I had to pull my head out quickly and I clipped my big-ass nose on the door thing.”

Over the years, the undisputed star of the film, Macauley Culkin, seems to be at peace with the skyrocket to fame that Home Alone provided him, although let’s not get caught up in the fact that he is now (gasp!) 41 years old and has moved on.

In 2018, Culkin sat down with Ellen DeGeneres to promote one of his projects at the time and discussed the somewhat conflicted relationship he has with the film.

“I don’t really watch the Home Alone films all that often. It’s background radiation at Christmastime,” Culkin told DeGeneres. “I’ve had people who want to sit down and watch it with me, which is both flattering and creepy.”

But icons are just that. For whatever reason—maybe they’re just good or maybe they just hit us at the right time—there are films and songs and books that get etched in our histories. And it’s not as if Home Alone needed the publicity from Airbnb. Made for a relatively paltry budget of $18 million, it grossed nearly a half billion dollar worldwide in theaters.

In the holiday spirit, Airbnb made an undisclosed donation to La Rabida Children’s Hospital, which serves people with complex illnesses and disabilities. It’s a fair guess the donation was more than the price of renting the Home Alone house, and hopefully Buzz had a hand in it to atone for his treatment of little Kevin.