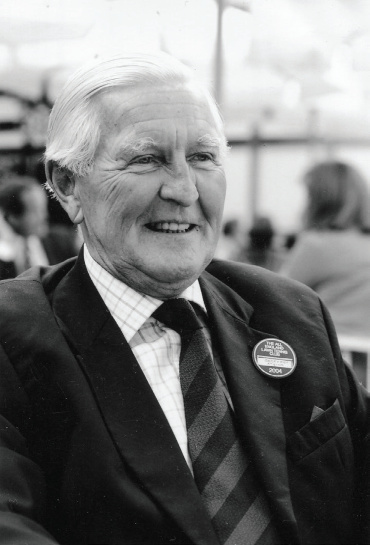 BY DAVID A. F. SWEET

An unbeatable racquets champion who held the world title for 18 years straight, Geoffrey Willoughby Thomas Atkinsâ€”who died last month at 94â€”was the Roger Federer of the sport: graceful, coordinated and able to win matches while hardly breaking a sweat.

â€śHe was competitive and focused on the court, but in general he was very laid backâ€ť says his daughter Lucinda Sheffield, who lives in Lake Bluff. â€śHe was a good ambassador for racquets. He was always a good sport.â€ť

Though he played in private clubs in North America and Europe as an adult, Atkinsâ€™ childhood in England was not rife with advantages. His father served in the Indian Armyâ€”then part of the British Empireâ€”and his upbringing did not suggest the privileged world that lay ahead.

Not only that, his future seemed to lead not to sportsâ€”but to acting. Atkins made quite a mark as a child actor in the black-and-white films of the day, culminating in the role of the Duke of Dorset in the 1939 movie Goodbye Mr. Chips, where lead actor Robert Donat captured an Oscar. Only 12 at the time, Atkins soon was offered a contract by MGM to move to Hollywood.

â€śI think there was a little wistfulness of what could have been,â€ť says Sheffield, pointing out her grandfather likely didnâ€™t want to uproot his family.

After learning to play racquets at Rugby in England, where he would hit the ball alone for hours, Atkins captured the British Amateur singles title in 1952 and 1953. The following year at the Queenâ€™s Club in London, he won his first world title. Over the ensuing yearsâ€”during which time he moved to Lake Forestâ€”he fought off a number of challengers before retiring in 1971 at 44. A new champion was crowned in 1972. Even when he retired from competitive racquets, he continued to be an excellent squash player as well as court tennis player, a sport where he had won the British Amateur championship three times.

Though his flat in London was filled with silver racquets trophies, his favorites were the two gold racquets he won during the championships at the The Tuxedo Club in Tuxedo Park, New York. To win one required victories over three straight years, a feat he accomplished twice.

Sheffield said her father was enamored with animals, and he also swam with dolphins on a vacation and with whale sharks in Australia. He and his daughter traveled to South Africa and other spots together, where he enjoyed sitting in the sun on the beach. As well, Atkins loved watching sports, often enjoying a cricket match and even snooker on television with his favorite drinkâ€”a gin and tonicâ€”in hand. He taught his granddaughter Pippa how to play backgammon. Said Sheffield, â€śHe was a gentle, kind sportsman who loved his family and nature and animals.â€ť

Atkins is survived by his twin brother Robert (Anabel), his son Nicholas (Rowena), his daughter Lucinda (Thomas Sheffield), and his grandchildren Matilda, Lilah, and Eddie Atkins, and Charlie, Henry, Sam, and Pippa Sheffield.

Services in England have been held. Donations may be made in his name to Chicago-based MetroSquash via metrosquash.org or sent to MetroSquash, 6100 S. Cottage Grove Avenue, Chicago, IL 60637.