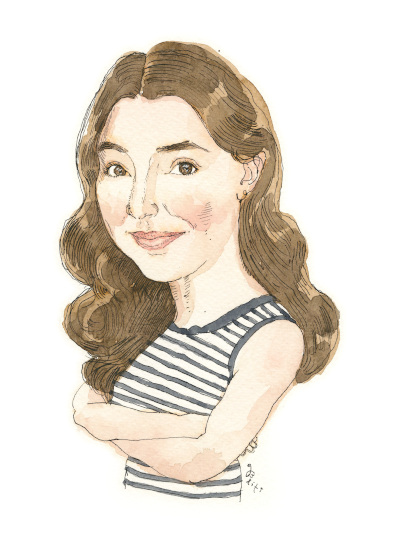 Holiday movies have come a long way since the days of Miracle on 34th Street and It’s A Wonderful Life. While they seem to be as plentiful as holiday sales at this time of year, some, such as AMC+’s Christmas with Felicity manage not to get lost in the seasonal shuffle. One of the reasons for that is young actress and Highland Park resident Saige Chaseley. As artistic Madison, the niece of the titular Felicity, Chaseley makes a delightful impression on viewers in what is her first acting role in a feature film. Chaseley, who also appeared in a 2020 episode of Chicago Med, was kind enough to take time out of studying for finals, to answer a few questions for The North Shore Weekend.

What does it mean to you have been cast in such a major role in your first full-length feature?

We were actually out of town for spring break when I found out that I got the part, and I was just crazy excited about it. I didn’t realize how big of a role it was until we got the schedule and saw that I filmed most of the shoot days. They also added a few new scenes with me that weren’t in the original script, which made me feel like they trusted me and were happy with my performance. The whole filming process was just amazing and so were all the people on the set. It was such an incredible experience, and I’m really grateful that I had the opportunity to be a part of it!

Your character Madison is described as a “moody artist.” As a creative person yourself, someone who acts, plays piano and writes songs, and crochets, do you think that “moody artist” is a fair label for someone with artistic abilities?

I think that being moody and being an artist are not mutually exclusive, because at least for me, being “moody” is a temporary feeling, but the label of an artist is more of an identity, which I’m really proud of. I definitely can be both though!

I actually have a relationship like that with my mom! We’ve always spent a lot of time together, especially in the car driving to and from figure skating practice. And now more recently on set at different projects. She’s somebody who I feel like I can talk to about anything, kind of like Madison does with Felicity.

Felicity is a baker who re-establishes herself in her old hometown with her tasty treats, including Christmas cookies. Do you like to bake, and if so, do you have a specialty?

Every year, I bake a bunch of different kinds of Christmas cookies with my siblings and cousins and grandma, and I’m not sure if this counts as a specialty, but the little Hershey Kiss Blossoms are always my family’s favorite! I also did a ton of baking over quarantine, including a big batch of failed macarons, and several loaves of bread with names, of course.

Madison recognizes the spark between Felicity and local farmer James, and even draws a picture of the two of them standing under mistletoe. Is drawing something you also consider to be one of your means of creative expression?

Oh, definitely not! I am terrible at drawing and whenever I try drawing people, they always end up looking possessed! I mostly try to stick to the performing arts, for everyone’s sake.

Madison makes a website and establishes a social media presence for Felicity. As someone who hosts a web series and is also on Instagram, what do you see as the pros and cons of the internet?

I think that the internet is a really great tool, especially with the pandemic and everything being on Zoom. However, I do feel like social media puts a lot of pressure on people to always have something exciting going on to post about and to always look their best to impress others. I find myself getting caught up in that sometimes, and just have to remember that what I see isn’t real life and that the Internet is more of a highlight reel without all the bad stuff going on.

You are currently enrolled at Chicago Academy for the Arts. What do you like best about being a student at that school?

Just being surrounded by all of the super talented people. All of the departments are so different, but all so impressive in their own right. I also really love being in the city and taking the train, because Chicago really is such a cool place! It’s a very unique school and I’m fortunate to go there.

You live with your family in Highland Park, and you’ve been fortunate enough to have a role on Chicago Med, as well as being in the movie Christmas with Felicity. What does it mean to you to have those kinds of opportunities so close to home?

It used to be that L.A. and New York were the only cities where you could find opportunities, but Chicago has really become a place with a lot of projects going on. The Chicago acting community is also so small, and it’s exciting to make new connections and meet such amazing people!

What are some of your favorite things about living in Highland Park?

I’ve lived in Highland Park my whole life, and my old house was right across from the Botanic Gardens. I used to go there all the time, so that’s definitely on my list. It’s also a town where everybody kind of knows each other, which I love, and most importantly, my friends and family are here! Even though I go to school in the city, I still love Highland Park.