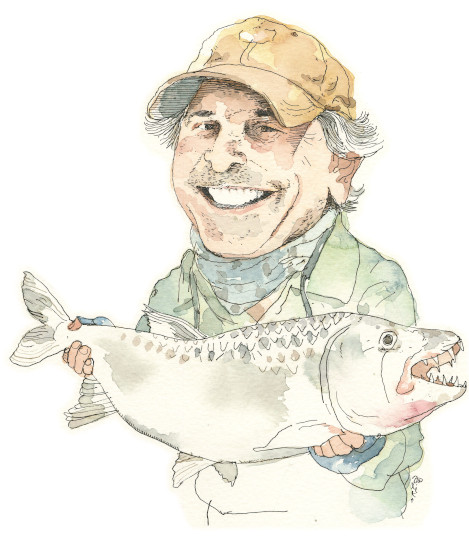 Ed Stein, Man of a Thousand Adventures and a fly-fishing aficionado, sits in the spacious, immaculate basement of his home in Highland Park, regaling a first-time visitor with details of adventures taken by his former Mather High School classmates.

Hang-gliding over Copacabana Beach in Rio de Janeiro? No. Stein did that.

Riding a horse to the top of the Pacaya volcano, in Guatemala, and seeing a young couple roasting marshmallows up there? No. Stein did that, got a whiff of that.

Stein, 77, recalls the 50th high school reunion he organized nearly 10 years ago in Chicago, specifically the 16-inch softball game that was played on a Sunday and the intrepid trip each batter would have to endure on the diamond after putting a ball in play.

“It would take most of us three minutes to get from home plate to first base,” says a chuckling Stein, who started spearheading Mather High School reunions in 1987 (the school’s 25th), after nobody had organized a 20th-year gathering. “Hey, we all were 68 years old. We survived those journeys. No serious injuries.

“I’m looking forward to our 60th reunion next year.”

Where there’s Ed Stein, there’s usually laughter. The man has a sense of humor that could fracture two or three of your ribs in no time. And he likes to laugh as much as he likes to make others laugh.

“Laughter,” the longtime divorce and custody lawyer says, “is the only medicine available today that does not come with  several pages of warning labels.”

But Stein is dead serious about all things fly fishing, a passion he discovered in the 1990s and, with the launch of his Fly Fish Traveler venture to serve as a host (not as a guide) for other fly fishing fans on trips all over the world, turned it into a hobby business 12 years ago.

Stein plans to join other avid anglers on a three-week fly fishing trip to Brazil, beginning in mid-December, his third adventure to the South American country this year.

Total countries visited, as a fisherman: 30.

Regular fishing still triggers the occasional adrenaline rush in Stein, but fly fishing is more of an active sport because it requires walking in rivers and casting a fly constantly.

“Think of regular fishing as driving a car with automatic transmission, and think of fly fishing as driving a car with manual transmission,” says Stein, who works out regularly at home and at a gym. “I prefer manual and fly fishing—you’re more in control in both. All fishing, to me, is fun. But there’s more of a thrill factor in fly fishing, which is a technical sport. Plus it’s more satisfy- ing than regular fishing is.

“I’ve never based the success of a fishing trip on the number of fish caught. Fishing is about the beautiful surroundings, the camaraderie you get to enjoy and develop, the relaxation. You don’t forget your problems on a trout stream, but, after a while, you see where your problems fit in the grand scheme of things, and suddenly they’re not such a big deal anymore.”

Stein “wasn’t a great student” from grammar school through his first three years at Roosevelt University in Chicago. Initially an English major before shifting his focus to RU’s business program, Stein took his first law class as a senior and aced it.

He then enrolled at Chicago-Kent College of Law and earned Dean’s List status every year. Great student, annually. In his last year at law school he clerked for a well-known divorce lawyer. After passing the bar exam and working for a firm for a few years, Stein opened his own office.

He won a highly contested Order of Protection trial in Lake County and was awarded the largest attorney fee ever (at the time) in a domestic violence case. Oprah Winfrey’s staff wanted him to appear on Oprah’s show to discuss the case. Stein had to turn down the request, citing client confidentiality.

“Law is challenging and competitive, two elements that appealed to me immediately, Stein says. “I loved the challenge of arguing a case both ways in law school; I enjoyed going up against other law students. As a divorce lawyer, you’re never stuck in an office all the time. You’re out and about, meeting people, hearing their problems. At times you have to be a part-time psychologist, too.”

Stein became a full-time spouse when he married a Chicago-born, Highland Park High School graduate named Andi, who was a schoolteacher when she met the attorney who would represent many celebrities, including sports figures, industry moguls, and their spouses (but not at the same time, Ed swears).

The couple lived in Glencoe before moving to Highland Park 41 years ago. They have two children—Michael, a commercial pilot, and Todd, a principal at a Dallas-based boutique hedge fund—and three grandchildren.

Andi owned an art and interior decorating business before becoming a North Shore real estate agent, first for Kahn Realty and then for Coldwell Banker.

“She’s a beautiful lady, a great mother, and she’s sensible, always keeping me grounded when I want to do things that are too crazy,” Stein says.

Stein has caught a 45-pound golden dorado, a tiger fish, a payara (also known as the “vampire fish”), a 25-pound, 46-inch muskie, a king salmon (his very first catch, at age 29), and way too many other species to list here.

“I learn something new about fishing on every trip,” Stein insists. “It’s a constant learning process.”

Visit Ed Stein’s website, flyfishtraveler.com, to contact him about deluxe worldwide angling adventures and to view many of his largest catches, all of which were caught on a fly and then released to be caught again.