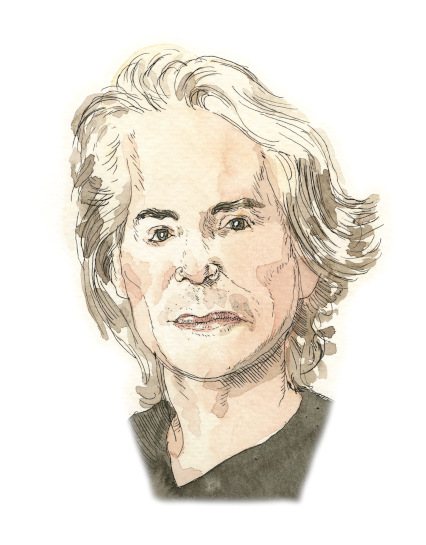 But not only because they’re the same person.

Bloch could be talking about a face.

Or purple and white flowers in a terra cotta planter.

“I get tremendous satisfaction in what I do for a living,” says Bloch, who has more than 40 years experience in plastic surgery in the Chicago metropolitan area, and who also founded Skin Deep Medical Spa (in Highland Park and in Glenview). “I get to take care of people who are young and still in their productive years, as well as help them gain more self-confidence and feel more comfortable in their bodies.

“I continue to find my vocation challenging, and I’ve always been intrigued by what’s next, what’s around the bend. I approach gardening in a similar fashion. I hire landscape architects that are far more talented than I am. They need input from me; I learn from them. It’s collaborative. You have to have a game plan—in plastic surgery and in gardening.”

Bloch, an avid artist and sculptor as a youngster, grew up in a New York City apartment and planned on becoming an architect. But he crumpled up that blueprint soon after he underwent surgery for acute appendicitis at the age of 19.

He’d pursue a position in the medical field instead.

“I remember thinking, in the hospital, while watching doctors and interacting with them, ‘This would be a pretty good gig,’” Bloch recalls.

“Having an aesthetic eye is somewhat learned, somewhat inherent,” says Bloch, whose wife, Susan, is a painter and a sculptor. “What I’m doing as a plastic surgeon is art, is sculpting. A perfect aesthetic operation is one in which the patient looks better, not like they had undergone a procedure. My job is to make people look ageless, youthful, refined.”

A college professor in her 80s perceived that the students in her classroom dismissed her because of her age before she greeted the students on Day One. The professor made a consultation appointment with Dr. Bloch, who recommended a facelift.

“The facelift,” Bloch says, “gave her confidence, as a professor in general, and especially as a lecturer. Students in her classroom listened to her, hung on to her every word, after the operation. But that had more to do with how she carried herself than it did with how she looked.”

A middle-aged man or a middle-aged woman enters a room full of mingling people. The man or the woman used to get acknowledged, immediately. But that’s no longer the case. The others in the room continue to talk or eat or drink.

The collective snub, perceived or otherwise, disheartens the man or the woman.

“People reach a point where they think they’re becoming invisible, no matter where they happen to be,” Bloch says. “We live in a society where people form an opinion of you before you even say a word; that’s reality. Most people care about how they look. I’ve always believed that if you don’t care how you look, you’re likely clinically depressed.

“I’m here to help people age gracefully, but I also encourage everybody I see to stay healthy, to work out regularly, and to eat properly. Quality of life is important, at any age.”

Bloch is in no hurry to retire. He closed his practice for two months at the start of the pandemic in 2020, and all that idle time at home turned him into Dr. Stir-Crazy.

“If retirement is anything close to what I experienced during those two months, I don’t want to retire, ever,” says Bloch, who has two sons, Ryan, a trader in New York, and Judd, a writer in Los Angeles. “I was totally bored. That was such a difficult time for me.

“I’m grateful that I’m in good health and my hands are still steady.”

“They hated the way they looked onscreen,” Bloch says. “They thought they looked horrible. The number of facelifts and nose surgeries we’ve performed has gone through the stratosphere. I have to say, the ‘Zoom Effect’ has been great for business. Being homebound for all those months allowed my patients to recover away from others, and, if they had to go out in public while healing, they got to do so while wearing a mask.”

Bloch has been named a Top Doctor by the publishing organization Castle Connolly, U.S. News & World Report, and the monthly magazine Chicago.

“I’ve been amazingly fortunate on a number of levels,” Bloch says. “I’m grateful that my parents encouraged me to pursue my passions. Some of my patients, I’ve known them for 30 years. They received treatment, through the years, at the appropriate time. They feel great, and they look great. It’s humbling to me, patients trusting me for as long as they have.