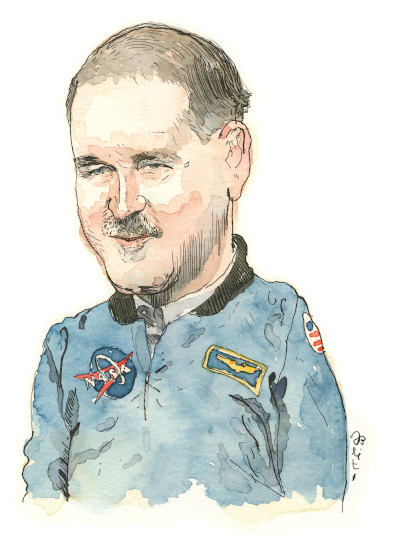 The hearts of attendees listening to Dr. Grunsfeld on “An Evening of Exploration,” meanwhile, swelled—and ached.

Dubbed the “Hubble Telescope Repairman,” Grunsfeld, 63, enthralled his audience at the fundraiser with vivid recollections of his 58-plus days in space (covering five space shuttle flights, from 1995-2009); revealed that the universe is 13.72 billion years old, thanks to the observations of the 26,500-pound telescope; and entertained repeatedly with his deadpan, self-deprecating sense of humor.

But the man, whose academic background includes high-energy astrophysics, cosmic ray physics, and exoplanet studies, flew from Colorado to his former hometown to help complete a critical mission for the GPF Foundation.

That quest: save lives by supporting education, appropriate treatment, and overall awareness of the dangers related to recreational use of street drugs.

Gregory Paul Friedman, deeply interested in cosmology and a Lake Forest High School graduate, died a week after taking a seemingly adulterated dose of the drug Ecstasy (MDMA)/ Molly that was provided by a childhood friend at a California concert in 2017.

His parents, Lake Forest residents Nancy and Ross Friedman (also ’76 HPHS graduates), were urged by family and friends to create a foundation in Greg’s name in 2018. The GPF Foundation seeks to work toward a future where the public and the medical community have the knowledge needed to combat the risks of recreational drugs.

“Handling adverse reactions to MDMA,” Ross Friedman says, “has been recognized as a blind spot in the medical community. The foundation’s mission is more critical than ever because of the dramatic increase in drug overdoses during the pandemic due to adulterated street drugs.”

Grunsfeld and the Friedman couple have a mutual friend in none other than Lake Forest resident and former astronaut Captain James Lovell, 92, of Apollo 13 fame. Lovell helped the Friedmans contact Grunsfeld, who gladly accepted the invitation to speak at the Fourth GPF Foundation Annual Event, which raised $150,000 and was attended by 450 guests (in-person and virtually).

Grunsfeld was 6, maybe 7, when he learned about NASA’s second human spaceflight program, Project Gemini. Starry-eyed and serious, he told his mother, Sally, one day, “I want to be an astronaut.

The coolest-looking tennis backhand in the world belonged to Bjorn Borg in the 1970s. So Grunsfeld did all he could to develop such a two-fisted stroke when he wasn’t acing every science course at HPHS or devouring science fiction books.

“Borg inspired me,” Grunsfeld recalls. “But guess what. It didn’t take me very long to realize that Borg hit his backhand better and faster than I did.”

Grunsfeld, the grandson of Adler Planetarium architect Ernest Grunsfeld Jr., earned a bachelor’s degree and a master’s degree in Physics at MIT before getting his doctorate in the same field of study at the University of Chicago in 1988.

While walking in the big city as a graduate student in Chicago, he noticed a familiar face. She recognized him, too. It was Carol Schiff (HPHS, Class of ’78), who competed for the Giants’ girls gymnastics team when Grunsfeld took photographs for the student newspaper.

They went on their first date—you know what they say about “the third time”—after that encounter in the city and later got married. How charming. John and Carol have two children.

Grunsfeld joined NASA’s Astronaut Office in 1992, and found himself aboard Endeavour for his first space shuttle flight in 1995. During his fifth and final shuttle flight, aboard Atlantis in 2009, he successfully serviced and upgraded the Hubble Space Telescope, during which he was the lead spacewalker for Hubble servicing activities.

In 2012 he was named associate administrator for the Science Mission Directorate at NASA Headquarters in Washington, D.C., and made television appearances to discuss the successful landing of the Mars Curiosity rover.

Another title of his was NASA chief scientist.

But nothing in Grunsfeld’s otherworldly career thrilled him more than the combined 58 hours, 30 minutes he spent during eight spacewalks. And, if you’re wondering if his nearly two months in space had suspended his aging process compared to Earth-locked people born on the same date (October 10) and year (1958), wonder no more.

“I returned to Earth, after my last mission, about a millisecond younger,” says a grinning Grunsfeld, who probably did the computation in his head.

“It was absolutely magical up there,” he adds. “I loved being in space. I loved being in a spacesuit. I remember taking the time to look back at Earth, admiring that spectacular view and my surroundings, and then feeling my heart rate drop.

“I was as relaxed as ever.”

Retired since 2016, Grunsfeld still ascends great heights—minus the assistance of a propulsion system. The pilot/mountaineer/cyclist/sailor climbed Denali (also known as Mount McKinley, in Alaska), reaching the highest peak in North America, with a summit elevation of 20,310 feet above sea level.

“I’ll never get tired of exploring,” he says.

For more information about the GPF Foundation, visit gpffoundation.org.