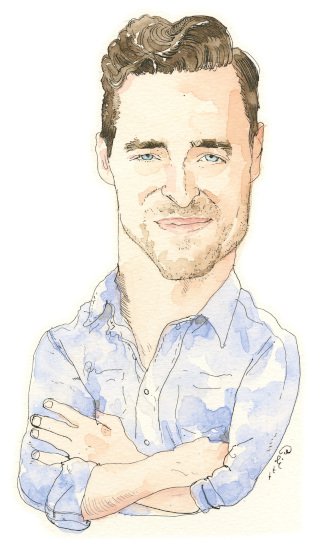 The wooden floor in Aaron Umsted’s bedroom in Oklahoma never had a chance.

As a teen growing up in Durant, Oklahoma, Umsted would plop in a VHS tape— remember those?—and record the televised awards show. He’d then marvel at the choreography of the nominated musicals and do his best to imitate every step, every movement, along his bedroom floor.

Count on him to leave another indelible mark in Illinois—this time as Children’s Theatre of Winnetka’s first-year Artistic Director/Show Director. The Chicago-based teacher, actor, dancer, and director/choreographer can’t wait for audiences to delight in the production of CTW’s You’re a Good Man, Charlie Brown (this weekend, November 18-21).

“Dancing is in my blood,” says Umsted, who earned a Jeff Award nomination in 2018 for his portrayal of Will Parker in, yep, Oklahoma!, at the Marriott Theatre in Lincolnshire.

Umsted, back when he was the lone male dancer at Durant High School, had to have a blast in musical theater at Southeastern Oklahoma State University, also in Durant, because DHS didn’t have a theatre department. From his sophomore year until the end of his senior year at DHS, Umsted enrolled in SOSU math, history, nutrition, and government classes and snatched lead roles—including Billy Crocker in Anything Goes, as a 17-year-old—from college-aged actors.

“I was a lonely kid in high school,” Umsted says. “It was rough going for a while. But I found happiness while training and performing as a dancer, first in jazz and tap as a 15-year-old, and later in ballet.”

The University of Oklahoma welcomed him with open arms, and wide-open theater doors, next. The Musical Theatre major landed the lead role, Prince Dauntless, in Once Upon a Mattress and intensified his love for dance under the tutelage of Lyn Cramer, a professor of Musical Theatre Dance at the school in Norman.

“She’s a powerful person, full of passion, and she’s still there,” Umsted says, adding another mentor with heaps of musical theater knowledge, UO Professor of Performance Paul Christman, continues to send him scripts and scores. “Lyn is all things dance. What a force.”

Umsted returned to Southeastern Oklahoma State University, where he earned a Master of Education in Theatre Pedagogy.

He then arrived in New York as a dancer, bent on scuffing up more hardwood and making a living along the way. Umsted toured North America with the Broadway companies of A Chorus Line, Disney’s Mary Poppins, and the Tony Award-winning revival of Anything Goes.

“I found there to be too much focus on Broadway in New York,” says Umsted, in his sixth year as a Chicagoan. “I wanted to dance, direct, choreograph, and teach. Do it all, basically. I’d met friends in Chicago, while touring, and I remember looking around and thinking, ‘OK, I love this neighborhood, and I love that neighborhood, too.’

“I was excited to move and work here.”

Umsted’s Chicago-area credits, in addition to his stint at the Marriott Theatre Lincolnshire, include productions with the Chicago Shakespeare Theatre, Paramount Theatre, and Drury Lane Theatre in Oakbrook. He recently taught musical theatre classes at Roosevelt University and at the Chicago Academy for the Arts.

And now he’s laser-focused on guiding and inspiring North Shore children who will entertain and enthrall audiences as cast members of a musical comedy that has a serious message amid a persistent pandemic: finding, and embracing, happiness.

The late composer/author Clark Gesner created You’re a Good Man, Charlie Brown in 1967, after getting approval from Charles M. Schulz to base the light play on Schulz’s Peanuts characters.

It addresses a slew of feelings, from wild optimism to utter despair.

“It identifies what it feels like to be lonely, happy, loved, and sad,” Umsted days. “Each scene is set up on stage like a series of comic- strip panels, with a punch line at the end. Life, for many, has many ups and downs. Struggles in everyday life are real experiences, challenging experiences. Finding hope, despite difficulties, is a theme in You’re a Good Man, Charlie Brown.

“You think of Charlie Brown,” he adds, “and you think, ‘This kid gets rejected so many times, yet he never loses hope.’ ”

“It still amazes me,” Umsted says. “It’s been a wonderful project, this production, with everyone coming together, most of them more than willing to do behind-the-scenes work. Parents and volunteers are helping me with the sets and with the costumes, with rehearsal set-up and props and ticket sales. Their kindness is through the roof.

“And the kids—I love how happy they are.”

You can’t help but root for Charlie Brown, the kid with less hair than most newborns, the kid with a surplus of latent cheerfulness that’s longing, pressing, to surface and stick around until his happy eyes close at bedtime.

But you can’t express that love until you do something else. Something vital.

Umsted knows exactly what that is.

“Being ourselves,” he says, “is what we need to find happiness.”