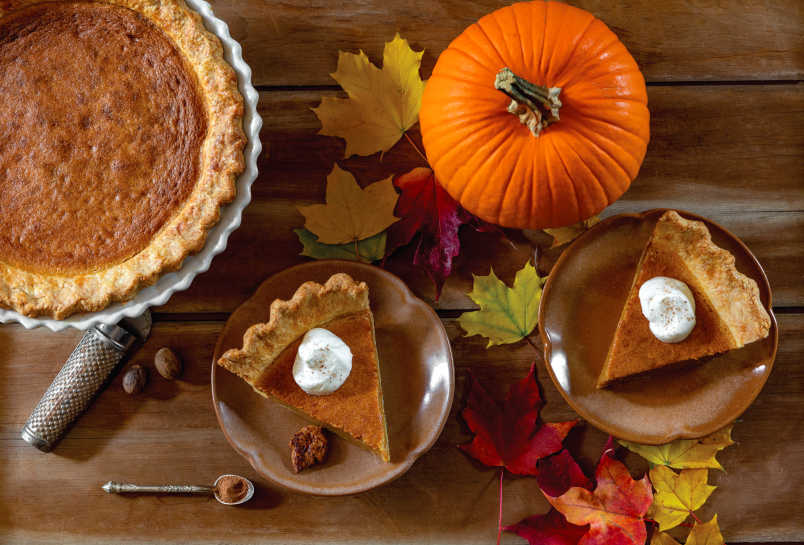 Turns out those cute pumpkins you purchased for Fall decorating are very easy to bake into delicious fresh pumpkin pies. With names like Baby Bear, Cinderella, and Early Sweet Sugar Pie, these 1-. to 2-pound darlings stand about six to eight inches tall, have sweet, dense flesh and were cultivated specifically for cooking and baking.

Our Sugar Pumpkin Cream Pie is made with Sugar Pie pumpkin, although you can use one of the other varieties. Simply cut in half, culled of seeds and strings, and roast for 50 minutes, the little pumpkin yields the perfect amount of smooth flesh to make two pies. To make this dessert extra special, we’ve included maple sugar and cream in the mix, plus cinnamon, ginger, and nutmeg. You’ll separate the yolks from the whites of the eggs in the recipe, whipping the whites to soft peaks and then folding them in to the filling for a luscious velvety result.

FOR THE ROAST PUMPKIN:

FOR THE PIE CRUSTS:

FOR THE SUGAR PUMPKIN PIE FILLING

• Garnish with additional whipped cream and sprinkling of grated nutmeg

Preheat oven to 400 degrees. Wash pumpkin well and pat dry. Using a sharp knife, cut pumpkin in half. Using a serrated-edged spoon scrape out and discard seeds and fibers. Place pumpkin halves, cut side down in baking dish and roast for 50 minutes until flesh is very tender. (Make pie crusts while pumpkin roasts.) When roast pumpkin is cool enough to handle, scoop out flesh.

In a large shallow bowl, sift the flour and stir salt and sugar in. Cut the two sticks of butter into tiny pieces and scatter over the flour. Using two knives, one in each hand, pull knives in a motion from the center out to cut the butter into the flour. Then, with cool fingertips, toss and break up each of the remaining larger bits into the flour until it resembles damp sand. Pour in the milk or cream, a small amount at a time, and stir with a fork until the dough begins to gather up. Don’t add too much liquid, it’s OK if it’s not all one mass. Cover your clean work-surface with two sheets of overlapping plastic wrap to make a large square. Scrape the pie dough onto the center of the plastic. Pull the ends of plastic up around the dough and squeeze to form a nice ball of dough. Cut ball of dough into two pieces. Cover work surface with another two overlapping pieces of plastic wrap. Place one of the dough balls on the center. Flatten with your hands to make a ó inch-tall disk. Cover with two more pieces of plastic wrap. Gently pat out dough through the plastic and then roll out dough to make a large circle. Place plastic wrapped circle on a pizza pan and place in refrigerator. Repeat the process with the other piece of dough. Allow dough to chill for ó hour. Once chilled, remove one of the plastic wrapped pie crust circles from fridge. Roll out a bit to ensure the circle is one inch larger than the circumference of your pie dish. Remove plastic from one side of the crust. Flip crust over pie plate and ease into the plate, removing the remaining plastic. Gently nudge crust into the plate, pressing down to make sure there are no air pockets, leaving the excess dough around the circle extending over the edge of the dish. Prick the bottom of the crust with a fork to ensure there are no air pockets. Repeat process with second pie crust. Tuck and fold edge of crust under, and crimp attractively to form the edge of each pie. Brush both pie crusts with egg wash. Set aside.

Preheat oven to 425 degrees. Measure 2 cups of pumpkin flesh into a large bowl. Using an immersion blender or whisk, whip pumpkin into a puree. Blend in brown sugar, maple syrup, cinnamon, salt, ginger, nutmeg and egg yolks. Whisk in cream and corn syrup until no streaks remain. In the bowl of a stand mixer, or by hand, whip egg whites until soft peaks form. Using a spatula and an over-under motion, fold whipped egg whites into filling until no streaks remain. Divide filling between the two pie crusts. Rap filled pie dishes on counter several times to release any trapped air bubbles. Bake for 10 minutes at 425 degrees. Decrease heat to 350 degrees and continue baking pies 35 to 40-minutes or until filling is set (just jiggles a bit) and crusts are golden brown. Cool. Serve with dollops of whipped cream topped with a light sprinkling of nutmeg.