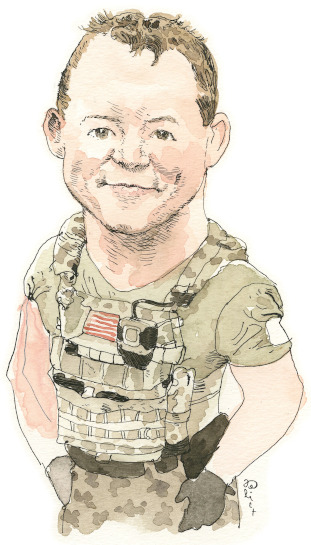 Go ahead, thank former Navy SEAL Shane M Anderson for his service to the country.

But don’t expect a simple ‘thank you’ in return.

The 43-year-old father of three and 13-year veteran, who completed tours of duty in Iraq and Afghanistan and the Philippines, will shoot you a quick, genuine, seven-word reply:“Thank you for being a Great American.”

Since 2013, Anderson has been training and mentoring future sailors at Naval Talent and Acquisition Group Chicago in Great Lakes. Great Lakes is the home of the United States Navy’s only boot camp, located near North Chicago in Lake County and where Anderson—a former professional skateboarder wannabe from Wisconsin and one time 3D graphics firm employee in Indiana—found himself a couple of years after the September 11 attacks in the 2001.

“I was working out, on a treadmill, when I looked up at a television in the gym just in time to see the second plane hit the World Trade Center,” Anderson recalls. “I remember thinking, ‘We’re at war.’ People were being attacked for being Americans and for believing in the American way of life.”

This Veterans Day, Anderson—who lives near Sheboygan, Wisconsin— will do what he does every November 11: work out.

But it will go beyond time on a treadmill.

Well beyond. “It’ll be brutal; it’ll make me gasp,” Anderson says. “I do the heavy workout every Memorial Day, too. And I’ll do it early, in the dark, away from everybody. It’s my way to pay homage to all those in the military who gave up their Easter’s and their Christmases and their time with family to be where United States forces needed to be. I can’t tell you how many times I heard, in places all over the world, ‘Thank God, the Americans are here.’

“What I’ve always believed is that we’re all one race—the human race.”

Anderson’s early life was one, in several ways, that epitomized the spirit of the “fail forward” way, or, to purposely and deliberately use failure to find success. A taekwondo and video games adherent, he dropped out of Cedar Grove-Belgium High School in Cedar Grove, Wisconsin, after his junior year.

A friend of his father Darwin got Shane a job in a factory. That meant the teen had to set his alarm at a time that started with “4” and ended in “a.m.” Anderson worked for a spell at the factory and came to a realization in no time.

“Got straight As, because that’s what I needed to get in order for my dad to pay for my rent in Indianapolis,” Anderson says. “My dad (who died at age 50, in 2002) was a great man, full of unrelenting love. He was tough, but always on my side, a man who reminded me how important it was to invest in myself.”

One of the most impactful conversations Anderson had with his father was the one they had after 9/11. Son called father and uttered, “We need to do something to stop terrorism.”

Darwin replied, “Don’t you mean that military folks have to do something? You want them to do your work, don’t you? “Son,” Darwin continued, “are you the man you want to be now?”

His answer, a nanosecond later: “No.”

Anderson’s aim before the phone call was to be the best video game designer he could be. That changed, abruptly. Enemies had attacked free people. Darwin, a former Nuclear Navy machinist mate sub service, told Shane that war is hell and encouraged him to take a look at the history of wars. Every bit of it.

“I told my dad, ‘I want to train and become a Navy SEAL,’” he recounts.

The father heard the earnestness in his son’s voice and concluded the conversation with an order: “Don’t you ever tell your mother (Rhonda) that we had this conversation.”

Shane Anderson fell short of completing his BUD/s class at Naval Special Warfare Center Coronado, but he got orders to the Mobile Communications Team 1 and deployed in Iraq in 2004 as a radio operator and worked closely with the SEAL team, for nearly nine months.

“That’s when I knew I wanted to achieve TG (Team Guy) status,” Anderson says. “The world depends on U.S. When the U.S. shows up everybody there knows that everything will turn out OK.”

Anderson completed his second attempt at BUD/s training, in 2006, and later aced enough courses to become a medic, a communications specialist, a sniper, a canine handler, and a Joint Terminal Attack Controller (JTAC).

“I wanted to be an asset to our team in as many ways as possible,” says Anderson, who almost died in 2010, in Iraq, after the RG-33 armored vehicle in which he was riding flipped, with the incident causing a serious head injury. “I want to make sure that I earn my Trident every day.”

“My Trident,” a part of the official Navy SEAL creed states, “is a symbol of honor and heritage. Bestowed upon me by the heroes that have gone before, it embodies the trust of those I have sworn to protect. By wearing the Trident (a golden eagle with an anchor, a flintlock style pistol, and a trident in its talons) I accept the responsibility of my chosen profession and way of life. It is a privilege I must earn every day.”

Anderson met his future wife, Abigail, for the first time when they were seventh graders. She was shy; he was “rowdy,” he says. They have three children: Syrus Christian, 14; Lilly Faith, 12; and Oliver Darwin, 7.

“Fatherhood, by far, is the greatest ‘job’, the most amazing job, I’ve ever had,” says Anderson, who co-owns the Sheboygan Falls-based carbon fiber manufacturer, Brothers Composites, and is thinking seriously, after his Naval Station Great Lakes days, of launching a coaching/mentoring venture (for kids, teen, and adults) and naming it Legacy.

“Unlocking people’s potential is my vision. Creating a meaningful life for myself and others is my purpose. Being a good dad … that is my greatest desire, it is the best version of me. It is why I do what I do.”