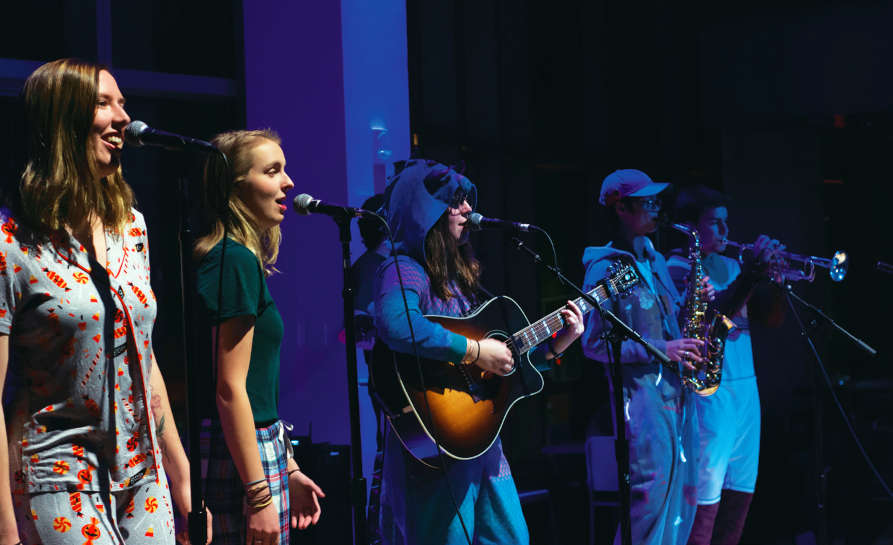 Highland Park High School graduate Meryl Rudy, shown in the center with a guitar, recently relocated to Nashville to pursue her music dreams.

We are products of our environment.

This is especially true for Meryl Rudy, a songwriter from Highland Park, whose artistic instincts were fueled by Highland Park High School’s legendary arts and music department, and teacher Remington Clark.

“I’m originally from Houston, but as a 10-year-old I moved to Highland Park. In middle school I learned music and I don’t feel like I’m from Houston anymore,” Rudy says. “I fell in love.”

Rudy studied guitar at her new school on the North Shore and continues to be appreciative of the strong arts programs she was able to access in Highland Park, with its emphasis on theater, improv, and the incorporation of orchestra (and guitar) into productions.

“I took a music theory class with Mr. Clark, and it was basically learning the language of music, learning how different chords work with other chords,” she says. “It was classical theory, like Bach … rules that aren’t necessarily relevant anymore.”

She says some of the best advice she received was to learn as much as you can but then leave it behind to pursue creativity.

After graduating from Highland Park High School, Rudy headed to Berklee College of Music in Boston, where she says she placed better as a direct result of Clark’s music theory class. The songwriting seed, planted when she was in middle school, was flourishing.

Insecurities about her own voice led her to start collaborating with other musicians, and she eventually formed a band that played in and around Boston, opening for more well-known artists, such as The Collection.

Rudy released a single in July, “Howling,” with David Wimbish, lead singer of The Collection, just prior to relocating to Nashville. Because if you write songs, either for yourself or others, Nashville is the place to be.

“I’m still trying to get my bearings. My bass player lives here and he’s a good friend of mine. His roommate is going to join my band as well,” Rudy says. “So, hopefully I’ll get to perform at least with the band before the end of the year,”

Part of the Nashville music culture is songwriters performing their songs with other musicians, kind of an impromptu musical collective that allows them to creatively feed off of each other.

“It’s a great place to network and just hear a lot of cool songwriters and whatnot. I have a feeling that that’s most of the performing that I’ll be doing in Nashville,” she says. “I want to be a songwriter versus a straight up performer, but I’ve been sucked into some shows.”

It can all be pretty heady stuff for a young musician just starting out and trying to blaze her path in the industry, but Rudy is quietly undeterred. She is working on a new EP with her band and settling into life in one of the world’s music capitals.

“I’m lucky that I have friends who already live here, who can help me out, and I moved here with some friends from Berklee,” Rudy says. “We’re all kind of going through everything together.”