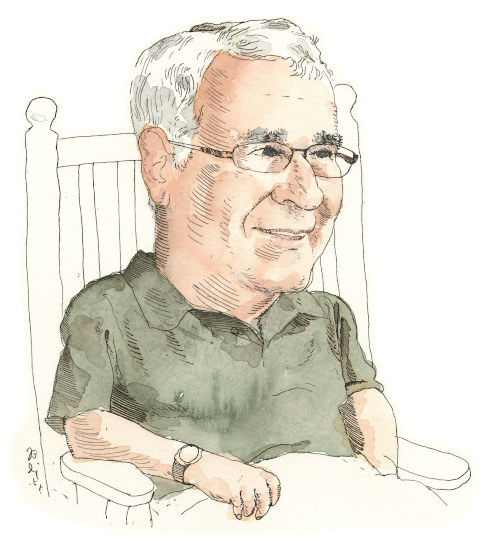 Abe “A.J.” Goldsmith graduated from high school in Chicago on a Thursday and found himself, three days later, in West Lafayette, Indiana—as a freshman in college.

From Lake View High School Wildcat to Purdue University Boilermaker, just like that.

“I was a nerd in high school,” recalls the 92-year-old Goldsmith, who needed only three-and-a-half years to earn his high school degree.

Have smarts, will travel.

But the adult who lived in Lake Forest for 20 years before moving to Fort Sheridan two years ago, took his Halloween-candy-times- 100-sweet time to write his first book, My Journey Into the Realm of Latino Art (Amazon/Kindle, 112 pages). Goldsmith completed it in four years, in 2019, at the age of … 90.

“Art, in general, fascinates me,” says Goldsmith, a former Merrill Lynch broker whose interest in artwork ramped up considerably as soon as he entered Prado Museum (Spanish Museo Del Prado) in Madrid for the first time, in 1965. “I remember, many years ago, walking near the Illinois Bell building in downtown Chicago one day and seeing a sign promoting an art show in the building’s lobby.

“I stepped inside and took a look.”

African American art enthralled Goldsmith initially, before Mexican art caught his eye several decades ago. He hasn’t blinked since. He has bought art in Mexico, has talked Mexican art to anyone with ears, has practically frequented the National Museum of Mexican Art in Chicago at the frequency rate of its dependable docent, and has met numerous Mexican artists at the same museum, located in the Pilsen neighborhood.

“I love art,” says Goldsmith, who wrote reports and crafted features for the Lake County (formerly Waukegan) News-Sun for 10 years after his 25-year career at Merrill Lynch (now just Merrill). “I love finding out about art. I love meeting, and getting to know, artists … all kinds of artists.”

And it certainly shows in his book, cover to cover. Goldsmith’s book contains several chapters about Chicago Latino artists and several who formerly lived in the city. One chapter spotlights Leonardo Nierman, who was born in Mexico City to immigrant parents from Lithuania and Ukraine. Nierman created that striking, 25-foot-high stainless-steel sculpture, “Flame of the Millennium,” which stands near the Kennedy Expressway at the Ohio Street Interchange.

Readers get to learn all about Errol Ortiz and appreciate his colorful acrylic renderings in Goldsmith’s book, too. Goldsmith also writes about Marcos Raya and his street murals. And about painter/muralist Alejandro Romero, owner of La Luz Gallery on 18th Street near Ashland in Chicago. And about Mario Castillo, a Lane Tech High School graduate and Professor of Art and Design at Chicago’s Columbia College, among others. Then there’s Judithe Hernandez, a founding member of the Chicano Art Movement. One of her superb paintings—a commentary on immigration—adorns the cover of My Journey Into the Realm of Latino Art.

Amazingly variegated. In addition to journalist, author, art collector, and investment man, Goldsmith, a veteran, was a technical writer in Fort Worth, Texas, an Armed Forces Chemical Journal contributor, and a four-year student newspaper adviser at the College of Lake County in Grayslake. His primary beats for the News-Sun were Antioch Community High School, Zion, and Pleasant Prairie, Wisconsin.

“Pretty lady, neat lady, amazing lady,” says Goldsmith, who, once again, plans to accompany his wife for a trip to Bucerias, located 20 minutes north of the Puerto Vallarta International Airport. Their fifth visit—at least—to the resort town on Mexico’s Pacific coast begins in early November and ends sometime in April.

“Lynn,” he adds, “has two master’s degrees and a background in social work. Amazing. She’s amazing.”

So was Abe’s grandfather Louis Schar, a Russian immigrant who owned a kosher butcher shop on Kedzie Avenue in Chicago. Goldsmith always looked forward to talking with Grandpa Louis on visits home during his Purdue semesters.

“He’d tell some stories,” the grandson recalls. “But, in general, he was a very quiet man—and a super guy. I looked up to him; he was a big influence in my life. Never made a mistake. Bright, very bright.

“And he read the newspaper every day.”

What Goldsmith is reading today: The Strongest Tribe: War, Politics, and the Endgame in Iraq, by Bing West. A bestselling author, West—in a five-year span—embedded with more than 60 front-line units, discussing strategy and tactics with military leaders.

“I read a lot, and I enjoy watching (news channels),” Goldsmith says. “I re-read a book I found at a Lake Forest Library sale. It’s outstanding, and, considering what our nation is enduring now, it’s more poignant the second time.”

Abe “A.J.” Goldsmith’s book, My Journey Into the Realm of Latino Art, is available at Amazon/Kindle (amazon.com).