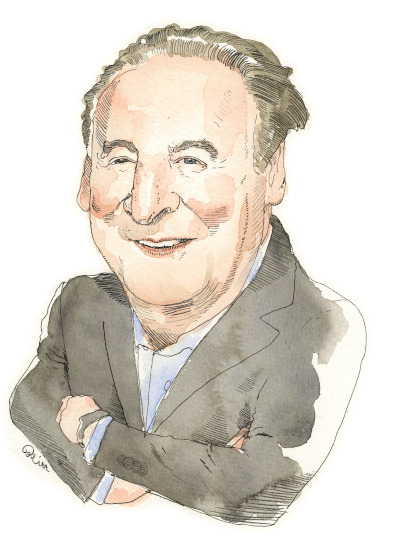 Izzy popped the question before the end of their first date more than 30 years ago.

Wedding Proposal II was staged at the Hyatt Regency restaurant in Chicago, during a dinner date arranged by the ever-patient Izzy. A waiter placed a plate, covered by a silver dome (cloche), in front of Kaye.

The Bannockburn couple and parents of two (Eliana, 24, and Ariella, 22) will celebrate their 28th wedding anniversary on November 13.

The other match made in heaven, involving Izzy, especially if you were to ask his Hospitality Works clients?

Kharasch—dubbed “The Restaurant Coach” by many and “The Restaurant Doctor” by others— launched Hospitality Works Inc. in 1987, back when anyone with a pager was an owner of a cutting-edge device and when the number of restaurant consultants in the country barely outnumbered the number of tennis players in a singles match.

“Spent a lot of time using a typewriter and knocking on doors when I started the company,” recalls the 62-year-old Kharasch, a Army veteran who opened the business, in part, because “I didn’t love working for other people.”

A restaurateur was baffled that his eatery had lost $300,000 in its first year of operation and then called Kharasch, who took a look at the books and speculated the restaurant’s general manager—also the owner’s best friend—was embezzling. Kharasch was right.

The former best friend will likely spend time in jail. About 60 days after Kharasch’s dark discovery, the restaurant started to turn a profit.

Izzy Kharasch, all of the above.

“Hospitality Works (based in Deerfield) has always been all about education because education is the greatest tool,” says Kharasch, who has also helped restaurateurs choose locations, create menus, and design interiors. “Nothing is more professionally rewarding to me than knowing that our clients will be prepared to find solutions on their own after receiving assistance from Hospitality Works.”

Born in Chicago Heights, Kharasch attended now-defunct Rich East High School in Park Forest, where he competed as an all-arounder in gymnastics for the Rockets, with still rings his favorite event, and, admittedly, occasionally focused more on his social life than he did on his social studies homework. He performed the lead role in the school play I Remember Mama and was named “Thespian of the Year” in his senior year.

“Doing theater proved very helpful for me, especially as I entered adulthood,” Kharasch says. “I was never jittery around people after high school. I was comfortable in any kind of public setting. A big chunk of my business is sales, and to be successful in a field like that you’d better be willing to look at people in the eye at all times.”

Doctors from a medical center looked to Kharasch to help them resuscitate their facility’s reputation not too long ago. A business seminar, conducted by Kharasch, led to the connection. The doctors couldn’t understand why scores of online reviews of the center kept coming up negative. Some of the scathing words shocked the docs.

Kharasch took a look at the Google reviews.

And discovered a common thread.

“The criticisms were about the receptionist, the people doing the prep work for surgeries, and the medical center’s accounting employees,” Kharasch says. “None of the negative reviews mentioned any of the doctors; patients were being treated badly by everybody else in the center.

“It became clear to the doctors how important good, attentive customer service is in their industry,” he adds.

Kharasch likes to walk in his free time these days. Often. He bought a Fitbit about six months ago, the device that keeps a running score of a daily steps competition he’s waging with his brothers.

But the activity that counts the most to him is any one that involves the Midwest Veterans Closet, a North Chicago-based organization that’s “like a Goodwill for war Vets,” says Kharasch, who was introduced to Midwest Veterans Closet founder Mary Carmody by his wife, who runs the coffee shop The Wild Roaster in Deerfield.

The Midwest Veterans Closet, according to its website, is a “super spreader of food, goods, and dignity for our military heroes.” It’s essentially a lifeline for veterans who are experiencing homelessness or are at-risk of homelessness. It relies solely on donations to remain open.

The organization will soon offer jobs programs, including culinary training.

Visit hospitalityworks.com for more information. For more about the Midwest Veterans Closet, and ways to donate to the North Chicago-based organization, visit midwestveteranscloset.org or call 847-354-2108.