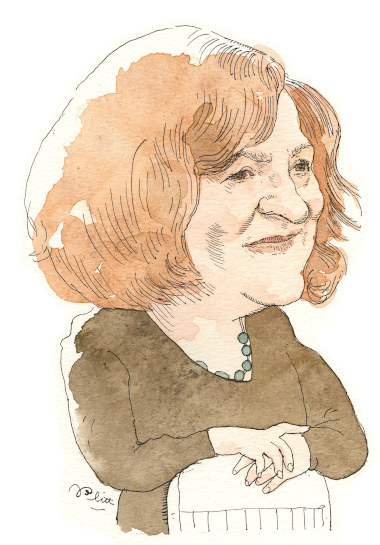 The porthole depicted near the top of the vibrant mural inside the Sunset Foods entrance in Lake Forest doesn’t wink.

But if it did, it would be so Sandie Bacon, the mural’s creator.

“I love the water,” says the Lake Bluff artist and art teacher, who had swum laps at a pool in Waukegan earlier in the day. “I love it as a symbol. My favorite place near water is Monterey Beach in California. It’s where you get to see otters and lots of rocks.

“I’ve always enjoyed viewing the flow of water, the rhythm of waves.”

Interested in being doused with Bacon’s fathomless talent and information on her drawing and painting techniques—without having to fish for a life preserver? Then simply show up at Art Pop in Lake Forest (724 North Western Avenue) on October 23, 1-3 p.m. Bacon—co-president of Artists on the Bluff—was tapped to be the first artist to exhibit their work in a series of Artist-in-Residence presentations.

A joint venture between Artists on the Bluff, Deerpath Art League, and the Lake Forest-Lake Bluff Artisan Guild, Pop Art is a volunteer, nonprofit art gallery installed in un-leased spaces in the center of downtown Lake Forest.

All kinds of art—paintings, photography, jewelry, millinery, and other forms— brightened the days of passersby during the darkest days of the pandemic in 2020.

Each Artist-in-Residence event is free, and at the spotlight- on-Bacon kickoff you’ll also learn all about the classically trained, versatile artist who grew up in Winnetka and was drawn to drawing at the age of 6. She took middle school classes taught by Art Institute of Chicago instructors and honed her craft in New Trier West High School and Winnetka Community House art classes.

“Community art, such as a mural, often encourages the public to talk about art, and it sometimes reminds the local residents of the qualities that make their community special or distinctive,” says Bacon, who, while researching Libertyville before creating a mural for that suburb’s Sunset Foods (1451 East Peterson Road), discovered that future Hollywood legend Marlon Brando had hopped on his motorcycle as a teenager one day and burned rubber in a Libertyville High School hallway.

A Bacon mural can also be appreciated at the Sunset Foods in Highland Park (1812 Green Bay Road). Bacon has completed more than 40 community art projects, including several during her 12 years in New York City. Her “regular paintings”—Bacon’s humble description for striking works that are far from “regular”— have appeared at national and international shows and galleries since around 2005. A regional instructional resource for Golden Paint, the leading supplier of acrylic paint and other art supplies, Bacon has taught at the Evanston Art Center and at too-many-to-count other venues in the Midwest.

In New York she was involved with LEAP (Learning through an Expanded Arts Program), which promotes access and equity for New York City students underserved in the arts.

“Featuring animals has been a big part of my artwork,” says Bacon, a former Bronx Zoo tour guide. “I’ve also used my art to create awareness about the changes our environment is undergoing.”

Brown field was born in Chicago and graduated from Taft High School in 1958.

“He made art personal,” Bacon says. “His art and his teaching had quite an impact on me.”

“He did wonderful portraits,” Malcolm added. “He was continuously inventive. He tried every medium, from fresco to gesso to even body molding. He had a huge sense of fun, with many jokes in his works, like his self-portrait in the form of a hooting chimpanzee.”

Bacon lived on a boat off the Eastern Seaboard for years. On land her murals adorned the walls inside mansions in Newport, Rhode Island.

Remember the imaginative, colorful ceramic dogs that Lake Bluff displayed publicly—or “officially unleashed,” in the delightful words of a clever committee member—to commemorate the village’s 125th anniversary in 2020? Bacon served as an invaluable adviser for the project.

But the Bacon project that will make you stop, or your grocery cart’s wheels halt, for years and years is that 2018 mural inside Sunset Foods in Lake Forest. Its colors pop, pop, pop. The drawing of two trios of carrots, flanking a huge depiction of a tomato slice, highlights the bottom of the mural. Images of to-die-for desserts take up most of the lower left corner.

Visit artistsonthebluff.org for more information about Art Pop, located at 724 North Western Avenue, Lake Forest. Sandie Bacon’s website address is sandiebaconfineart.com. Check out Sandie’s official ArtPrize entries, including “Dragon Kites” and “Sign for Our Time,” from this year and past years at artprize.org/sandie-bacon.