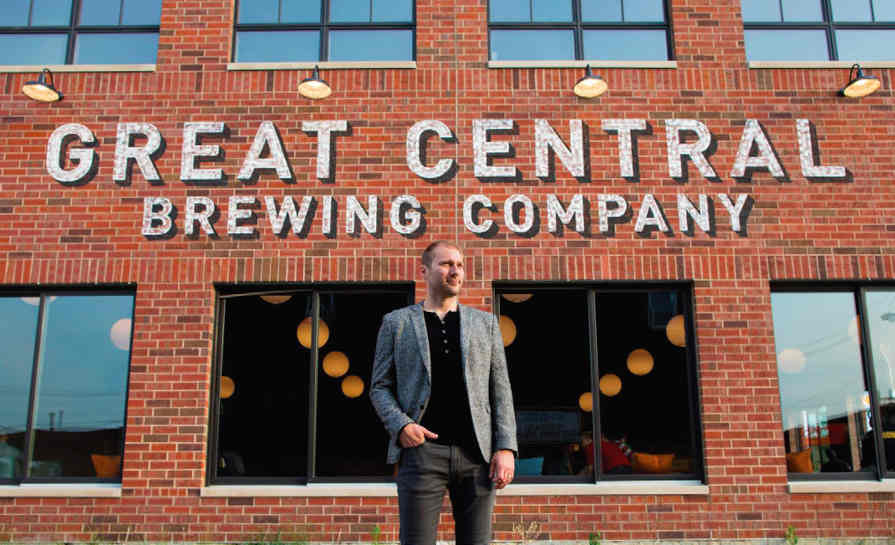 A few years ago, David Avram was working on a proposed project for a brewery in the Western Suburbs. Avram’s family, originally from Aurora, has been in the real estate business for generations.

“I found myself doing what I what I usually do when I start to learn about new things—I dive right in,” the Winnetka resident explains. “I learned as much as I could about the brewing process and as I got deeper into this project, I brought the recommendations to the group.”

One recommendation was to look at options to contract out the brewing. Avram reached out to breweries in the Midwest that had been known for offering contract brewing services. He was not pleased with what he found.

“Frankly. I had a series of bad customer service experiences with many of the contract brewers. So, I started to recruit a team and work on funding and financing for a company, with the idea that we could build something unique to the Midwest,” Avram says.

“I wanted to champion the local entrepreneurs and creative community to try and help them grow and thrive in the process.” 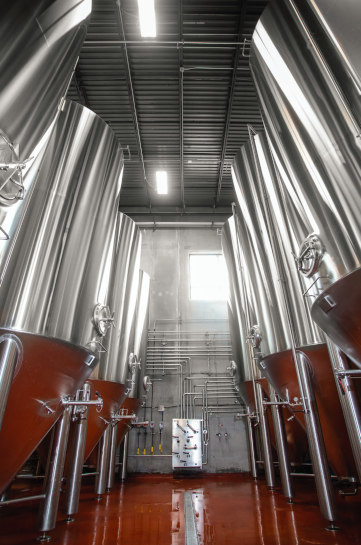 After all, supporting a community and working in a collaborative setting is what fueled his real estate career.

“I’m third-generation in my family’s real estate company, which is Avram Builders,” he says. “I grew up working along my grandfather and my father and learned a lot about business and a lot about the trades from them.”

Though his expertise was mostly in real estate, Avram was always interested in the food and beverage industry. That real estate development background was key to his launching of Great Central Brewing Company.

“I saw that there was a wonderful community of creative entrepreneurs in the brewing space that were all struggling with some similar issues, which is how to scale, finance, and manage growth opportunities,” says Avram. 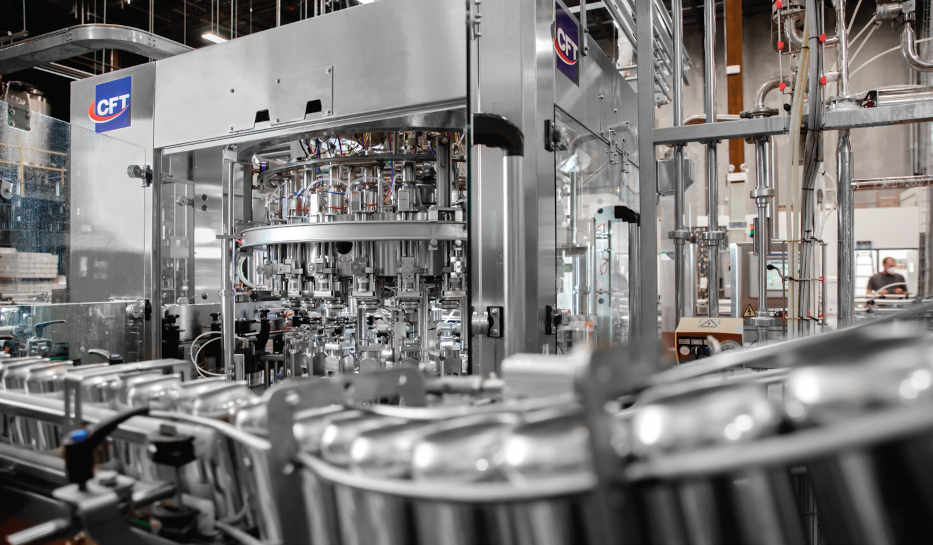 While Great Central was being launched, Avram, his wife Monica, and baby son moved to Winnetka. The family entrusted long-time @properties broker Louise Eichelberger to help them find a home. That connection would serve as a launchpad for Avram’s business network on the North Shore.

“I think we were trying to find a space that was like home to both of us, but similar to the New England area, where Monica is from,” he says. “We like the focus on education and safety, and people really being proud of their hometown area and working together, supporting locally owned businesses. That really spoke to us.”

The values of the North Shore community dovetail nicely with the values Avram infuses into his brewer business, which is headquartered in the Fulton Market District in Chicago. The company brews beers under its own label and also brews beers for other companies and restaurant groups.

“Great Central was founded with the idea that we could serve as a crossroads within the community. We wanted to build a facility that was state-of-the-art, highly scalable, and would function at an incredibly high level from a technology standpoint,” Avram says. “We just believed that if we built something of that caliber, we could be really aggressive about our opportunities to support a growing number of businesses but also to bring our own brand to the market.”

Great Central focuses on German-style beers, including lagers, pilsners, and an Oktoberfest brew. Avram says the idea for the name of the company is derived from the Great Central Market, a moniker for Chicago more than a century ago.

“We are hoping to kind of capture and preserve some of that history in the city,” he says. “As you know, manufacturing and tech startups came into town and we want to honor that heritage, that history, that Chicago ‘can do’ spirit.”

It was Louise Eichelberger who helped connect him to Matt Halack who, with his wife, owns Grateful Bites Pizza in Winnetka. Halack knew Eichelberger’s sons from their younger days and Eichelberger told Avram that the two should meet.

“I had told David that when you’re local here, when you plant your flag, there’s people who are going to want to have your beer because local brewers don’t exist,” Eichelberger says. “That’s exactly what he found.”

Halack was a trader in the pits of the Chicago Board of Trade for 15 years but when trading started to shift online, he decided to look at other career options.

“The trading kind of dried up and so I had to choose a new career path,” Halack says. “We started a catering company in 2012 and it just kind of grew from there. In 2014, we launched a mobile pizza oven, and 2017 is when we opened the restaurant here in Hubbard Woods.”

The classic combination of beer and pizza— and wanting to support local businesses and residents— is where Halack and Avram found common ground. You can find Great Central’s beers on the Grateful Bites menu.

“He’s a good guy,” Halack says of Avram. “I enjoy visiting with him when he comes in. It’s really nice, kind of word-of-mouth community networking. It’s been a positive experience.”

Earlier this year, Avram strolled into Good Grapes, the Winnetka wine shop owned by Theresa Lucas. Baby in tow, Avram struck up a conversation with Lucas. It wasn’t a sales call, but Lucas was intrigued by Avram’s business. Good Grapes sells wine, beer, and a selection of canned mix drinks, including some serious martinis. While Good Grapes is a retail shop, Lucas offers an outdoor space for snacking and drinking.

“People pick out what they want and then I make it up and bring it out for them. I’m in the process of expanding that line, because now I’m getting orders for private parties,” Lucas says

“So, they come in and get a bottle of wine and sit down, and I have some chips and some food, including charcuterie boards.”

Thanks to Avram, Good Grapes customers now have an expanded beer list to choose from.

“David dropped off some samples and customers do my tastings,” Lucas says. “All four people who tasted each of the four beers hands down loved them and said they would buy them.”

Along with her husband, Lou, Julie Rubin owns and operates Hometown Coffee & Juice in Glencoe, and another location soon opening in Winnetka. She runs the shop with values that are rooted in community and treating her employees with respect.

“We have a basic business philosophy, basic fundamentals of business and core values, which we put in place early on,” Rubin says. “Really important to us was that we create a community spot, a place that would be welcomed by customers, both in the neighborhood and from the outside neighborhood, which we’ve done.”

Hometown started primarily as a coffee shop but over the years has built out an expanded food and drinks menu, and sources much of its menu locally. It maintains relationships with local, independent bakers for its pastries and breads. In 2019, it obtained a liquor license.

“We got the license pretty quickly and we started a small alcoholic beverage program which we incorporated within our happy hour,” Rubin says “So, we started doing a happy hour in the spring and summer of 2020, when we were opening up from 4 to 7 p.m.”

After Avram moved to Winnetka he just happened to pop by Hometown, not to pitch, but just to get coffee and a sandwich. Avram introduced himself and he and Rubin chatted about business. A few days later he dropped off some samples of Great Central beer.

“He brought us a couple of his beers and we tried them out. which we loved. Then it took off from there,” Rubin says. “I told him I’m always willing to try a product for a couple of weeks or a month and see how it sells. That’s how we got started. He’s been up with his with his baby and his wife and she comes at least weekly to just patronize us. It’s been really nice, just getting to know him and talking about small business.”

It’s not often that a laundry service plays a role in bringing businesspeople together, but that’s exactly what happened with Fred’s Garage, a restaurant and bar located in an old, renovated service station in Winnetka. Cary Michael, Operating Partner and “Head Mechanic” at Fred’s, met Matt Halack a few years ago when the owner of the linen service they shared introduced them. Through the usual relationships that develop within business industries, Halack connected Avram to Michael and, wouldn’t you know it. Great Central brews are now on Fred’s drinks menu.

“In this industry, if you have a proven track record you have good relationships,” Michael says. “You just kind of find each other. David took an opportunity to swing by and we sat down for a brief discussion. He brought a couple of his beers and we cracked them open and just kind of hung out for a minute.”

The tale of Great Central and its beer distribution is reflective of what many North Shore residents already know and love about “Mayberry on the lake.”

Canned beers from Great Central brewing are available at Good Grapes, Grateful Bites, and Fred’s Garage in Winnetka, and at Hometown Coffee & Juice in Glencoe. The brewery is located at 221 North Wood Street in Chicago and operates a tasting room. Visit greatcentralbrewing.com for more details.