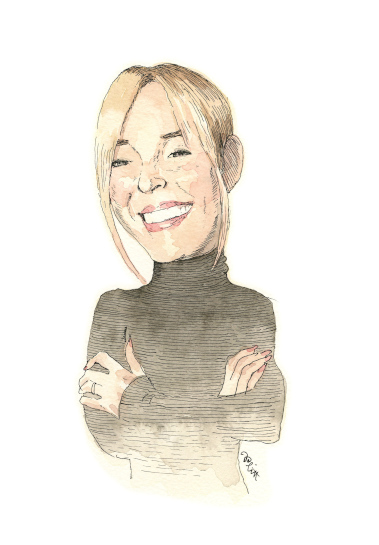 Paige Martin Iseminger says she was loud and engaging and outgoing during her Glenbrook North High School years.

“Some,” she adds with a laugh, “would say I was rebellious back then. I was also the most likely to appear on the reality television series The Real World. I never hesitated to speak my mind. I did not like to be told what to do.”

No wonder Paige Iseminger, now 32 and still living in Northbrook, is an entrepreneur. Like her husband of nearly four years, Ryne (named after Chicago Cubs great Ryne Sandberg) Iseminger, is. Like her father, longtime Northbrook resident Timm T. Martin, is.

“We love ideas, especially business ideas,” Paige says. “We’re serial entrepreneurs. Once my husband and I get started on anything related to a business idea, we can’t stop talking about it. Ask anyone who knows us, and some would probably tell you we’re annoying. But we can’t help ourselves.”

Co-creators of the clothing and footwear online company Festy Besty (founded in 2014), the couple launched Freshie, an organic tequila seltzer, in December 2020. It’s a superior ready-to-go canned spirit (99 calories) featuring citrus notes, sparkling water, lime, tequila, and agave nectar. It’s produced in Mexico, thanks to a partnership Ryne and Paige formed with a family that runs a solar-powered, zero-waste, all-organic distillery in Guadalajara.

“People told us we were crazy to start a venture during the pandemic,” says Paige, who met Ryne—a Loyola Academy graduate who grew up in Chicago and in Glenview—in the first week of their freshman year at the University of Kansas. “But we were excited about the product because, unlike other seltzers out there, a Freshie doesn’t have artificial sweeteners and synthetic flavoring powders.”

Also true: A hangover triggered the creation of the first Freshie. In 2016 Paige had imbibed a tad too many sugary margaritas on a family vacation in Mexico and could not get out of bed the next morning. She needed a “hair of the dog.”

Ryne unleashed his creativity after opening a refrigerator door and prepared the beverage that would stir his future wife. It then became the drink of choice at every gathering of family and friends, as well as at weddings.

The couple’s entrepreneurial spirit and chops took over from there.

Freshies can be found at hundreds of locations—including retail, restaurants, and bars—in Illinois, Georgia, and Tennessee. Mr. and Mrs. Iseminger plan to introduce two other flavors and Authentico by Freshie (a blanco tequila) in 2022.

Some 14 years ago, after she had met her “random roommate” in a co-ed dorm during move-in day at the University of Kansas, Paige thought for sure she’d spend the next four years in Lawrence being single and studying hard.

Until a guy, living in the same dorm, happened to enter Paige’s room with other students for a quick visit one day.

“After he left,” Paige recounts, “I asked my roommate, ‘Who is that gorgeous guy?’”

“Funny, isn’t it?” Paige says. “I had to travel all the way to Kansas to meet someone who had lived so close to me.”

The business majors sat next to each other sophomore year in Professor Wally Meyer’s Entrepreneurship class and came up with a product, a Smart Planner app, and the app’s business plan for a class assignment. Meyer admired it, and the pair’s app later finished runner-up in a competition.

“He told us, ‘Use that as motivation,’” Iseminger says. “He also told us, ‘Always follow your heart.’”

Paige and Ryne loved that class—so much so that they went before the UK Board before turning 20 and convinced it to add Entrepreneurship as a minor.

The first two UK students to graduate with a minor in Entrepreneurship, two years later?

You get two guesses.

“My biggest inspiration has been my father,” says Iseminger, adding her father, an architect/entrepreneur and a huge Freshie fan, serves as CEO of Freshie. “He hustles, he dreams, and he turns his passions into businesses. Such a go-getter, my father. He’s my real-life superhero. He’s all about, ‘Work hard to either create your dream or to create a dream for someone else.”

Paige Iseminger’s No. 2 superhero has four legs. His name is Banksy, an English Cream Golden Retriever and an emotional support animal extraordinaire. He entered the lives of Paige and Ryne several years ago on a December 23, weeks after the couple had survived a horrific, early-morning car accident in Florida while transporting a 14-foot trailer containing Festy Besty merchandise.

“Thank God it was 2 in the morning and not many other cars were on the road,” Paige recalls. “Our Tahoe whipped around, completing at least three donuts. The trailer jackknifed. We got out of the car as soon as we stopped and then ran. I’d never been in a car accident. Ever. I broke down, crying. Ryne, the most positive person his whole life, experienced a full-blown panic attack.”

They lost all their merchandise, but lost something priceless a week later: Luke, the couple’s Golden Retriever, died.

“There we were, a couple of entrepreneurs, with practically nothing,” Iseminger continues. “We had to make calls, so many calls, including ones related to insurance claims. Then Luke died. We were spinning out of control.”

They searched online for a pet and stopped their search as soon as a certain English Cream Golden Retriever appeared. Smitten, instantly. They received him two days before Christmas and named him Banksy, after the England-based street artist who’s anonymous and one of the world’s most talked about artists in the world (and currently featured in a rare exhibit in Chicago).

“Our ‘Christmas angel,’” Iseminger says. “And he’s the world’s sweetest dog. He’s never hyper and he knows how to calm us. Our Banksy boy senses stress or anxiety or sadness in everyone, not just us. People who see him for the first time experience the calming effect Banksy has and usually say, ‘There’s something special about this dog.’

“Our heart rates go down to nothing around him. He’s our saving grace.”