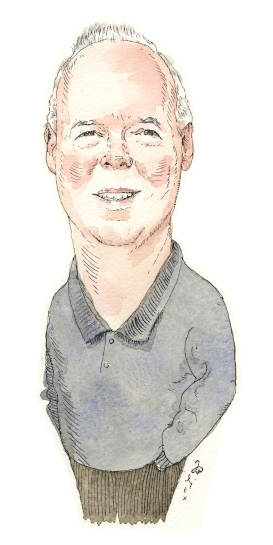 Ever met a man who was born in India, attended Lake Forest Academy, met his future wife in Russia, taught English in Eastern Europe, studied linguistics at the University of St. Andrews in Scotland, wrote about the Czech Republic beer industry in the Czech Republic, and can prepare an otherworldly dish of shrimp and grits in the Midwest?

The first line in the navigation link “About Me” on his website (swspires.weebly.com) is, “Where are you from?”

His answer: “That is not an easy question for me to answer.”

What’s easy to report: The nomadic Spires, a 56-year-old translator/writer/editor, and his wife, Olga, live in Lake Bluff.

He’d never written a novel. Until now. Spires started to pen Abandon All Hope in Prague, in 2002, and then set it aside for more than 16 years because “life intervened” and he probably had to box belongings almost as often as he brushed his teeth.

“I was also stumped,” Spires admits. “I’d written character-based episodes, with no real plot. They were sketches, really, based on my work experiences.”

In 2016 he entered his short story “Everest” in terrain.org’s annual fiction contest and earned runner-up honors. Some three summers later he shoveled the dust off his partial novel and developed a real plot featuring two contrasting protagonists—Eric Freeman, a cynical slacker and realist who enjoys an aimless, unfocused life while working a job he despises, and Evan Jarrett, an idealistic college dropout who styles himself a “philosopher and activist.”

They come from similar backgrounds, having grown up in middle-to upper-middle class suburbia. Abandon All Hope is set in 1998, in the Chicago area. It is scheduled to be published either later this month or early next month.

“It’s a part-workplace, part-philosophical, part-Chicago novel, all blended into one story,” says Spires, the self-dubbed Lakefront Linguist. “I drew from my personal experiences. I typically wrote about 500 words a day after I resumed writing it. I wrote methodically. I used longer sentences, was more literary, when I described Eric. For passages involving Evan, I went with shorter, simpler, less adorned sentences.”

The novel addresses several questions at a time when the American economy was booming, including, “Are you really where you ought to be?” and, “If not, what’s your exit plan?” You might remember most of the 1990s. The decade was heavy on instability, fraud (the echo of the movie line “Greed is good,” uttered by Michael Douglas’s Gordon Gekko in Wall Street, still had legs), social isolation, and all kinds of fear, none more prevalent than unemployment.

But, get this: Spires finished his novel before the onset of Covid-19.

“The novel contains a variety of themes,” Spires says. “To many, the 1990s were stable, prosperous. But concerns were always just under the surface, ready to surface. The fear of unemployment, the fear of a collapse, shook people.

“It was rigorous, academically, at Lake Forest Academy,” Spires says. “But I enjoyed it there. The teachers were interesting and eccentric. I’ve stayed in touch with several of them. I asked one to read my novel as it reached its final stages.”

“I was a Russianist, focusing on linguistics,” says Spires, who started but did not finish his dissertation—“Language Mixing and Language Shift in Southern Lithuania, 1864-1920”—at Oxford.

In 2005, while living in Moscow, he heard of a club that met regularly to practice speaking English. That’s where he met Olga and kicked off a courtship. They got married in 2009. Spires has a stepson, Victor.

“When Covid hit it destroyed a lot of business opportunities to translate,” Spires says. “Restrictions on travel, fewer court cases, fewer business trips … all contributed to tough times for translators. But they’re coming back now, somewhat.”

Spires spends his free time reading and listening to music, all kinds of music. He likes classical, rock, jazz, and world music. He also likes to travel with his wife.

“I’ve become a pretty good cook,” Spires says, hinting nobody would complain a lick about his shrimp and grits, a dish he calls “a Southern thing.”

“Olga and I don’t just enjoy eating at restaurants all over the country; we also love going to them to learn how to cook their entrees.”

Hmm. Sounds like the start of a book’s delicious plot.