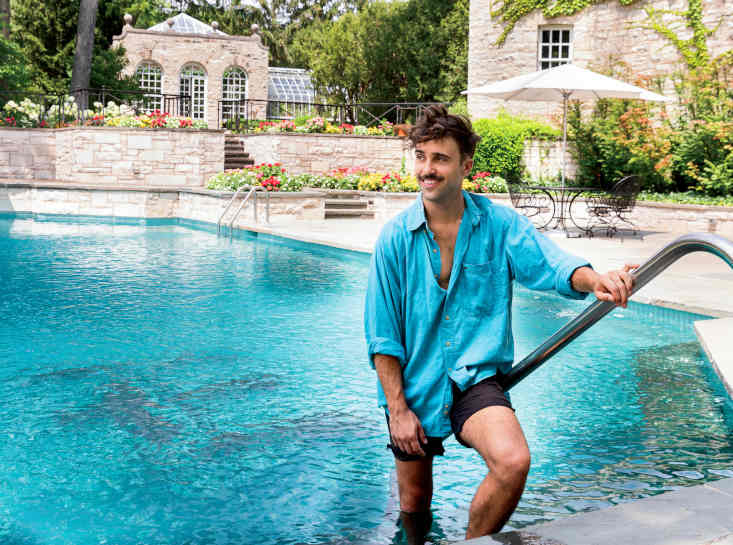 The late filmmaker and Lake Forest resident John Hughes chose to shoot a movie along the North Shore every other month in the 1980s. Or so it seemed. Sixteen Candles. The Breakfast Club. Ferris Bueller’s Day Off. And so on and so on, an assembly line of hits that made popcorn-gobbling teens nod and laugh, elbowing their seat neighbors in the dark.

Hughes was a prolific, ageless creator of coming-of-age flicks. 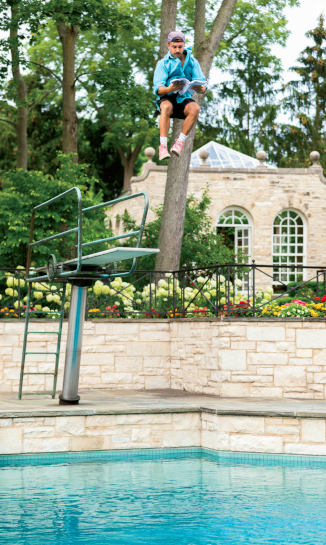 The last time the North Shore served as a gorgeous backdrop for such a movie was eons ago. Or so it seemed. Then Highland Park native and writer/director Sam Hayes entered the picture in the summer of 2020, knocking on doors and taking down names, trying to line up the greatest locations around Lake Forest for a pool-hopping movie. That next summer, Pools went into production. Shooting wrapped on July 18, 2021.

Hayes is 31. Ferris Bueller’s Day Off turned 35 this year.

“He’s always been a huge inspiration. As have Greta Gerwig (director of Lady Bird) and Edgar Wright (director of Baby Driver), who’s so good at using camera movement to tell stories in different ways.” 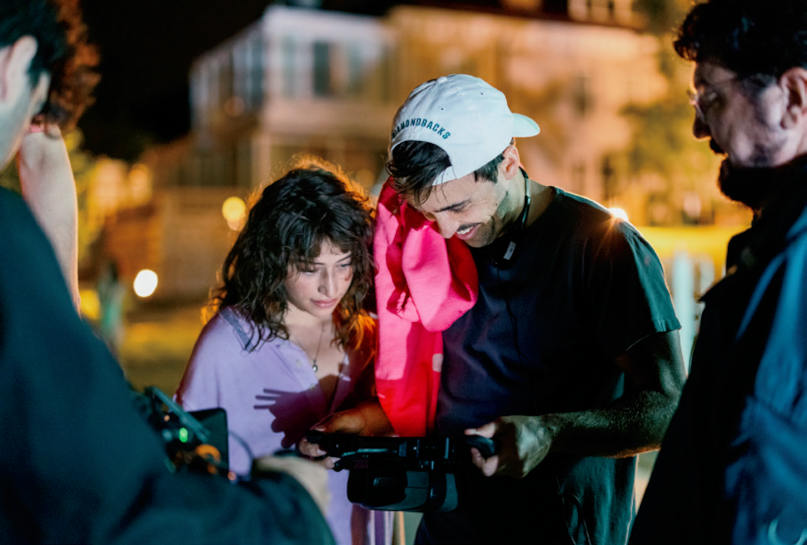 Pools centers on a student named Kennedy (portrayed by Odessa A’zion), who’s stuck at college for the summer because of her miserable grades. When a heatwave breaks the AC in the dorms, she rallies a ragtag crew of pool-hoppers and they proceed to gallivant and splash through the lavish estates in Lake Forest. But, as secrets spill, a wild night of fun becomes a cathartic journey of self-discovery, both for Kennedy and the others. They’re played by Ariel Winter (Modern Family), Mason Gooding (Scream, 2022), Tyler Alvarez (Never Have I Ever), and Francesca Noel (R#J). Little do they know, Kennedy is running away from life as she knows it, and from a tough-loving dean of students, played by Suzanne Cryer (Silicon Valley). But one more curious character cannonballs into the story, our homegrown Michael Vlamis (Roswell: NM), who plays a devilishly charming AC repairman down on his luck, and desperate for a solution.

“We were fortunate to have a super talented cast of young rising stars. And they gave us some truly electric performances,” Hayes remarks. 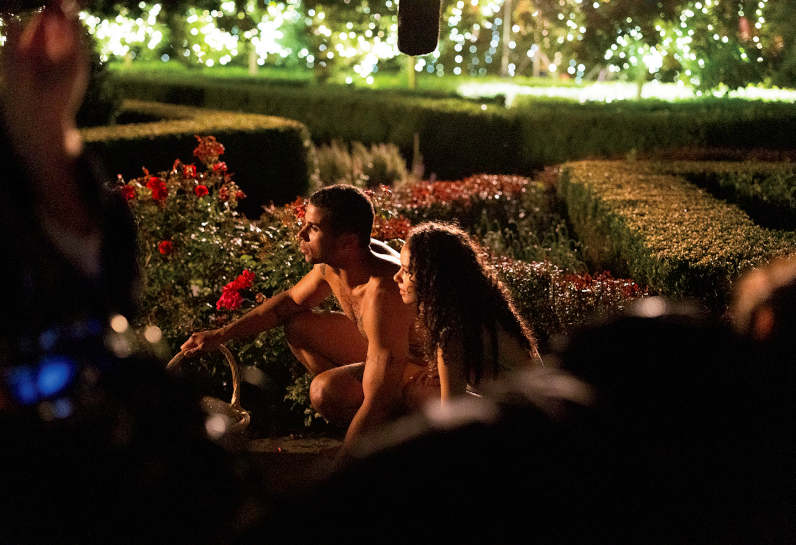 The four mansions featured in the independent film (release date not yet determined) are almost like characters themselves, and each should be seriously considered for Best Inanimate Object in a Supporting Role come Oscar time. Hayes calls the French country estate at 830 North Green Bay Road in Lake Forest (a 1930 David Adler creation, owned by Adrian and Nancy Smith), “An absolute beauty, and the movie’s basecamp.”

Hayes continues, “I met the Smiths through their son, Jason, whom I met through the Preservation Foundation when I was trying to find historic mansions for the shoot. It was a long search that ended with just the right place, and more importantly, people.” 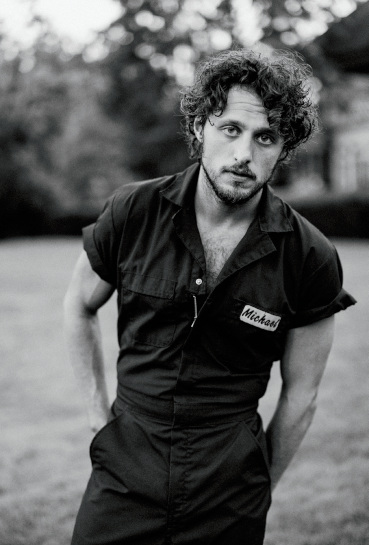 Hayes also shot scenes at Lake Forest College, at Jerry’s Liquors, and Teddy O’Brian’s in Highwood, and at a couple of striking abodes in Lake Bluff, including the mansion owned by Bill and Karen O’Kane that stands stately along the lake at 1717 Shore Acres Drive. The O’Kanes have a massive infinity pool connected by an underwater tunnel to an indoor pool and the crew utilized all of it with underwater cinematography.

Former Chicago Bears defensive end Israel Idonije—a mansion of a man, at 6-feet-6, 275 pounds—cameos as a homeowner chasing the intrepid trespassers. Legendary Bears coach Mike Ditka narrates the film, speaking five times. Several other Chicago connections: Adrian and Nancy’s daughter, Katherine Smith, appears briefly in the film; Vlamis and producer Adonis Tountas grew up in the area; producers Mike Ware and Seth Savoy are based in the city; and a grandson (Jack Heston), of a certain New Trier High School graduate who played Moses in The Ten Commandments, produced the movie.

Grandpa Charlton also shared screen time with a bunch of apes in 1968.

“I read Sam’s script and liked it right away,” Jack Heston, 30, says. “I had to be involved in the project. Sam’s passion is infectious. Shooting the film, with the huge zooms, was challenging but worth it. Sam utilized fun, kinetic camerawork throughout the movie.”

Heston continues, “But I can’t say enough about the incredible views, the estates, the grounds, and the neighborhoods. Chicago’s North Shore, to me, is a living, breathing character. And the support we received from the local communities—what a gift.”

Hayes’ path to a career in cinema began with a present, delivered by a Highland Park High School English teacher in the form of an assignment. Hayes, at the time, had no idea how grateful he’d become for having enrolled in the class.

“How often have you heard English teachers who make their students read a book and then write an essay about what they just read?” says Hayes, who lives in Los Angeles. “My English teacher junior year made us write stories like the stories we read. That’s when I fell in love with writing. By doing it I realized I could do it. Fiction eventually led me to screenplays. Screenplays led me to directing. I wrote Pools with a very specific vision in mind, to direct it.”

A professor in college later challenged Hayes to write a 100-page book. His initial reaction: “Ridiculous, impossible.” But Hayes promised he would try. And 150 pages later—reasonable, possible, it turned out. After that, his career aspirations began to shift from advertising to what felt like far less practical forms of writing.

Hayes’ roots are in fiction. His debut novel, The Weather Man, was published in 2016; before his focus shifted to screenplay. “In fiction, you build the entire world. It’s just you and the reader. I think that’s why I wanted to direct Pools instead of just writing it. It’s really near and dear to me.” Hayes plans to keep writing fiction, but first, he’s got to edit Pools.

Before Pools, Hayes penned the Halloween comedy Costumes Required, which was optioned to Seth MacFarlane. Yes, that Seth MacFarlane, the creator of the longtime television series Family Guy and director of Ted.

“I was a big Jim Carrey fan growing up,” recalls Hayes, who attended Christian Heritage Academy in Northfield before playing basketball and golf at HPHS. “I loved his wacky movies, and later his more heartfelt stories too, like The Truman Show. I wanted to do what he did, though doing anything in entertainment didn’t feel realistic to me until much later.

“But my parents (Stephanie and the late Warren) were always super supportive, never set limitations on me or gave me specific expectations for a career.”

His baby, Pools, kept him up late at night during the last two months of shooting. Sleep was not a priority, or even possible at times. Over a month of shooting, Pools filmed two straight weeks of overnights, shooting from 6 p.m. until 7 a.m. or later, for all 75 people on set. Workdays ranged from 16 to 18 hours for Hayes and other team members. They battled totally unpredictable Chicago weather, constantly rearranging the schedule on the fly to make sure to capture a movie that takes place during a heatwave.

Worth the exhaustion, every day. The North Shore was Hayes’ playground all those years ago. It was his workplace this summer.

“I spent time all over the North Shore when I was young,” Hayes says. “Went to school in Northfield and Highland Park. Had friends in Wilmette and Deerfield, and of course—Lake Forest, where the sweet, sweet dreams of pool-hopping began.”

“I was so lucky to come back and shoot a film on familiar territory. I felt like I had a home-field advantage.”

“The Smiths and the Lake Forest community were so welcoming to all of us,” he adds. “What an incredible family, the Smiths. Being able to call their place home was essential for the movie.”

Who knows? Maybe, just maybe, after Pools’ run in the nation’s theaters, Hayes will be asked to introduce it to an audience at the Gorton Community Center in Lake Forest.

Where, exactly, in the GCC? Where else? At the John & Nancy Hughes Theater.