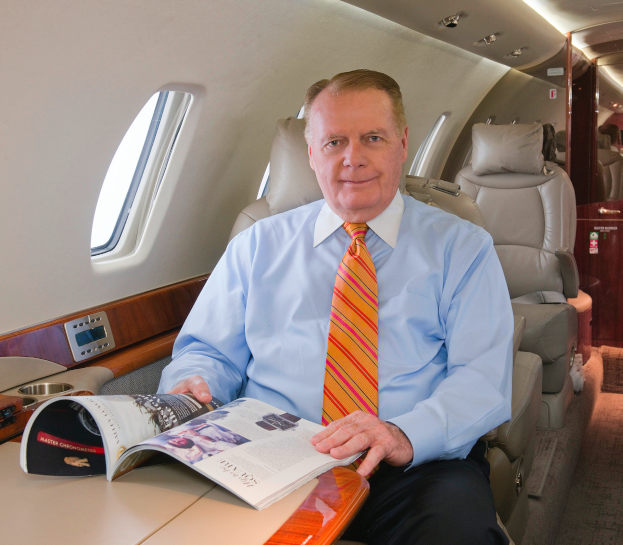 The North Shore community is mourning the loss of businessman, husband, and uncle, Dennis “Denny” M. Banner of Lake Bluff.

Denny, who died at age 78 on July 8, was a quiet giant in the world of private aviation. He and his wife, Susan Banner, were known throughout the Chicago area for Banner Aviation, a company the former Navy man founded in 2004.

According to interviews published in Forest & Bluff magazine and The North Shore Weekend over the years, Denny first discovered his love of flying by taking lessons at the military airport at the suggestion of some of the pilots on his Navy baseball team.

Upon returning to the states, he acquired all his flying certifications with money he received from the G.I. Bill—acquiring a private pilot’s license in 1966. Denny proceeded to spend most of his years since then in the air, sharing his passion with Susan.

What started as a hobby during his tenure as Vice President, Corporate Sales for CBS Publishing, soon became a way of life for the couple. Together they owned over 50 airplanes, including turboprops and jets, as he racked up more than 10,000 hours of flying experience.

And when Banner Aviation was launched 17 years ago, the couple found themselves in the company of many of Chicago’s most notable celebrities.

From politicians to sports superstars (Michael Jordan) and high-profile Hollywood personalities (Oprah Winfrey), the list of clients to whom Denny provided private air transportation and expert advice on private aircraft ownership to a veritable “Who’s Who in Chicago and the Midwest.”

However, those who knew Denny would immediately tell you that he was never one to boast about those connections. In fact, he took great pride in keeping his exclusive list of VIP clients to himself.

“As you might expect, we keep our client list confidential,” he once told a JWC Media reporter during an interview at a Waukegan hangar. “Let’s just say that I’ve worked for some of the most famous figures in Chicago, some very high-profile political personalities, and several television and film stars.”

The difference between Denny (who came to be known as the “Airplane Guy”) and his “lifestyles of the rich and famous” client base was the meticulous work he did behind the scenes to ensure his customers the most intelligent, efficient, comfortable, and cost-effective way to get from Point A to Point B.

Through Banner Aviation, he handled everything from designing airplane interiors to hiring aircraft staff to guiding clients through the complicated and daunting process of buying and/or selling airplanes. If you wanted him to fly the plane himself, he’d do that too.

Denny often said the favorite part of his job was not the glitz or the glamour. He merely loved meeting people who shared his passion for flight and helping them make the right decisions.

As news of his death continues to spread throughout the North Shore and Chicago, he is mourned by friends, clients, and family—including his loving wife Susan (nee Farmer); siblings John Banner, Jim (Laurell) Banner, Kitty (Bob) Seemann, and Ginny Banner; and beloved nieces and nephews. A funeral mass was held in mid-July at St. Patrick’s Catholic Church in Lake Forest.

“He was a lovely husband … a wonderful husband,” Susan Banner told The North Shore Weekend earlier this week. “We are all heartbroken.”

Those who knew Denny say he will be remembered for his humility and kindness. But perhaps the most telling detail about a life well lived can be found in the response he gave in an interview with Forest & Bluff several years ago when asked to name his favorite place in the world to travel.

“Home,” he said. “A successful landing at the Waukegan airport is my favorite destination.”