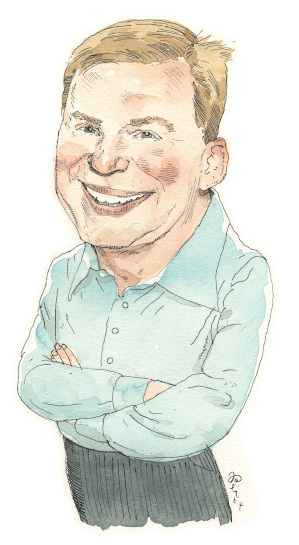 Had Tom Gullen not attended Winnetka Hockey Club’s inaugural WarriorFest in late August, it would have been akin to Lollapalooza without music.

Or an auto show without autos.

The 63-year-old Gullen—affiliated with the Winnetka Hockey Club since 1981, either as a Warriors youth coach or as an administrator—showed up at the gathering held on August 28 at Little Duke Field, south of Winnetka Ice Arena, and faces around him probably lit up like hockey-net lamps do after goals.

“That was a special day,” recalls Gullen, the Winnetka Hockey Club executive director since 2015, when he concluded his 35-year career with the Winnetka Park District as a facilities manager or superintendent. “The hockey club has been a big part of many lives. The event gave me the chance to catch up with past presidents (parents of players, mostly) of the club. I learned something from each of them.

“All,” he adds, “understood the core values of youth hockey and the mission of the Winnetka Hockey Club. Youth sports, lately, have become more specialized, more individualized. But not at our club. We’ve stayed true to our foundation. We’re still a community-based organization that allows good friends to play competitive hockey together. I’m proud of that.”

Players (ages 5-14), hailing from Winnetka, Glencoe, Kenilworth, and Northfield, play on Winnetka Hockey Club Warriors teams. Gullen, a Winnetka resident who lives “a 7-iron shot from the club’s ice arena,” coached one Warriors team, sometimes two, each year for decades. Three of his U-12 squads qualified for nationals, with the best—his 1993 edition—finishing runner-up when the tournament was staged at Winnetka Ice Arena.

“What a neat, fun experience,” Gullen says. “Our home arena’s stands were packed for that championship game. Coaching has always been close to my heart. It allowed me to connect with people, to develop lasting relationships.”

Gullen’s first hockey coach was Bruce Carman. Gullen grew up in Deerfield and played right wing for Carman’s teams. Some practices started at 5 a.m., at a rink in Chicago. Carman drove Gullen, a 1976 Deerfield High School graduate, to those early-morning sessions.

“He did that because he wanted to make sure I’d get to the rink,” Gullen says. “He was a mover and shaker, a comedian, and a man who had a huge influence on me. I loved the sport more than I was good at it. I was the weakest kid on the team, but it never felt that way due to the way Coach Carman coached. Coach Carman built his players up. We liked playing and, thanks to our coach, we never got hung up on wins and losses.”

Gullen attended Southern Illinois University in Carbondale and majored in Parks and Recreation. At age 22 he was hired by the Winnetka Park District as its assistant facilities manager. Promotions ensued, as did the opportunities to coach mad-about-hockey kids.

“I was a demanding coach,” Gullen says. “And probably more vocal than I’d like to admit. I expected a lot and got a lot in return. Outworking the other team was always the goal, right up there with helping our players develop a solid foundation of skills. I always encouraged my players to play hockey outdoors, like I did in my childhood. Outdoor hockey, with friends, was where I had the most fun.”

Gullen had a blast watching Winnetka Hockey Club’s house league championship games on “Super Sunday” in early March. The 2020 “Super Sunday” had to be scrubbed because of the pandemic.

“That Sunday is one of my favorite days of the year,” Gullen says. “It’s rewarding for me to see recreational players, full of passion from start to finish, playing their favorite sport in front of a lot of people. You should see the way the kids celebrate after scoring a goal on a ‘Super Sunday.’”

Gullen is thrilled about the Winnetka Hockey Club’s new hockey director, Chris Wickersham, a native of hockey hotbed Minnesota and a two-time high school state champion in hockey. Wickersham played college hockey at St. Mary’s in Minnesota. He has coached at Tier 1 and Tier 2 levels in Illinois, Minnesota, and Wisconsin since 2006.

“Chris is highly regarded in the field of skills development,” Gullen says. “We’re quite fortunate to have him as our director.”

The director of the skating program at Saddle & Cycle Club in Chicago is a Gullen. Tom’s wife, former competitive figure skater Mary LeBeau Gullen, got named to the post 30 years ago. Tom and Mary have two grown children—30-year-old Meg, of Park Ridge, and 27-year-old Dana, of Lincoln Park—and a grandson named Brooks Thomas Moorman, Meg’s child.

When he isn’t loving life as a grandpa, Tom finds joy on a golf course and on a sheet of ice in an arena. Yes, Mr. Winnetka Hockey Club still plays competitive hockey and has as much fun with a puck on his stick today as he did when hit frozen ponds for games with his buddies in the 1970s.

“High school hockey, club hockey, pond hockey, I enjoyed all levels of the sport in my youth,” says Gullen, who was inducted into the Illinois Hockey Hall of Fame (Builders category) in 2010. “But I knew I wasn’t good enough to play hockey at higher levels after high school. I did know, after my college years, that I wanted to at least be near the sport. Working for the Winnetka Park District led to coaching opportunities with the Winnetka Hockey Club.

“The most meaningful experiences, in any profession, are usually those involving people,” he adds. “Coaching hockey set up those experiences for me.”