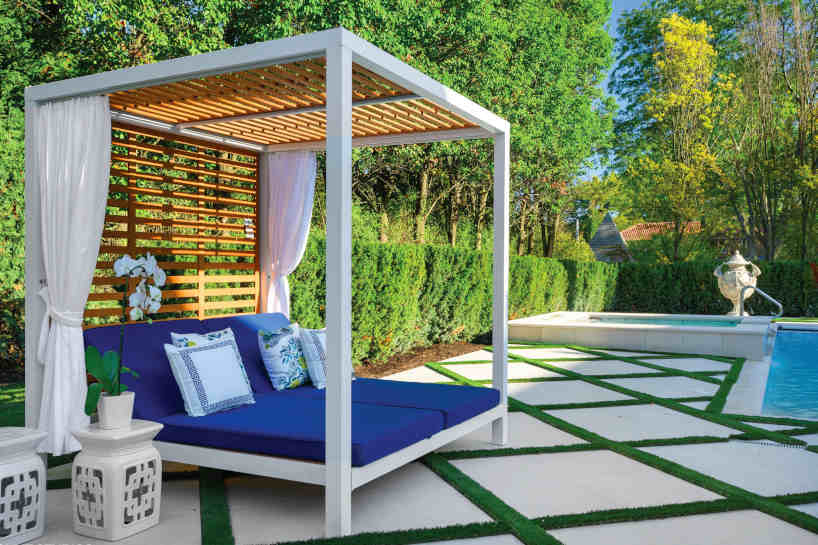 The Versailles at 655 Sheridan in Glencoe, listed by Jena Radnay of @properties, is reminiscent of mansions along the French countryside

It may sound like the proverbial broken record, but the North Shore real estate market once again has stayed strong through traditionally slower late summer months with real estate professionals in the region projecting another strong fall.

“We usually have a little boost after Labor Day and so we have four new listings that we’re waiting to bring on until that Monday and we’re super excited about that,” says Carleigh Goldsberry, with Berkshire Hathaway HomeServices in Lake Forest. “Historically, we see January as quiet until usually right after the Super Bowl, but this year we hit the ground running January 1, so there’s really no telling.” 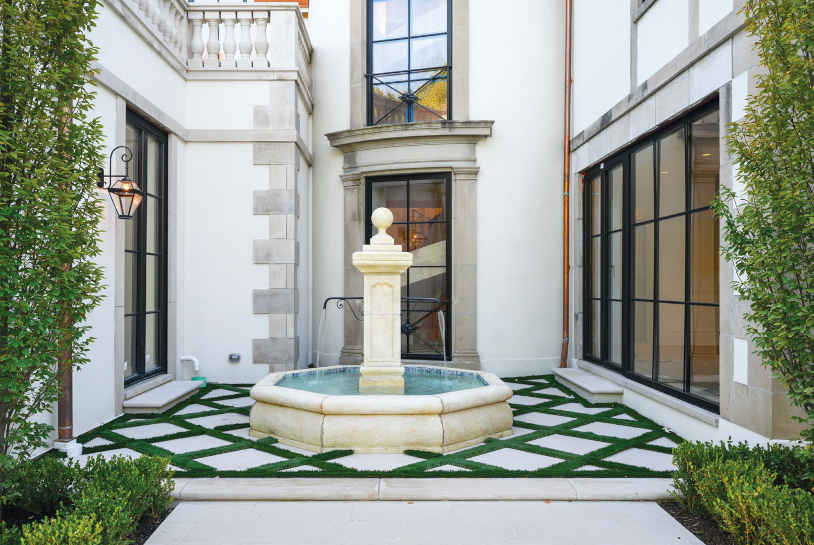 “It’s interesting because nothing about this week is quieter,” Shortsle adds. “Normally, we get nervous and we’re like, ‘It’s crickets’, but it’s been very constant. It’s such a good problem to have.”

“I think the people who have been on the fence have watched this market for the last few months and they’re thinking, ‘You know what? It actually might be a great time now because this market is so strong, and I’m going to actually try,’” explains Goldsberry. “We go on listing presentations and a lot of the sellers already think they’re going to have multiple offers for their homes.” 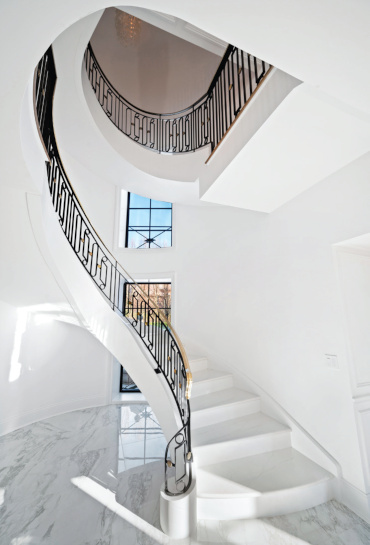 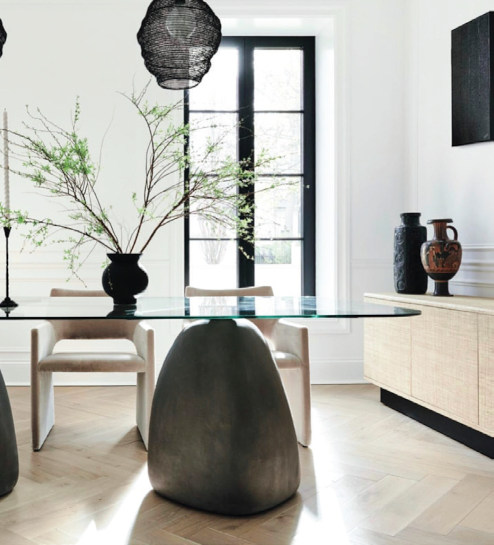 More than 4,000 square feet was added to a home at 655 Sheridan Road in Glencoe, a property which now features more than 11.000 square feet of living space.

Shortsle says they had one house that went on the market in Lake Bluff, had 19 showings in one day, and was under contract after a second showing at the end of the day. She adds if sellers have done a good job maintaining or updating their homes, they will get a good price.

As for buyers, Goldsberry says it’s primarily couples and families who have changed up their thinking about what they want in a home due to the COVID-19 pandemic.

“People want to have an adventure, to change it up. They want to buy a house in a different suburb,” she says. “That’s what we’re seeing. Another thing is people want more land, a pool, two offices, or a gym to work out. They just want something different than the same-old, same-old.” 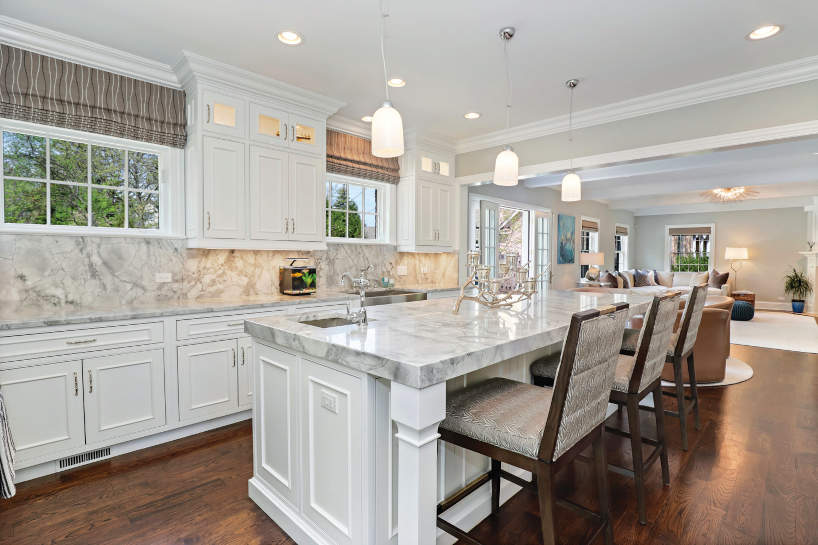 This property at 739 Illinois Road in Lake Forest is newly listed by Carleigh Goldsberry and Kim
Shortsle, Berkshire Hathaway HomeServices.

There are also empty nesters looking to downsize—tired of cleaning and maintaining space they don’t really need anymore. The buyer demographic remains diverse.

“It is really totally across the board,” Shortsle says.

An ongoing challenge remains an overall shortage of inventory and rental inventory, limiting options for sellers even if they manage to draw a premium for their houses.

“We have had to put more people in extended-stay hotels than ever before and they were all very good sports,” Goldsberry says. “We have a whole list of options we send to clients who don’t know where they can go. We’re telling our sellers who want to sell and who don’t necessarily know where to buy to make it work because we don’t know how long this seller’s market is going to last.” 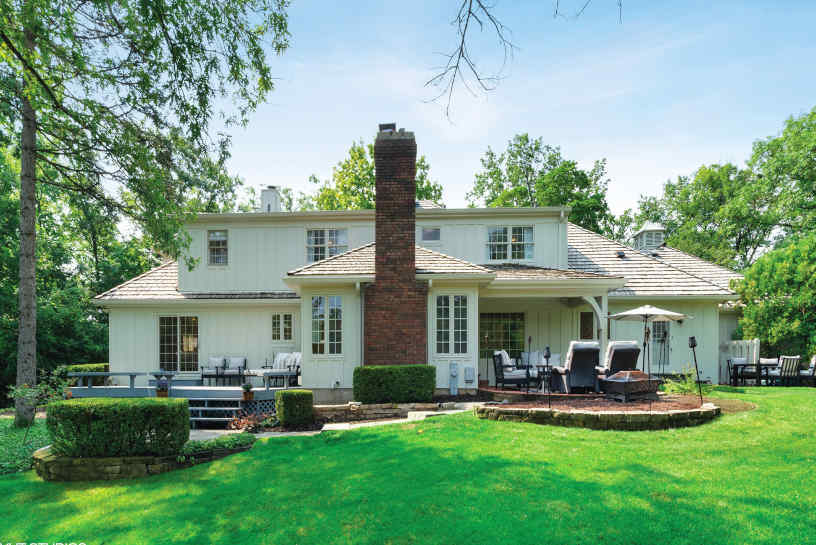 This property at 1266 Loch Lane in Lake Forest, listed by Beth Wexler and Joey Gault of The Wexler Gault Group, went under contract after its first weekend of showings. 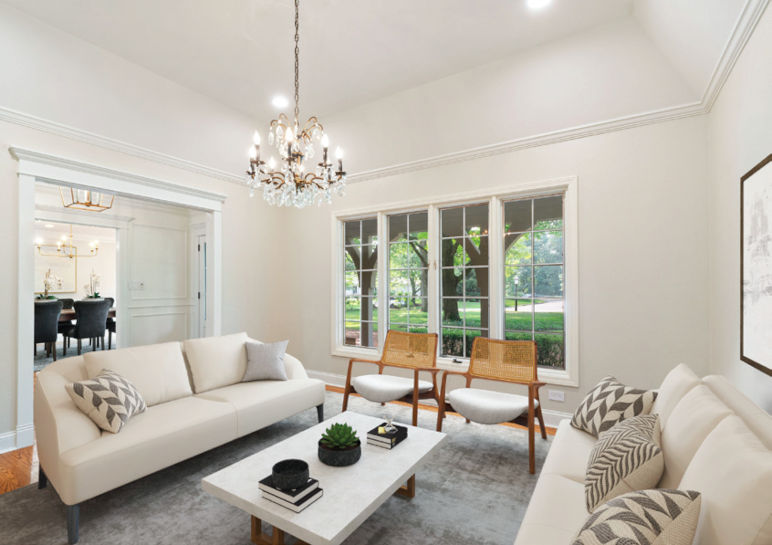 Donna Mancuso, who is also with Berkshire Hathaway HomeServices in Lake Forest, says the core appeal of the North Shore will never go away, and that’s helping keep the market strong.

“The North Shore market has been and will continue to be appealing to those looking to own a home with larger lots with room for a pool and award-winning schools, but still within great proximity to the city of Chicago via train or car,” Mancuso says. “The desire for more space along with historically low interest rates should keep the North Shore market busy.”

As with the other real estate professionals that The North Shore Weekend spoke with this week, Mancuso’s message to sellers is to get their houses on the market.

“This is undeniably a great time to sell for homeowners, and those who recognize this are prepping their properties and pricing them right to take advantage of the seller’s market that is currently still alive on the North Shore,” she says. 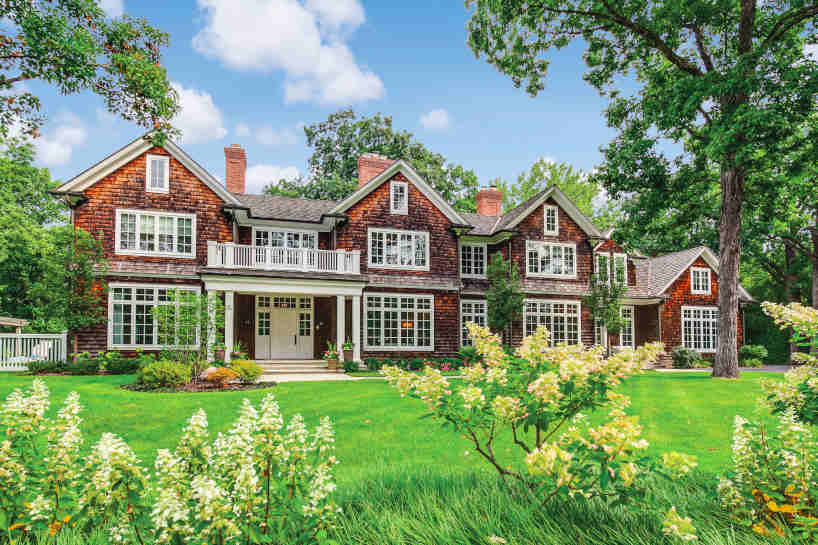 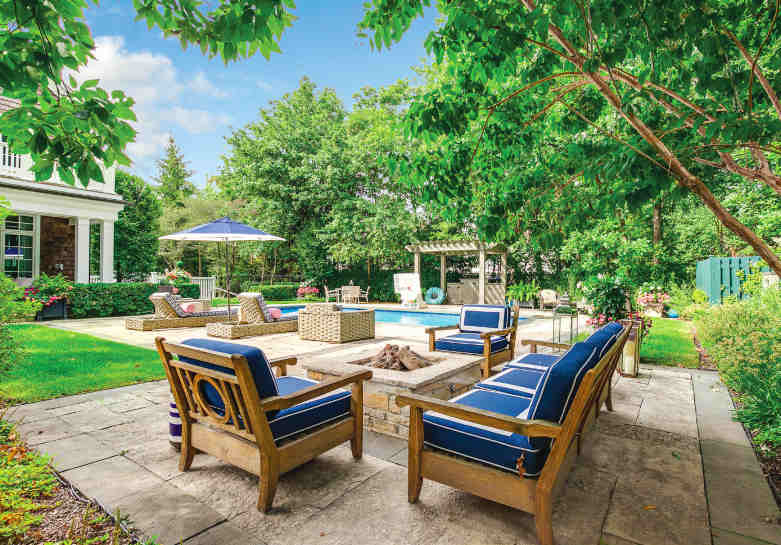 Donna Mancuso of Berkshire Hathaway HomeServices recently listed a home at 680 Ridge in Lake Forest, which features a covered patio that leads to an in-ground pool.

Mancuso is continuing to encourage her clients who are ready and want to sell now that this is certainly a great time to get their home on the market.

“We can’t predict the future in 12 months but based on what we see in front of us at the current time there is no better time to list your home,” she says.

Connie Dornan, an agent with @properties in Glenview, says the reasons the North Shore has historically been desirable are pretty simple.

“This is easy and a no brainer—we have the perfect trifecta,” Dornan says. “North Shore schools consistently rank at the top in the state of Illinois; it’s close to the lake with beautiful beaches; and proximity to the city makes for an easy commute for those who work downtown.” 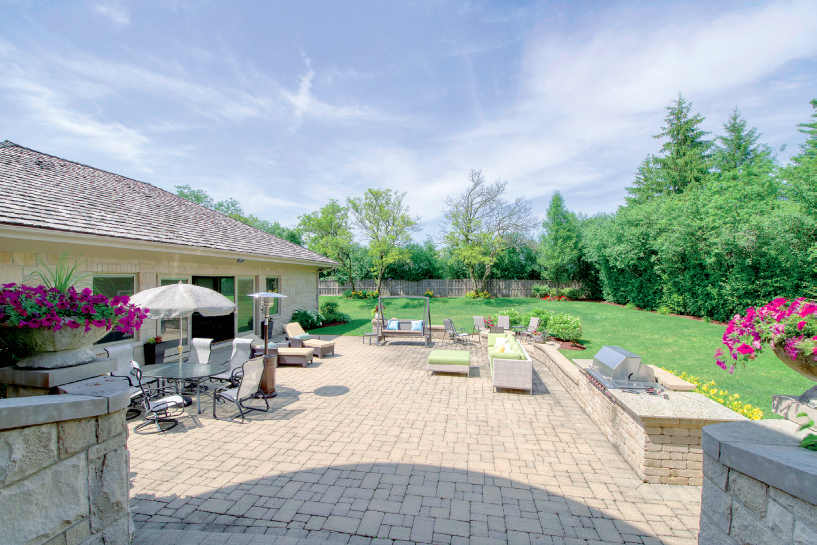 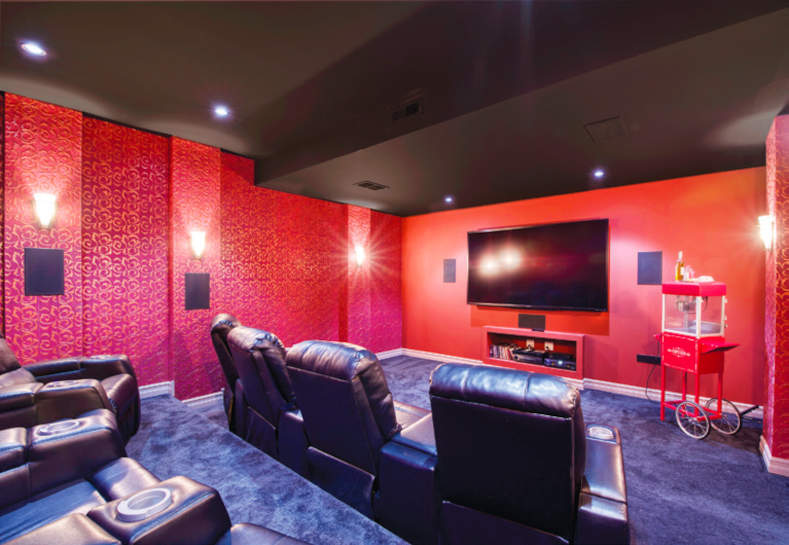 This property at 4200 Walters in Northbrook, listed by Connie Dornan of @properties, includes a home theater and plenty of outdoor space for entertaining.

Despite this appeal, Dornan sees ongoing challenges for buyers looking to find exactly the house they want.

Jena Radnay, a broker with @properties in Winnetka who focuses on the luxury market, says she’s still seeing ongoing challenges regarding inventory in the luxury space, and it’s too early to predict what will happen in the fall.

“We’re still not getting that many good properties coming on. We are not experiencing a surplus,” Radnay says. “I’m not going to really have a read until we move into the fall market, which will be after Labor Day when people kind of rethink their plans and they know summer is over. We’re in a transitional zone right now until after Labor Day.”

Lack of listings on the MLS, or even the private listings, doesn’t mean transactions aren’t happening.

“I’m doing a lot of luxury stuff that’s not even on the MLS or private listings. I’m just doing it on my own. What I’m noticing is sellers don’t want to be exposed, particularly at that luxury level,” says Radnay. “They’d rather sell their house at the right price if I have a buyer, and I have a lot of qualified buyers in the luxury market.”

“We’re still seeing a nice amount of market activity here on the North Shore because COVID-19 has permanently altered the work-from-home situation for many people,” says Chris Veech, a broker with @properties in Winnetka. “Corporations are figuring out their game plans and sharing them with employees, and that’s leading many of them to desire bigger homes.”

Veech says this demand has driven up home values on the North Shore and she doesn’t see that changing with the fall market on the horizon.

“The last 16 months it’s been a great time to be a North Shore seller and values have risen 15 to 20 percent, so that’s encouraging additional sellers to make a move,” she says. “Some of them have accelerated their plans to sell to take advantage of a good market. The families with school aged kids are settling in for the new school year but younger families are still looking and moving, as are families staying in the same school district.”

High vaccination rates on the North Shore—estimated to be between 90 and 98 percent—are also a factor.

“I think we’re going to have another good fall market and a super busy spring 2022 market ahead,” she says. “A lot of the cool kids have been moving to the suburbs over the last 14 months and their friends like what they see here and are following them.”