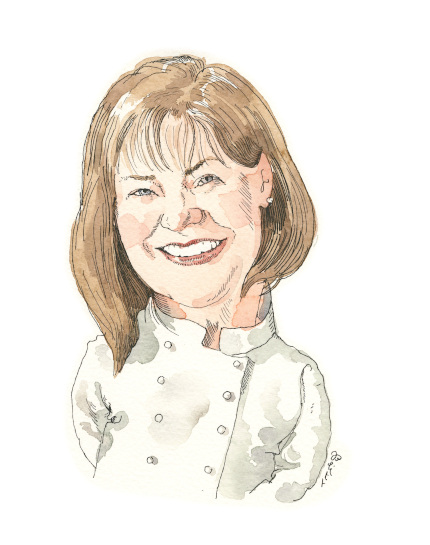 Topping all of those might be her story about the time she roasted a marshmallow perfectly—a feat at a picnic that sparked a relationship with her future husband, Jimmy Seidita, nearly two decades years ago. (Spoiler alert: Jimmy’s impromptu roasting contest was intended for kids only).

But the yarn that still triggers teardrops from the 64-year-old Gand, who hosted the Food Network series Sweet Dreams for eight years and collected a couple of James Beard Foundation awards, is the one about the 19-year-old waitress who arrived at work one day and was asked to fill in for an absent line cook.

“I was a freshman in college (Cleveland Institute of Art), and my manager asked me, ‘Can you cook?’ Gand recalls. “The next thing I know, there’s an apron flying toward me. I was terrified at first. All of a sudden, after entering the kitchen, I looked around and felt a sense of calm. I’d found something comfortable. I’d found my home. I didn’t choose cooking…”

Gand chokes up, pauses, apologizes. “Cooking,” she adds, her voice recovering, “chose me.”

Take a bow, cooking, and hold on to your toque on the way down.

You made a stellar selection.

In 1999, Gand and her culinary partner and first husband, Rick Tramonto, with the backing of Lettuce Entertain You Enterprise’s Rich Melman, opened the French restaurant Tru in Chicago. Gand and Tramonto had launched another acclaimed eatery, Trio, in Evanston six years earlier.

Her Sweet Dreams series was the first nationally televised all-dessert show. Gand, a Deerfield High School graduate, made appearances on The Martha Stewart Show, Oprah, Good Morning America, and Baking With Julia (Child), among other shows. She competed on Iron Chef America and served as a celebrity judge on several shows, including Top Chef and Last Cake Standing.

Books? Gand’s pen is as mighty as her spatula. The author has written eight cookbooks. Gale Gand’s Lunch! (2014) features 150 recipes. The book blurb notes that the “kidfriendly fare was tested and approved” by Gand’s 16-year-old twin daughters, Ella and Ruby, when they were 9. Gale Gand’s Brunch! (2009) is in its fifth printing Gand, who frequently teaches cooking classes at Eataly Chicago, Blackberry Farm in Tennessee, King Arthur Baking Company (formerly King Arthur Flour) in Vermont, and Zingerman’s in Michigan, took part in a cooking demonstration in Las Vegas August 17 to 19.

“It amazes me, still, meeting 25-year-olds who come up to me and tell me, ‘I’m a pastry chef because of you,’” says a laughing Gand, possessor of her Hungarian great-grandmother’s rolling pin. “I guess you could say I influenced them; it’s all my fault. My career in the food industry, approaching 40 years, has certainly been a rewarding one. I’ll never forget, after my first day as a line cook all those years ago, I ran home to my apartment and called my parents (the late Bob and the late Myrna). The first thing I told them was, ‘I know what I want to do! I want to be a chef!’”

Myrna Gand , Gale’s first culinary mentor, must have nodded. Nobody’s aroma from cherry pies stirred the neighborhood like Myrna’s did. Bob Gand—the Bob Gand who owned the Village Music Store in Deerfield for decades, beginning in 1968, and taught guitar lessons and other instrument lessons—wanted Gale to pursue a career in music. His daughter, after all, had performed, at the age of 6, as a guitarist at the University of Chicago Folk Festival and entertained audiences across the United States— and at Expo 67, in Montreal—as a member of the Gand Family Singers.

Dad Gand and Gale attended a Janis Joplin concert together and capped the experience with a visit backstage. That Beatles concert in Chicago, staged at old Comiskey Park in 1965? A 9-year-old Gale Gand was there as a first-time concertgoer.

Guess who could bake a to-die-for cake or an otherworldly pie in the morning and play the ukulele for an audience in the afternoon today. The same woman whose 25-year-old son, Gio (whom Gale shares with Tramonto), met Julia Child at the age of 6 months and started cutting off the tops of strawberries for Mommy at the age of 3.

“There’s still some guilt,” Gand says of having thrived in a highly demanding, fulfilling profession. “I have a lot of friends—talented chefs who work as hard as I do, some harder, but have not been as fortunate as I have been. I’m one of the luckiest in this field. Yes, it’s tough, sometimes working 16 to 18 hours a day. My shoe size was 6 when I started; I’m now a size 9. But I love what I do, love everything about it.”

A holder of a Bachelor of Fine Arts degree (silversmithing and goldsmithing) from Rochester Institute of Technology and a culinary school attendee at La Varenne in Paris, Gand was inducted into the American Academy of Chefs Culinary and Chicago Chefs halls of fame.

“Doing what I do has put me near numerous Hollywood stars and politicians and other famous folks,” a grateful Gand says. “I’ve cooked alongside so many interesting people through the years. To be able to tell a joke and hear Carol Burnett laugh at it … what a memory that was for me. So was hearing that Aretha Franklin liked my peach cobbler.

“Cooking for others,” she says. “The restaurant business, I discovered, can be stressful. Twenty diners might show up, late. Or the restaurant’s cooler is down. Or the cream goes bad. But what I’ve learned, and what I’ve told others, is that everything works out in the end.

“Believe that, no matter what, and you’ll never be stressed.”