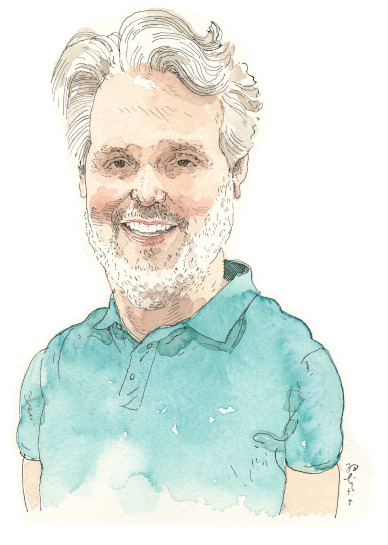 The other delivers fresh food, typically reserved for high-quality eateries, to doorsteps at the homes of men and women, young and old, way more than one day per week.

One helped a team of Wildcats reached the Rose Bowl.

The other cuts out the middleman to connect customers directly with local farms, fishmongers, butchers, and savory fare—via meal kits—from a slew of acclaimed area restaurants, including Prairie Grass Café, Wildfire, and … Big Bowl.

“We thought there would be a demand for what we provide, especially with Peapod no longer around and the number of people choosing to eat at home during the pandemic,” says the 53-year-old Patrick Fitzgerald, a New Trier Township High School graduate and a Highland Park resident for about a year. “People were looking, and continue to look, for fresh, healthy local food. They don’t want to feel guilty about what they’re eating, and we’re helping them spend less time in the kitchen by making mealtime easier.”

Patrick’s father, the late James Fitzgerald, ran Finer Foods for decades, beginning in the late 1950s. Based in Chicago’s South Water Market on the Lower West Side, the produce purveyor saw to it that clients like the Ritz-Carlton and Hyatt and Hilton hotels received only the best, freshest fruits and vegetables.

With Fresh Midwest, James’ son has adhered to the same approach, only this time the kitchens are spaces that are shared by mothers and fathers and their children, not head chefs and sous-chefs.

“Back then,” Fitzgerald says, “there were no large distribution companies. It was a relationship-based industry. It still is, to me. My relationships with farmers and restaurants are critical. We’re partnering with Garwood Orchards (La Porte, Indiana) and Mick Klug Farm (Saint Joseph, Michigan) and other farms. Access to nourishing, flavorful produce is important to us.

“Why shouldn’t consumers at home enjoy the type of fresh food that they enjoy in their favorite restaurants?”

Fitzgerald, a twin with seven brothers and sisters, and his family moved from Chicago to Winnetka when he was 8. Dad would wake up at 4 a.m. six days a week, drive to work in Chicago, and head home between 4-5 p.m. Precious cargo, at times, during the commutes?

“When I was 10, I’d run around where my dad worked and jump onto every box,” Fitzgerald recalls, adding he eventually assumed more serious responsibilities, such as filling orders, cleaning produce, loading trucks, and serving as a dock supervisor, and established sturdy ties with fresh food leaders and innovators through the family-owned, Chicago-based Midwest Foods. “My dad was a little bit of a character. He was an Irish-Italian man. He worked hard. He s t o o d out. I went to two movies with him in my life. Only two. They were Star Wars and Murder by Death. No football games, no basketball games, no baseball games.

Two of Mr. and Mrs. Fitzgerald’s sons played football in high school. Patrick did not, opting to gain income instead of rushing yardage on Saturdays by working in the family produce business. History classes at New Trier fascinated him, especially the years leading up to, and during, the American Revolution.

“I like beginnings,” Fitzgerald says. “I like looking back. I loved history. I found it interesting, what many people in America did and endured to create our union. They had visions.”

Fitzgerald enrolled at Loyola University in Chicago and nearly earned a degree in business marketing. He was a student at the Jesuit Catholic school for three-and-a-half years.

He has two grown children, Paige and Connor. Paige lives in Boston; Connor in New York.

In Philadelphia, a little more than four years ago, a museum opened. Fitzgerald visited it earlier this year. It’s his kind of museum. It’s none other than the Museum of the American Revolution. Fitzgerald flew to the City of Brotherly Love in the morning and returned to Chicago that night.

“It was like entering a church,” Fitzgerald says. “I enjoyed seeing the George Washington stuff. It had all these wonderful exhibits, some for kids. In a way it also was like going to a farm and being able to touch a vegetable. It’s one thing to see a green pepper, for example. It’s entirely different to see that same green pepper up close and touch it.

“That day in Philadelphia, what a great experience that was for me.”

Creating Fresh Midwest experiences for others continues to ignite Fitzgerald, whose passion for his line of work could be described as inferno-esque. Fresh Midwest has been focused, since Day One, on bringing the best of fresh to those who savor the flavors of the heartland. Its produce delivery includes local, organic, and pre-cut options.

Fresh Midwest delivers all of the above.

“We’re all about local,” Fitzgerald says. “All about helping local farmers, local restaurants. And we want people to know that their healthy meals can start with us.”