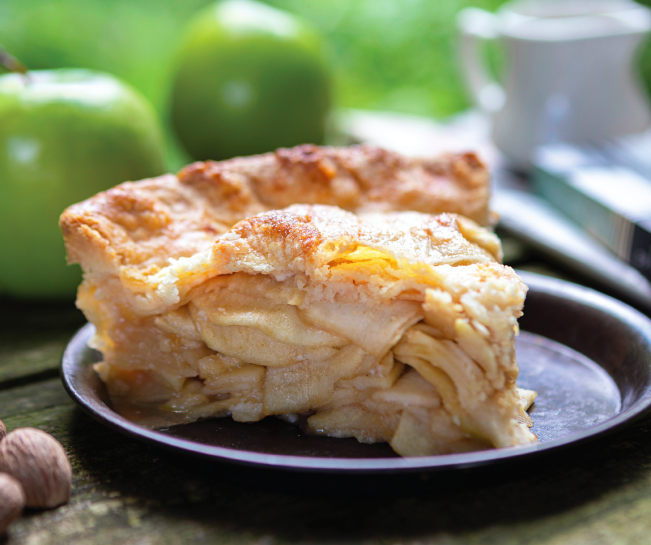 Good recipes are like friends. They come; they go. Some, you may not see for a long while, so that when reconnected, it’s with a flood of happy. Some you may take for granted. Others, you wish you could see more of. Thinking of this, I realized that in all the years I’ve written about vintage recipes, I’ve never done a post about apple pie. Iconic, American, just apple, pie. It seemed about time.

I do have a favorite. I’ve tweaked it over the years to make my own. It’s originally credited to a 1940s grandmother in a community cookbook. I don’t know her name, but sure would like to thank her. This pie is pure and perfect.

It does take some time to make a good pie. So, settle in. Put good music on while you peel, core, and slice the apples. Immerse in the sensory, breaking the little bits of butter into the flour with your fingertips, rolling out the dough. And read that good book or write that letter to the friend you miss the most, while the pie bakes.

• 1 Tbsp sugar with 1 tsp cinnamon for sprinkling on crust

MAKE CRUST: In a large shallow bowl, sift the flour with salt and sugar. Cut the two sticks of butter into tiny pieces and scatter over the flour. Using two knives, one in each hand, pull knives in a motion from the center out to cut the butter into the flour. Then, with cool fingertips, toss and break up each of the remaining larger bits into the flour until it resembles damp sand. Pour in the half and half a little bit at a time and stir with a fork until the dough begins to gather up. Don’t add too much liquid, it’s OK if it’s not all one mass. Cover your clean work surface with two sheets of overlapping plastic wrap to make a large square. Scrape the pie dough onto the center of the plastic. Pull the ends of plastic up around the dough and squeeze and knead through the plastic to form a nice ball of dough.

Cut ball of dough into two pieces. Cover work surface with another two overlapping pieces of plastic wrap. Place one of the dough balls on the center. Flatten with your hands to make a ó inch-tall disk. Cover with two more pieces of plastic wrap. Gently pat out dough through the plastic and then roll out dough to make a large circle. Place plastic wrapped circle on a pizza pan and place in refrigerator. Repeat the process with the other piece of dough; stack second plastic wrapped circle over dough over the first in the fridge. Allow dough to chill while you slice the apples.

MAKE FILLING: Wash and core apples. Cut each apple into quarters. Using a mandolin slicer (and great caution, as mandolins are very sharp!) or a sharp knife, thinly slice each quarter of the apple into a large bowl. Squeeze the lemon juice over all. In a small bowl, combine the sugars, flour, cinnamon, and grated nutmeg. Pour this over the apples and toss to mix well. Set aside to rest.

ASSEMBLE PIE: Preheat oven to 375. Remove one of the plastic-wrapped pie crust circles from fridge. Roll out a bit to ensure the circle is one inch larger than the circumference of your pie dish. Remove plastic from one side of the crust. Flip crust over pie plate and ease into the plate, removing the remaining plastic. Gently nudge crust into the plate, pressing down to make sure there are no air pockets, leaving the excess dough around the circle extending over the edge of the dish. Fill crust with the apples, mounding at the center. Dot with the tiny pieces of butter. Remove second pie crust from fridge and remove plastic from one side, flip to place over the pie, remove remaining plastic sheet. Gently fold and tuck the top crust dough edges over the bottom crust, tucking and folding all the way around the pie. Crimp dough edges with thumb and forefinger, all the way around the edge to create an attractive fluted edge. Brush pie with egg wash. Sprinkle with cinnamon sugar. Cut air vent slits in the top center of the pie. Bake at 375 for 50 minutes to 1 hour until crust is golden brown and filling is bubbling. Remove pie from oven to a cooling rack. Allow to rest for 1/2 hour before serving.